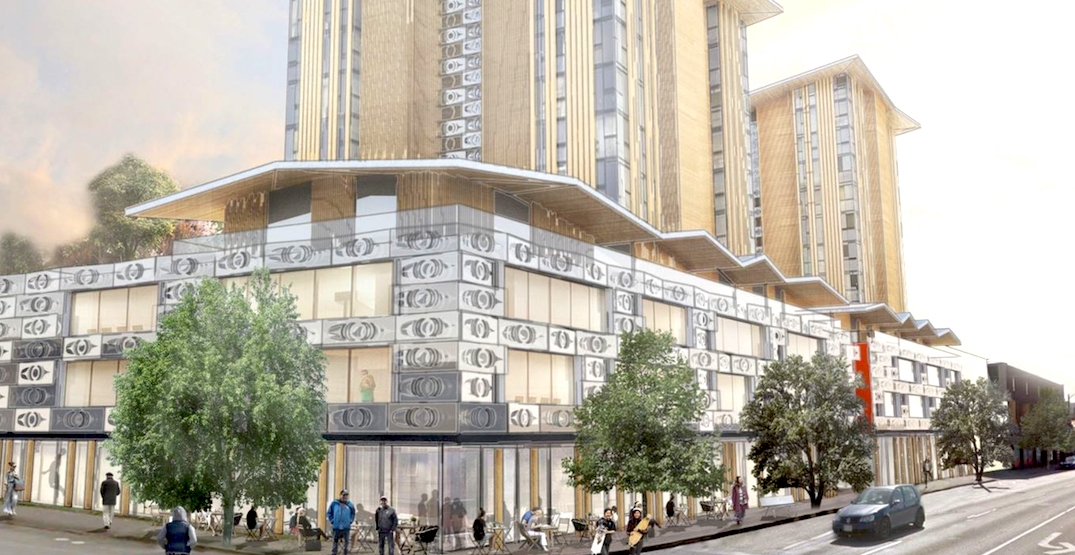 An approved concept plan by First Nations groups for an Indigenous community centre for youth in Vancouver has received the initial backing of the provincial government, with $2.5 million in funding now allocated to advance the business case, design, and planning work.

This will be a new permanent purpose-built home for both Urban Native Youth Association (UNYA) and the Nicola Valley Institute of Technology (NVIT) Vancouver campus.

The project, now years in the making, is planned for the city block at the southwest corner of the intersection of East Hastings Street and Commercial Drive, which entails 1617-1680 East Hastings Street — a lot with UNYA’s existing facility in a 1956-built building, a 1973-built office building owned by the City of Vancouver, and vacant lot that was previously a gas station. 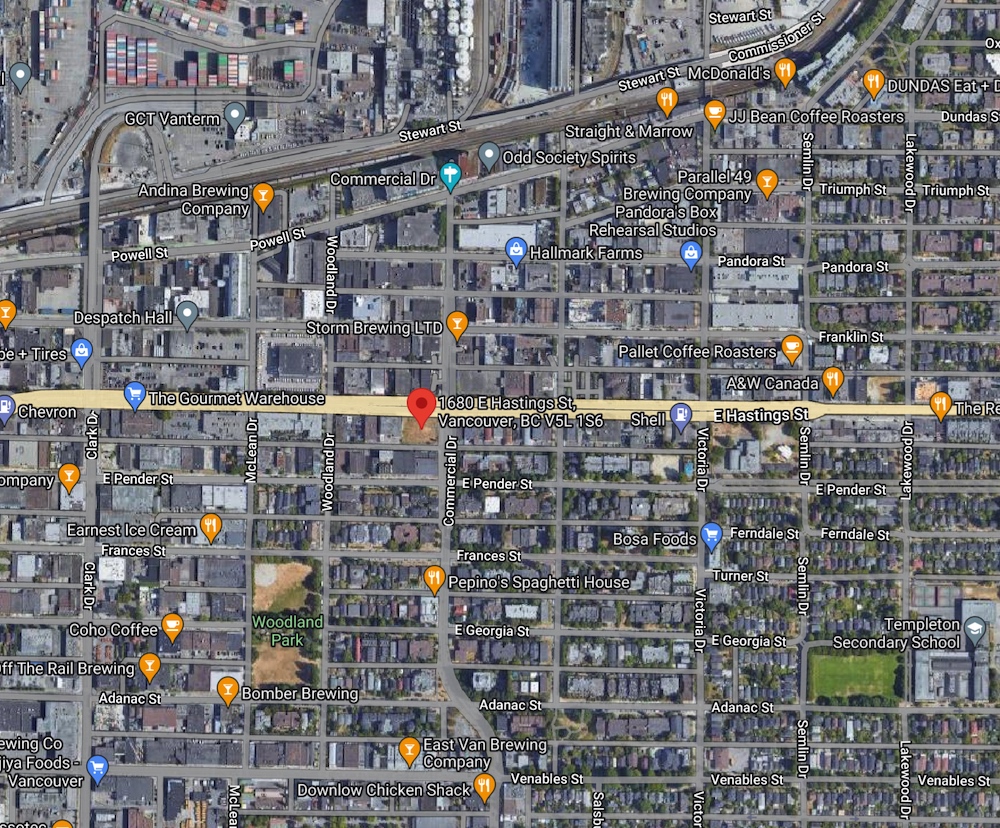 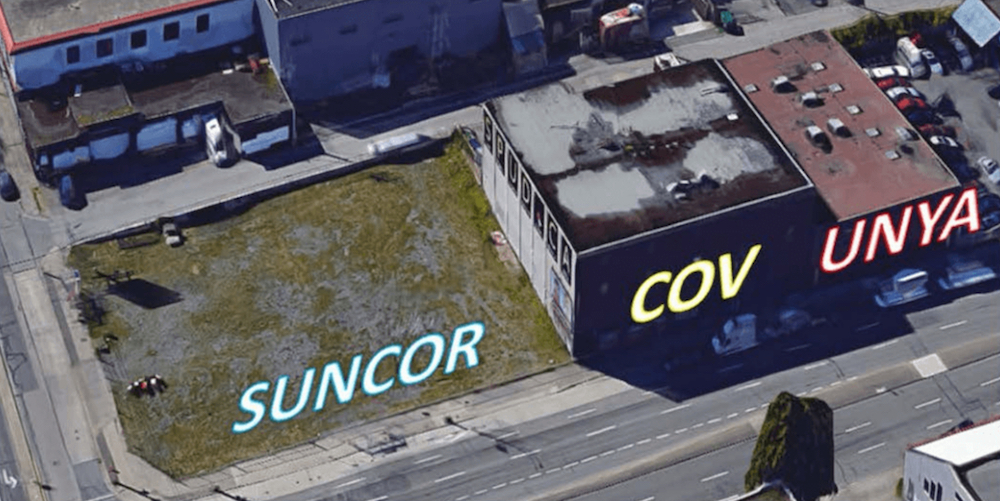 “The realization of this project will not only be a transformational moment for Indigenous youth and their families who live in Metro Vancouver but it will be of an immense benefit to the city and the province as a whole,” said Matthew Norris, president of UNYA, in a statement.

“Indigenous youth and their community deserve a community hub they are proud of whose design represents their voices and interests, and where they feel safe and can access the programming and services that support their well-being as Indigenous Peoples.”

Cheryl Robinson, the CEO of UNYA, states the organization’s programming is currently “hampered by an aging, cramped, and unwelcoming building.”

“UNYA and our community partners have long called for the creation of and investment in an Indigenous gateway and community hub within the city we now call home,” continued Robinson.

These facilities will be shared between UNYA and NVIT, which is currently in leased space in Burnaby — far from many of the students it serves.

The site of the future development is located within the Grandview-Woodland neighbourhood, which is home to about 18% of Vancouver’s off-reserve urban Indigenous population.

NVIT president Ken Tourand adds that the comprehensive complex enables Indigenous youth to receive the support they need through UNYA, and then transition to post-secondary education. 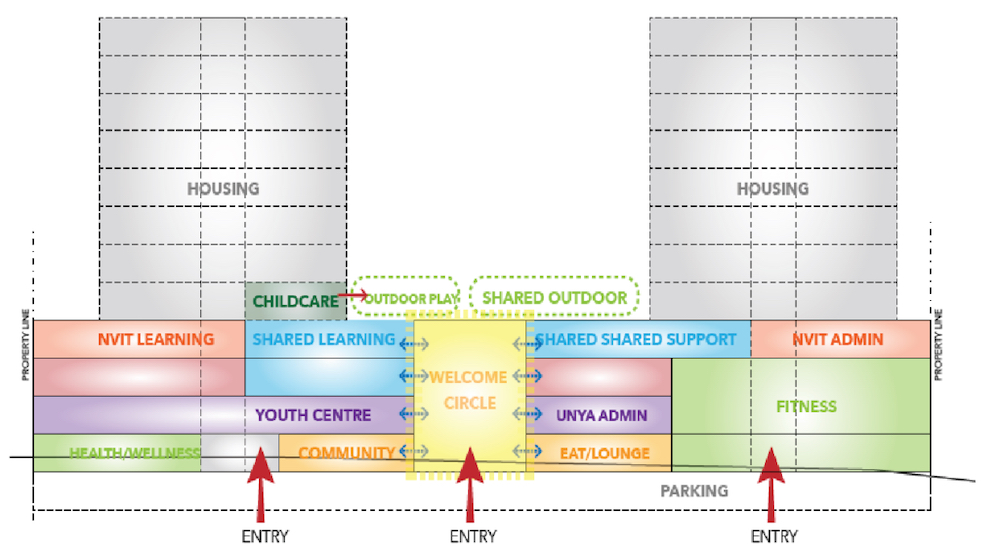 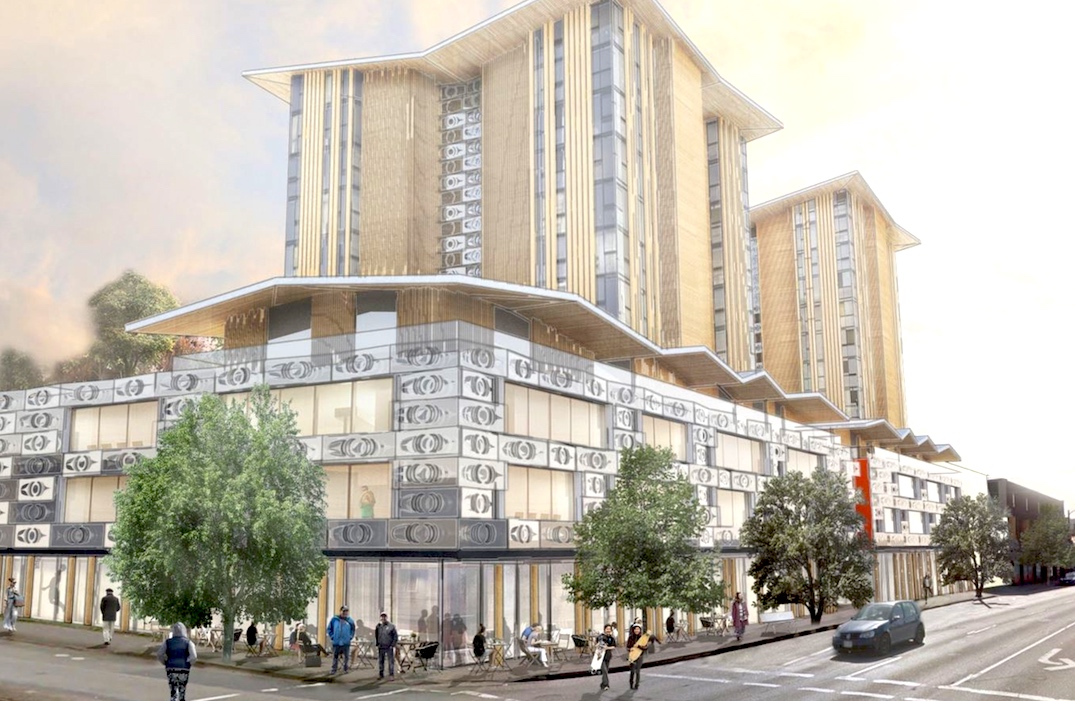 Two mid-rise building forms above the community centre podium floors will contain between 150 and 200 affordable rental homes for Indigenous youth and their families, as a partnership with the municipal government’s Vancouver Affordable Housing Agency. A childcare facility is also envisioned as one of the components.

The complex could potentially also incorporate a wider range of mixed uses such as a community kitchen and cafe, a bookstore, and an outdoor gathering area.

“This new centre will help meet the need and seize the opportunity, serving as a national example of Indigenous-led, transformational change.”