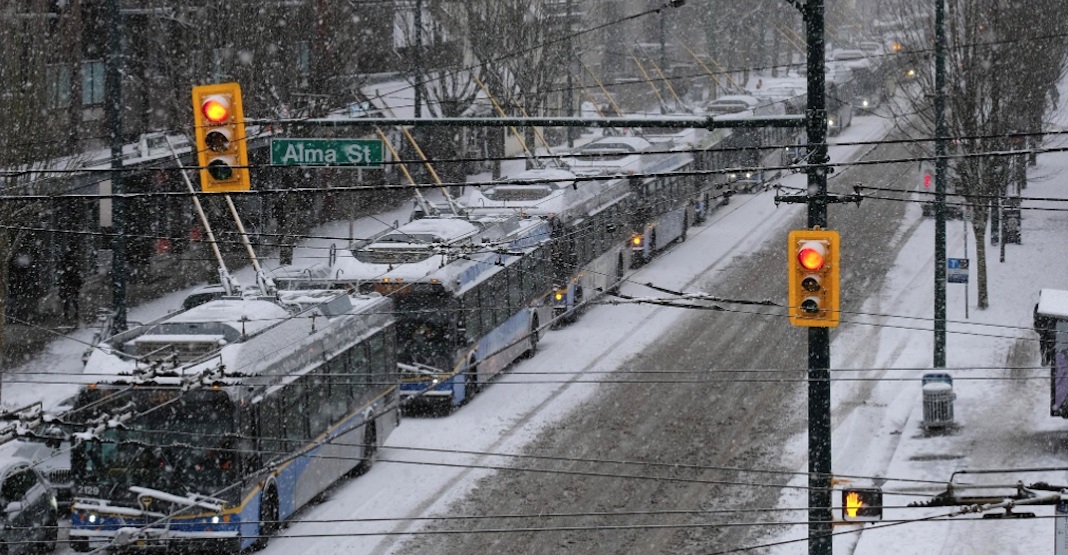 Buses stuck on West Broadway near the intersection at Alma Street in the Vancouver Westside due to heavy snowfall on February 10, 2019. (Linkletter/Reddit)

TransLink is shifting gears by activating its snow plans, now that snowfall is in the forecast starting this weekend.

During severe snowfall events in the past, one particular segment in the Vancouver Westside is frequently problematic for the reliability of bus services. Buses are unable to traverse the steep slope of West 10th Avenue, just west of Alma Street. This is, of course, a major route to reach the University of British Columbia (UBC) campus, with the 99 B-Line and trolley buses transitioning between West Broadway and 10th Avenue on Alma Street.

Despite the importance of this route to campus, keeping the roadway clear during snowfall has been particularly problematic. Over the years, UBC maintenance crews have even been spotted far out of their jurisdiction, driving their snow plows down West 10th Avenue as far as Alma Street to assist City of Vancouver crews.

A photo captured on February 10, 2019 shows an impromptu, bumper-to-bumper caravan of buses, stalled along West Broadway east of Alma Street, unable to make it up the hill towards UBC.

Other measures that are part of TransLink’s snow plan if conditions are severe include replacing articulated buses with regular 40-ft conventional buses, as they are more agile on steep, slippery areas. As well, they will install tire socks on buses that travel along the steep roadways on Burnaby Mountain and on key North Shore and Vancouver routes, where hills and traction are an issue.

On SkyTrain Expo and Millennium lines, attendants will be positioned at the front of each train to improve reliability on the system — limiting the use of automatic emergency braking triggered by heavy snowfall on the track intrusion sensors at stations. A special train that sprays de-icer on the power rail will be deployed, and trains will run throughout the night if snow is especially heavy, as measures to keep the tracks clear.

In the event of heavy snowfall, HandyDART would also be staffed by two people per vehicle to assist passengers as needed.

At the moment, TransLink is working on calling in extra staff to assist passengers and coordinate service, coordinating with municipal governments on snow clearing if priority routes are impacted, coupling Millennium Line trains into four-car configurations to increase capacity while SkyTrain attendants monitor guideways, deploying special trucks to spread anti-icing solution on trolley wires, and installing brass “cutters” on some trolley buses to cut through ice on trolley wires.

Environment Canada’s latest forecast as of 5 pm Friday calls for varying snowfall accumulation of between a trace and five cm across Metro Vancouver overnight through Saturday morning.

Within Vancouver, overnight temperatures throughout the coming week are expected to reach a nightly low that hovers at the freezing point, prolonging the possibility of snowfall.