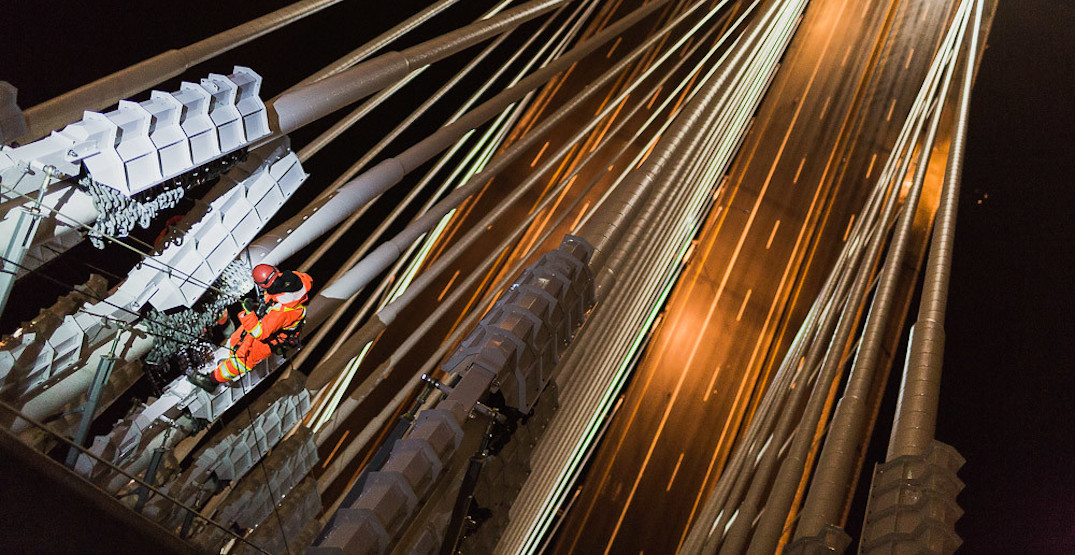 A maintenance worker high above the deck of the Port Mann Bridge, making sure snow and ice busting cable collars are ready to deploy. (Government of BC)

With the convergence of precipitation and freezing temperatures in the forecast, the provincial government stated on Friday its maintenance contractors are making preparations to reduce the likelihood of “bombs” of snow and ice onto two of Metro Vancouver’s most important bridge crossings.

The cable-collar system for removing snow and ice from the suspension cables of the Alex Fraser Bridge and Port Mann Bridge is being activated sooner.

In 2017, a similar system to remove snow and ice was installed on the cables of the Alex Fraser Bridge, following a disruptive winter season that even saw the use of a helicopter to blow wind onto the cables.

The cable-collar system involves maintenance crews climbing up the suspension bridge towers to manually drop chain-link collar rings around the cables. The gravity-driven motion of the collar removes the snow and ice.

“In the years that cable collars have been used, they have been successful in removing most of the snow on the cables. However, some snow may be shed naturally from the cables as the weather warms or if it is blown off,” reads the BC Ministry of Transportation and Infrastructure’s statement.

“As temperatures fall, drivers are reminded that weather conditions can change very quickly. On the Lower Mainland, a cold, rainy day can turn to snow. It is important that drivers do their part by preparing their vehicle for winter weather and adjusting their speed to road and weather conditions.”

As well, the province states its maintenance contractors are proactively applying anti-icing brine when low temperatures are forecast, and plows are on standby to quickly deal with any snow accumulation.

Separately, TransLink announced today there will be non-weather related overnight closures of the Pattullo Bridge next week to ensure the safety of bridge maintenance crews as they repair potholes on the bridge deck. The closures will be from 10 pm to 5 am on the southbound lanes towards Surrey on Thursday, December 9, and the same hours on the northbound lanes towards New Westminster on Friday, December 10.