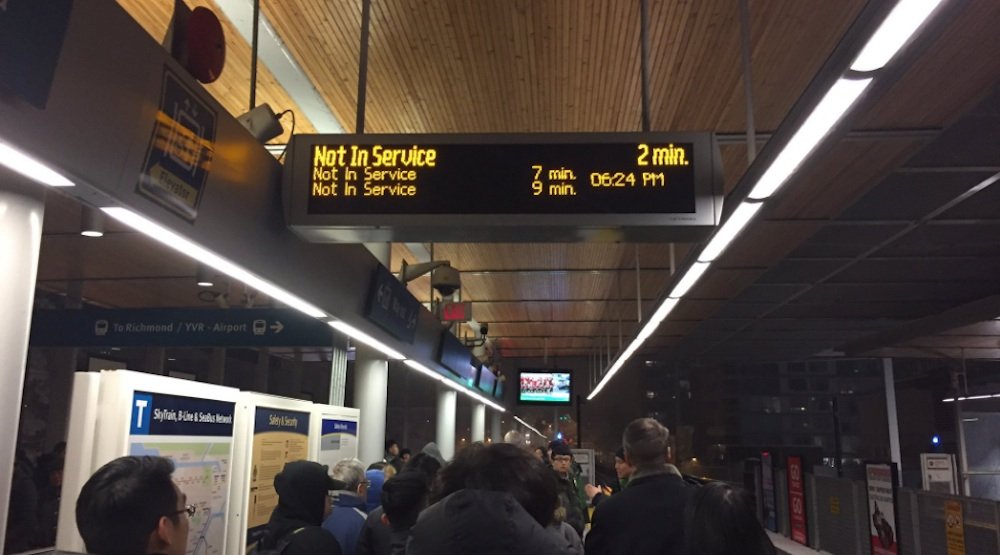 SkyTrain’s Canada Line will likely face another major test this afternoon and evening when heavy snowfall returns to Metro Vancouver.

The train system and transit passengers have endured three major snowfall-induced system disruptions in recent days, with two disruptions during both the morning and evening rush hour on Friday and again during Monday’s evening rush hour. Its small station areas and platforms can barely fit peak hour crowds never mind surges during delays.

But of course, the underground portion running through Vancouver is not responsible for triggering the issues. All three disruptions can be sourced to one problem area: the section from Marine Drive Station to Bridgeport Station – specifically the North Arm Bridge over the Fraser River.

There is a steep incline just south of Marine Dive Station, right before the bridge, causing trains to have great difficulty with running through. As well, snow and ice buildup along the power rail of the exposed sections in Richmond and YVR Airport is also leading to issues.

A spokesperson with TransLink was unable to provide a comment to Daily Hive on the matter, but the public transit authority wrote the following on its Buzzer blog earlier today: “Because of the steep grade, trains require full power when travelling through this section of the bridge, and Canada Line believes ice buildup on the power rail is the likely cause of the disruptions.”

Trains running through this area, across a track switch and up the incline, normally slow to a crawl.

All the while, TransLink says that ProTrans BC, the private operator of the Canada Line, a subsidiary of engineering giant SNC-Lavalin, implemented its pre-emptive measures to prevent snow and ice build-up. And so has TransLink subsidiary BC Rapid Transit Company (BCRTC) for the Expo and Millennium lines.

“With more wintry weather in the forecast, we’re working diligently to reduce the likelihood of this issue repeating itself,” the blog post continues. “Please be assured that we remain committed to dedicating the necessary resources in doing everything possible to prevent recurrence.”

Throughout this six-day resurgence in winter conditions, the Expo and Millennium lines have faired relatively well in the icy conditions with relatively minimal delays. Only major service disruptions have occurred on the Canada Line during this period while short snowfall-induced delays on the Expo and Millennium lines have been mainly a result of snow and ice tripping on track intrusion sensors at station platforms.

Different system technologies, one is inferior

The Canada Line and the Expo and Millennium lines use very different technologies, and the two differences are often under-appreciated.

The technology utilized by the Canada Line is conventional – it is the most widely used in the world. It is simple: two rail tracks plus a power feeder either overhead or on the side as a power rail. The Canada Line has the latter.

Its trains are essentially giant electric cars with moving rotary motors that push the train forward, and with such a design this means steel wheel traction is very important.

This is why ProTrans BC has “sanding trains” as part of its pre-emptive measures, as sand provides traction – the very same reason why municipalities are using sand on the roads.

With poor traction from snow and ice buildup, trains have been unable to climb the incline near the North Arm Bridge.

Comparatively, the technology used on the system for the Expo and Millennium lines could easily handle the same incline as traction as a mechanism is not nearly as vital.

In addition to the two rail tracks and side power rail, the trains on the Expo and Millennium lines use linear motors that interact with a continuous aluminum induction strip, essentially magnetism, along the length of the track. Linear induction motors on the underside of each train propel trains forward, which reduces the amount of moving parts found inside a train and the regular maintenance required.

Linear propulsion systems on trains provide superior acceleration and deceleration and can climb a much steeper grade of 6%, such as the Evergreen extension track just east of Lougheed Town Centre Station and the SkyBridge to Surrey east of Columbia Station.

In contrast, conventional motor systems like the Canada Line can comfortably climb a maximum grade of about 3.5% in optimal weather conditions. 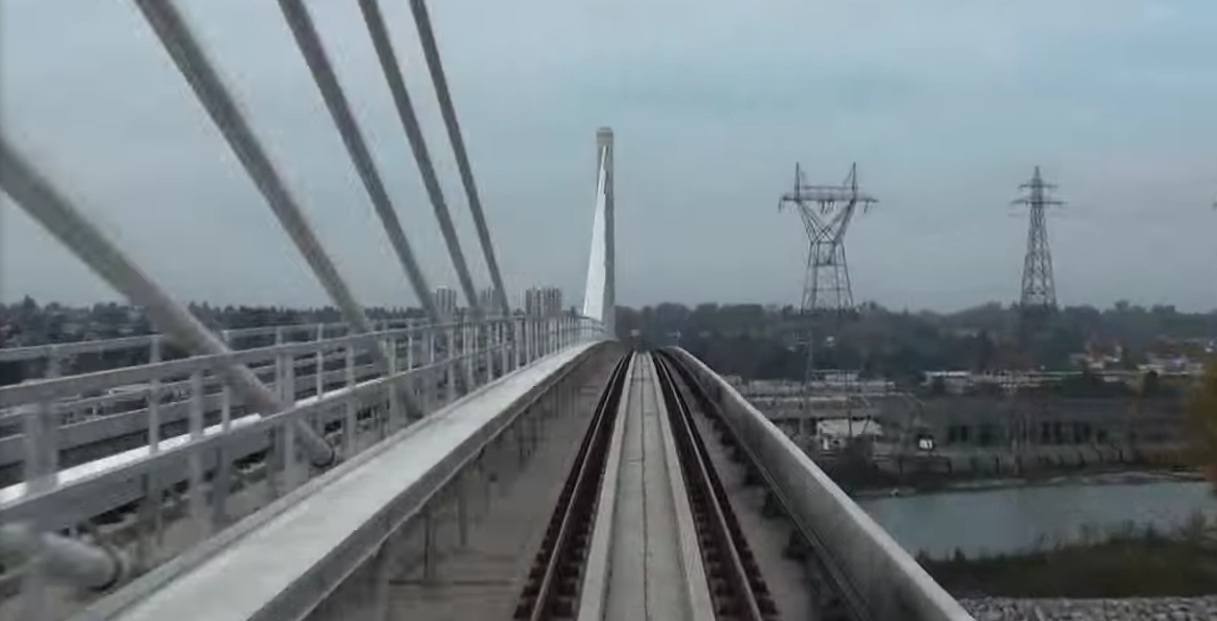 Photo of the Canada Line track which uses conventional technology. Two grey strips located in the centre are concrete blocks as a safety design in the event of a train derailing. (Photo by: radiofreebc / YouTube screenshot) 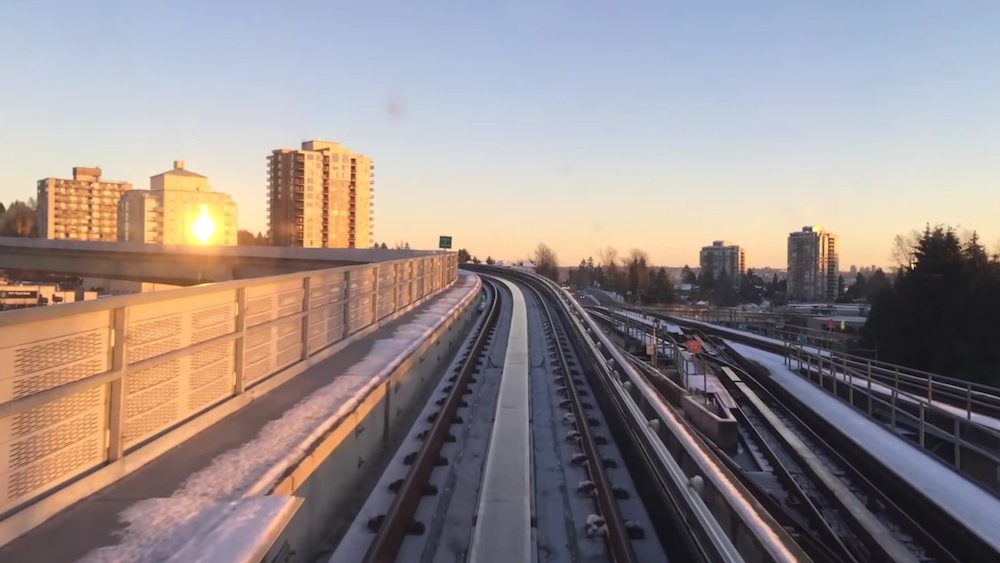 Photo of the track used by the Expo and Millennium lines, showing the aluminum induction strip that interacts with the linear motors on trains. The Canada Line does not have this. (Photo by: Bill Kingsland / YouTube screenshot)

Trains run more frequently on the Expo and Millennium lines

Another major method for keeping tracks and power rails clear of snow and ice is by running trains more frequently. This is also the overnight procedure to keep tracks free of snow accumulation before operating hours resume.

Running more frequent trains as a snow and ice mitigation method is already accomplished by the regular frequent schedules on the Expo and Millennium lines running every two to three minutes during most hours of the weekday.

But on the Canada Line along its exposed tracks beyond Bridgeport Station in Richmond and YVR Airport, maximum frequencies are at best every six to seven minutes because trains from the main line alternate between the two spans to Richmond City Centre and Vancouver International Airport. This is the maximum frequency that can be achieved with the available train fleet.

Snow and ice can quickly buildup in minutes, becoming problematic and escalating into service disruptions.

According to TransLink, only pre-emptive anti-icing solutions were sprayed on the Canada Line’s exposed tracks during the recent snowfall events, but for today’s anticipated conditions there will be a supplemental proactive de-icing solution procedure. This is in addition to the sand that is used on the guideway.

As well, all trains on the Canada Line will be staffed while traveling on the exposed track south of Marine Drive Station in case trains need to be driven manually. Additional attendants and supervisors will be deployed at stations to help customers in the event of another service disruption.

Similar protocols are being put into place on the Expo and Millennium lines with attendants positioned on each train and guideway technicians posted at key stations to quickly respond to track issues.

ProTrans BC will deploy all 18 of its 20 trains on the Canada Line if necessary to handle extra passenger volumes and prevent snow and ice buildup. Frequencies on the Expo and Millennium lines increased earlier than normal today at 2 pm to accommodate people leaving work early so they are home before the snowstorm arrives.