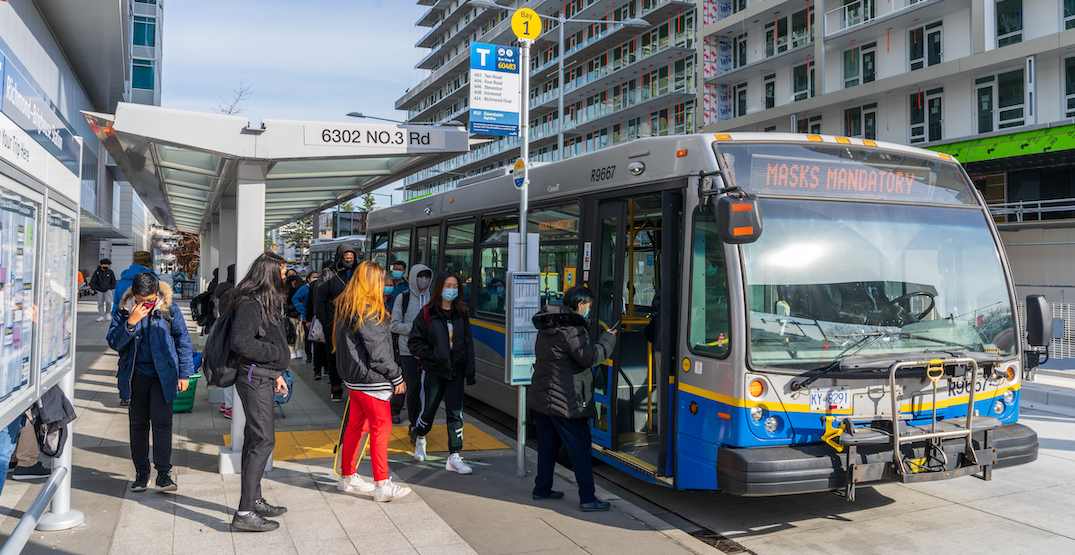 A TransLink bus at the bus exchange for SkyTrain Richmond-Brighouse Station. (Shutterstock)

Metro Vancouver’s public transit system continues to see a relatively strong ridership rebound to the extent that the latest volumes have reached 60% of pre-pandemic volumes.

“In general, TransLink recovery is high compared to our American and Canadian peers,” said Quinn, noting that events like sports games in downtown and Halloween weekend also contributed to spikes.

October 2021’s ridership volumes were 13% higher than what TransLink had originally budgeted for the month.

“What this tells us is that people are choosing transit when they have somewhere to go,” continued Quinn.

“Having said all that, although ridership recovery is outperforming our own expectations and most of our peers, I don’t want to leave the impression that we are going to return to pre-pandemic ridership anytime soon. The fact is that we are heading towards the new normal given the long-term impacts of the pandemic on the economy, travel, and work behaviours.”

TransLink is currently projecting 2022’s ridership levels will range in between 60% and 80% of pre-pandemic levels. Quinn noted that services have been running at nearly 100% of pre-pandemic levels, but this is not financially sustainable without more Safe Restart Funding (SRF) operating subsidies from the provincial and federal governments for the new year.

In September 2020, the federal and provincial governments allocated $644 million in operating subsidies to TransLink to help cover pandemic-related revenue shortfalls between March 2020 through the end of 2021. This SRF was provided for the purpose of providing near-normal service levels to allow for some physical distancing, avoid overcrowding, maintain essential mobility, and avoid layoffs. But this subsidy well is on the verge of drying up.

Currently, based on ridership projections, TransLink is expecting a 2022 operating budget deficit of $46.9 million, which is actually a reduced figure accomplished by using the remainder of the existing funding from the senior governments and drawing on cash reserves. Quinn says a similar financial picture is expected for 2023 as well.

To slow down the financial bleed, bus routes with lower ridership will see slight decreases in their frequencies, starting on January 3, 2022.

Quinn asserts 98% of bus services will be “completely untouched.” As an example, he said, a bus that arrives every seven minutes today could see an altered schedule that sees it arrive every eight to 10 minutes at times when ridership on that route is lower.

He deems it as a “right sizing” of service levels in proportion to their ridership.

“I am optimistic about this new normal and our recovery in the months ahead, but that said, I am also a realist,” he said.

“We have been providing far more capacity on some routes than what the ridership justifies… Making these small bus service adjustments will also help us manage costs over the next year. We will be reducing frequency on a small number of routes with lower ridership while protecting the busiest routes.”

A full list of the winter service changes will be released later this month. No service reductions are planned for SkyTrain, SeaBus, and West Coast Express.

Quinn says TransLink is in discussions with the provincial and federal governments on providing near-term aid extending Safe Restart Funding until the pandemic is over, and long-term solutions on making public transit less dependent on demand-driven fare revenue.

A progress update was also provided by TransLink staff to the Mayors’ Council on the Supportive Policies Agreements (SPA) for the Broadway Subway, which is a contract between the City of Vancouver and TransLink that mandates a planning process to provide added residential and job density around the future stations of the Millennium Line Broadway Extension.

This required planning process, called the Broadway Plan, was delayed by a year due to the pandemic, but it is now in a more refined stage for public consultation ahead of 2022’s steps of finalizing the plan for approval. The city is aiming to add 50,000 residents and 42,000 jobs over the coming decades through high-density redevelopment in the area. A similar SPA exists between the City of Surrey, TransLink, and senior governments for the Expo Line Surrey-Langley Extension, which is achieved with the Fleetwood Plan of adding 100,000 residents around future stations.

It was announced during the meeting that Geoff Cross, one of TransLink’s most public-facing senior executives, will be leaving the organization this month after 13 years.

He has been the head of planning and policy since 2015, overseeing the teams responsible for planning major infrastructure projects and service changes, including the planned SkyTrain extensions, RapidBus, Burnaby Mountain Gondola, and long-term planning such as investment plans, mobility pricing, and Transport 2050, as well as pandemic response planning.

“Geoff has been a rock in the TransLink organization, and I think next to our CEO, the president of planning, Geoff Cross, has really been the face of the organization,” said Jonathan Cote, the chair of the Mayors’ Council and mayor of New Westminster.

“I think where your leadership has really shown through is building that broad planning team at TransLink that has been able to work through and develop some, what I would say, incredible region-leading and worldwide-leading planning initiatives.”

As well, former City of Vancouver chief planner Larry Beasley and former Vancouver Airport Authority executive Tony Gugliotta will be leaving TransLink’s board of directors, as they have both reached the six-year term limit.

During the meeting, the Mayors’ Council also re-elected Cote to continue his role as the chair of the council and Langley Township mayor Jack Froese as the vice-chair. Both mayors have held these roles since soon after the 2018 civic election, with their terms renewed annually.