SkyTrain service will not be running until 3 am on select nights; the cost of extending SkyTrain service later into the early morning hours outweighs the benefits, according to TransLink’s year-long analysis on the feasibility of late-night service.

Based on the costs — financial costs and the impact to overall ridership and system maintenance — it would be more cost effective to run extended bus service.

TransLink announced this morning its findings, which determined that even extending SkyTrain service on Fridays and Saturdays — a so-called 24/2 service, rather than 24/7 service — would require an overhaul of its maintenance procedures and sacrifices that riders would unlikely be willing to make.

The public transit authority says the lost maintenance hours during these periods would have to result in train service ending an hour earlier between Sunday and Thursday to redistribute the maintenance hours, which cannot be eliminated to help ensure SkyTrain’s reliability and safety. Over these five nights, train departures at Waterfront Station would have to end at 12:16 am.

Some closures would also be required on statutory holidays.

While later night service on Fridays and Saturdays could attract between 525,000 and 700,000 boardings annually on the Expo Line and Millennium Line, there are currently about one million annual boardings during the weekday nights. Forecasts show it would result in a net reduction in ridership, displacing many riders who currently depend on late night SkyTrain service on weekdays.

Single-track overnight service is also unpractical due to the limitations of the track design, as SkyTrain lacks the required higher number of switches, unlike the Copenhagen Metro, which is a similar fully-automated rail system, but built with enough redundancy switches to enable 24/7 service.

TransLink would also have to incur real hard costs for later night services on the two nights; about $20 million would be required to upgrade and purchase maintenance equipment, and its annual operating costs would increase by $10 million.

Additionally, TransLink planners reasoned that SkyTrain’s safety systems are reaching the end of their design life, and there is a need to conduct further rehabilitation and renewal work. Further overhauls of SkyTrain infrastructure — track, automatic train control, and substations — require track access when trains are not running, beyond the current overnight maintenance hours.

As well, TransLink suggested that its staff could become overstretched with all the multi-billion dollar SkyTrain extension and improvement projects currently underway.

While longer overnight train hours are highly desirable, benefiting healthcare, restaurant, and other nighttime workers (and especially low-income individuals and young people), these extended operating hours are an exception around the world and certainly not the norm. Only a handful of subway systems operate around the clock, including New York City and London.

Instead of running SkyTrain later, the public transit authority plans to significantly improve its NightBus, including the launch of a new NightBus Express Service (NES) that ‘shadows’ and mimics the routes of all three SkyTrain lines by only stopping at SkyTrain stations or select SkyTrain stations, with routes starting from the recently-implemented NightBus District hub at the intersection of West Georgia Street and Granville Street.

Another NES route would also replicate the SeaBus, running from the NightBus District to Lonsdale Quay via the Lions Gate Bridge. 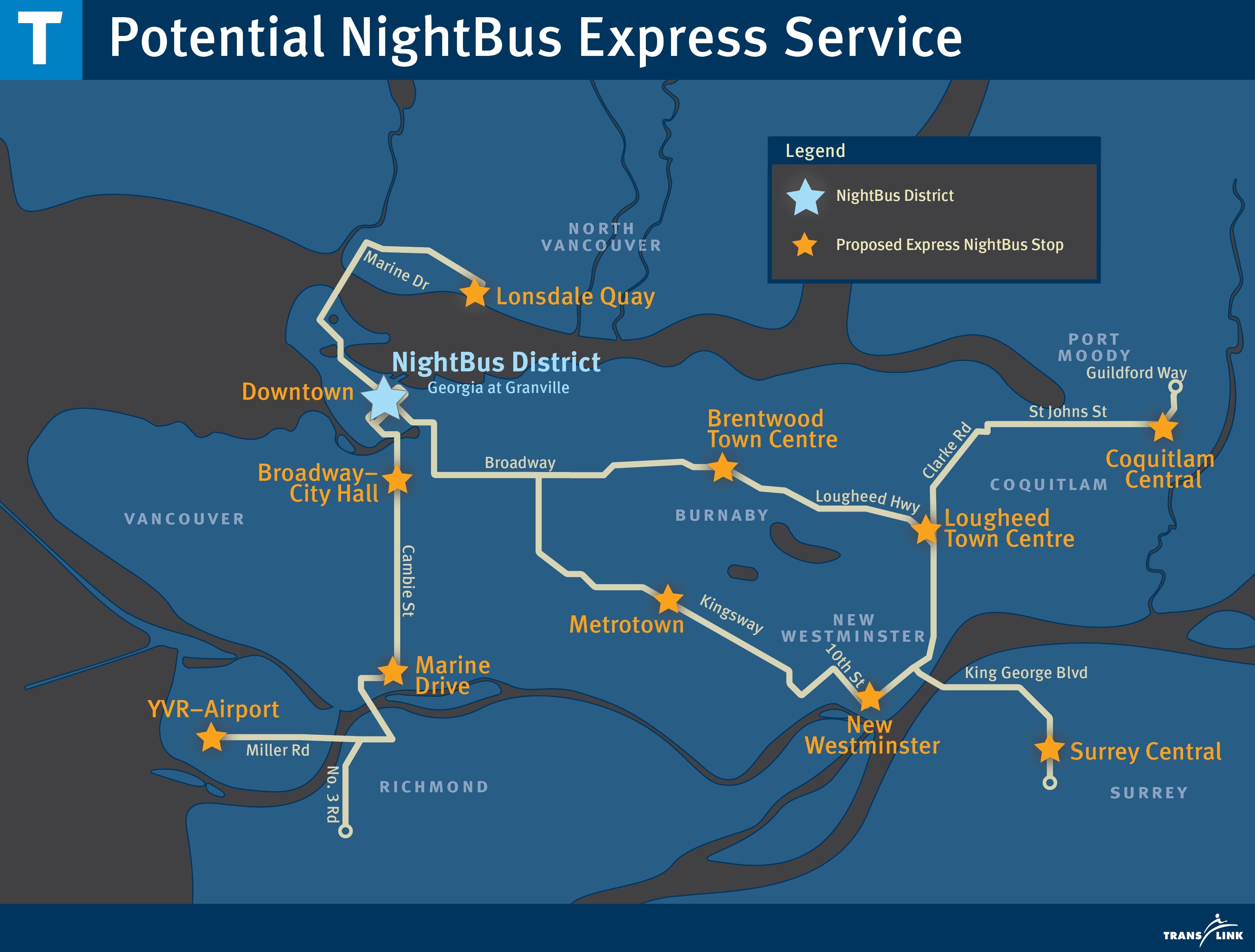 The NES would fill the entire overnight gap, from the last train to the first train, not served by SkyTrain, but more work still needs to be determined on the frequency and exact routing of the services.

TransLink also anticipates a sizeable share of the overnight transportation demand will be met by rideshare services, which are slated for a launch by the provincial government sometime this fall. It will work with taxi companies as well to see how they can be coordinated to serve late night riders.

However, the NES still requires finding funding, estimated to be about $4 million annually, to support the additional bus hours.

“I believe this option will make a difference,” said TransLink CEO Kevin Desmond. “We can roll out relatively quickly and easily once funding is secured, whereas running SkyTrain all night on weekends would negatively affect more customers than it helps due to significant scheduling and cost trade-offs required.”

During today’s Mayors’ Council meeting, there were discussions on potentially using contingency funds to expedite the project and seeking funding from the provincial and federal governments.

Until funding is secured, no timeline for the launch of the NES can be established.

In the meantime, TransLink says it can quickly expand the existing NightBus program, including extending the N17 — from downtown to UBC — to run throughout the night until the start of regular service starting on September 2 and adding trips to the N19 between Vancouver and Surrey later in the fall.

The N15 on Cambie Street from downtown Vancouver is being simplified to create a more direct service to Vancouver International Airport, without a detour through Richmond.

In 2020, TransLink will undergo another round of NightBus service upgrades by increasing service on nine routes.

TransLink has already seen some successes with improved NightBus service from the new NightBus District, which resulted in a 21% uptick in NightBus ridership following its launch.

“After seeing the success that came from the launch of TransLink’s NightBus District last year, we’re hopeful that a NightBus express service would strengthen downtown Vancouver’s nighttime economy and help even more people return home safely from the downtown core,” said Charles Gauthier, president and CEO of the Downtown Vancouver Business Improvement Association.

“This will be the most efficient way to extend late-night transit services, and we look forward to seeing it implemented.” 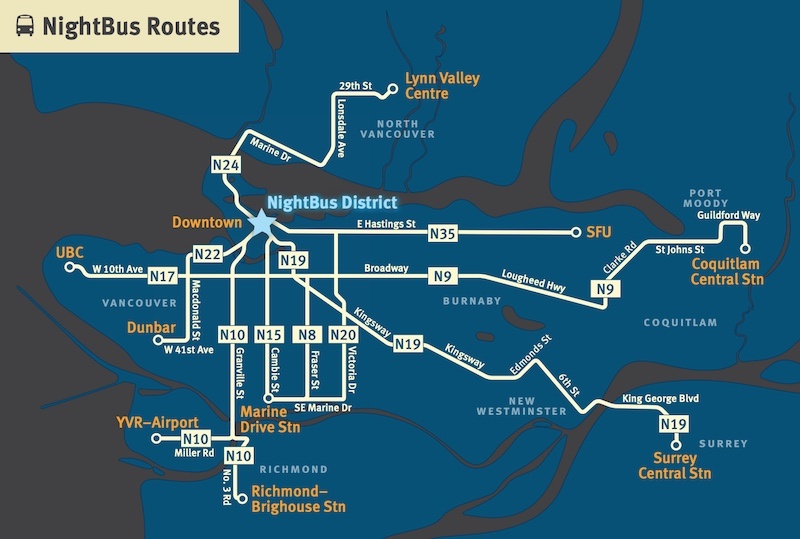