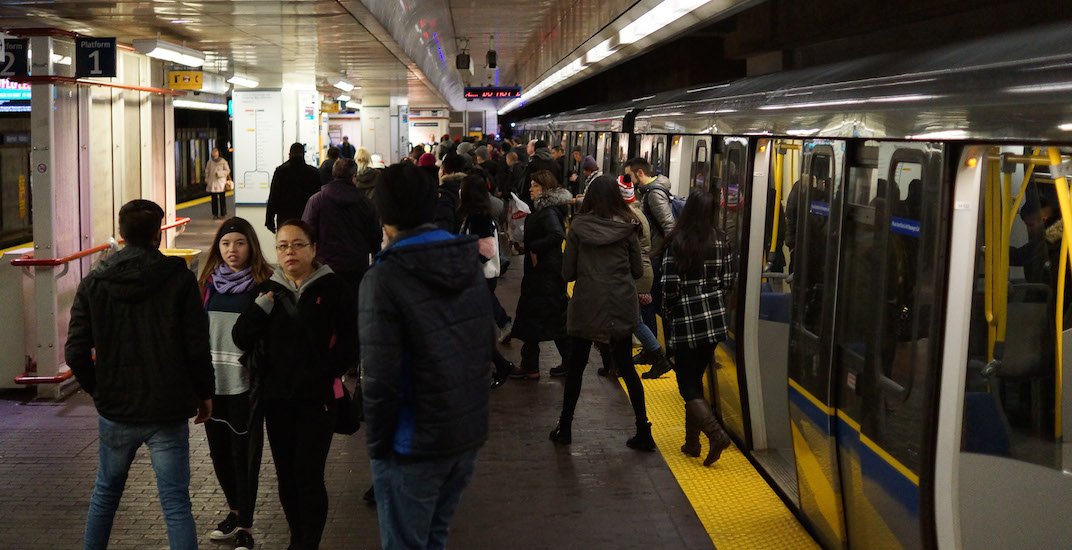 TransLink has confirmed that it is taking a closer look on what it will take to operate SkyTrain later at night, specifically on Fridays and Saturdays when there is a higher late night demand.

During a press conference at the Evergreen extension’s one-year anniversary last Friday, TransLink CEO Kevin Desmond said staff with SkyTrain are “going to look at a lot of different options.”

They are also seeking advice from other public transit operators around the world who run later-night or 24-hour transit service.

But only a small number of transit operators do extended overnight service, and this only includes a handful of the world’s busiest subway systems.

There is one exception for 24-hour train service on lines with just dual tracks: As featured in a recent Daily Hive in-depth article, the Copenhagen Metro is a similar-sized, driverless train system like SkyTrain, and it operates 24/7.

“I know she (Vivienne King. President & General Manager of TransLink’s BC Rapid Transit Company) is already reaching out worldwide to colleagues who have found ways to operate later at night, but we have to examine the tradeoffs and where those tradeoffs would fall,” said Desmond.

He said the maintenance window is currently longer on the weekends, with between 400 and 500 hours of maintenance performed overnight on Fridays and Saturdays each year.

In order to achieve longer late night service hours, SkyTrain staff would have to find a way to replace this maintenance period.

“If we can find a way to find the right balance point between serving customers in the later night, particularly on the weekends, while still maintaining the system in a state of good repair and providing productive maintenance windows for our maintenance crews, we have a commitment to do that. But that is not going to be easy to do and will take us a further while to study it,” continued Desmond.

Even if service were extended by just two hours – up to 3 am instead of the more ambitious 24-hours – on Fridays and Saturdays, the maintenance work being done during the truncated window before the start of service the next day “becomes much less productive”.

There has been a greater emphasis on the maintenance of SkyTrain, especially the 31-year-old Expo Line, ever since the major breakdowns of 2015.