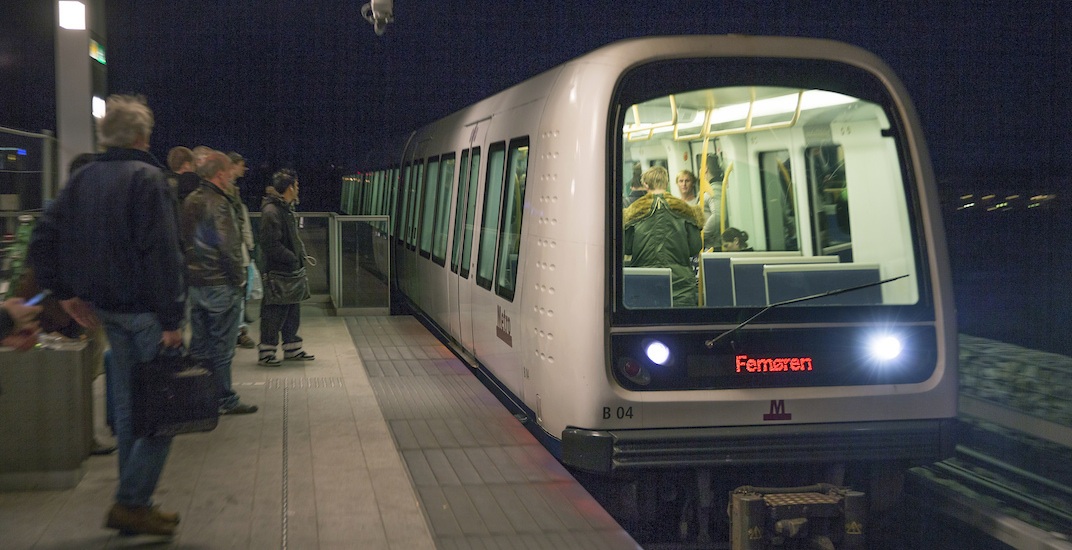 Around-the-clock train service is an exception, not the norm, on the world’s largest and busiest subway systems.

In fact, of the 10 major systems with the most ridership, only New York City’s subway has lines that operate 24 hours all seven days of the week.

The London Underground started 24-hour service on Fridays and Saturdays on some lines in 2016, and this so-called ‘Night Tube’ service has since been expanded to a few other major lines.

Other systems in cities like Tokyo, Paris, Hong Kong, and Moscow operate similar hours as SkyTrain from just after 5 am to roughly 1 am.

But major systems in Beijing, Shanghai, and Seoul close even earlier, with trains beginning at around 6 am and ending between 10 pm and midnight. 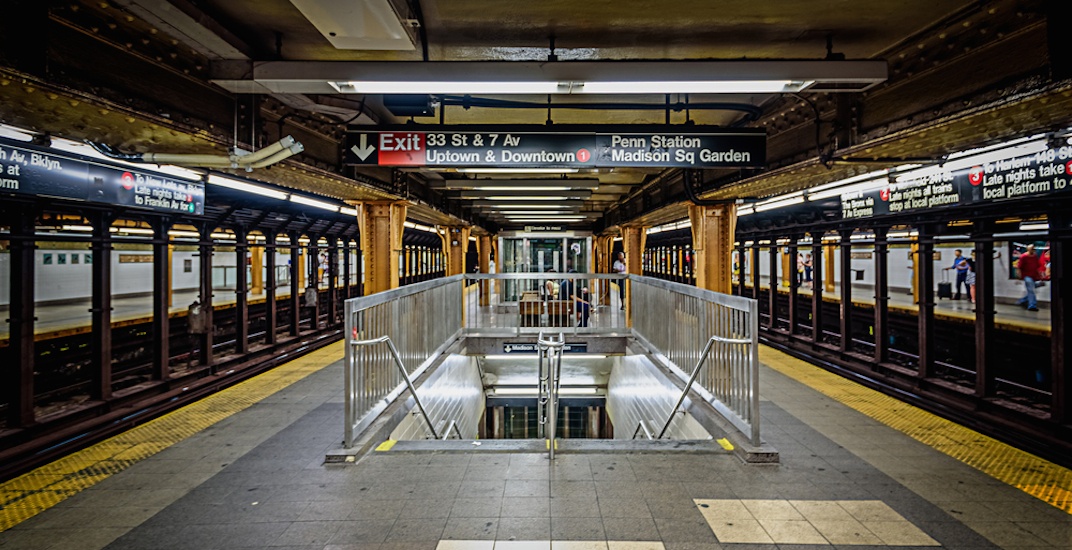 The need to use overnight shutdown hours for track maintenance and safety checks is often the stated reason that most systems do not operate later in the night, never mind 24 hours.

For years whenever the idea of later SkyTrain service was brought up, TransLink has said it is not possible largely due to much-needed scheduled maintenance, but there seems to have been a change of tune recently.

Last week, a senior official with TransLink suggested to CTV News that it is possible to keep trains running later in the night, and the comments have ignited a firestorm of calls from local business and elected leaders to extend train service hours at least on weekends.

The official said it would take “a significant amount of time, effort, planning and investment.”

How the Copenhagen Metro does 24/7

Some have quickly pointed to the Detroit People Mover’s extended Friday and Saturday hours, running slightly later than SkyTrain until 2 am.

But this example is folly; although this system uses the same driverless and linear induction motor technology that the Expo and Millennium lines operate on, it is a tiny 4.7-km-long system that only loops around the downtown Detroit area and has a ridership of just 6,000 per day. On Sundays, it begins service extremely late at noon.

One major common belief for later night or 24/7 train service is the need for duplicate sets of tracks on a line so that maintenance work and train service can alternate between tracks. The most cited example of such a multi-track configuration – more than two tracks – that allows for the ease of extended service hours is the New York City subway system. 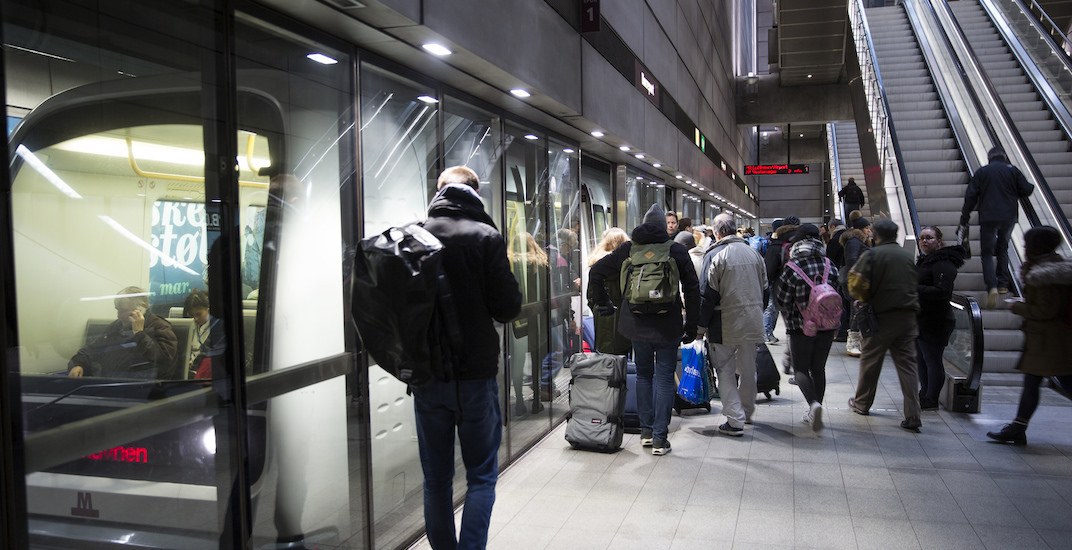 An underground station on the Copenhagen Metro. (Jenny Andersson / Flickr)

However, one mid-sized train system in Europe that is almost identical to SkyTrain has been running 24/7 train service for nearly nine years. And it only has two tracks – just like SkyTrain.

The Copenhagen Metro, which opened in 2002, is a fully grade-separated driverless metro system that runs a total length of about 20 km with 22 stations and uses 60-metre length platforms, in both underground and above-ground built forms. Each fully-articulated train is 39 metres long, with a carrying capacity of 300 passengers.

Serving the Copenhagen city centre, suburban areas, and the international airport, the Copenhagen Metro has a ridership of about 167,000 per day, based on 2016 statistics.

Comparatively, the Expo and Millennium lines have a combined 60 km of track and 38 stations with 80-metre length platforms. In 2016, it recorded an average of 316,000 riders per day.

The Canada Line perhaps resembles the Copenhagen Metro the most, given that it also uses conventional track technology, has a similar route length of 19 km with 16 stations, serves similar types of destinations and urban areas, and has a ridership of 138,700 per day, as of 2016. Its platform lengths vary between 40 and 50 metres, and trains are 40 metres long with a carrying capacity of 334 passengers each. 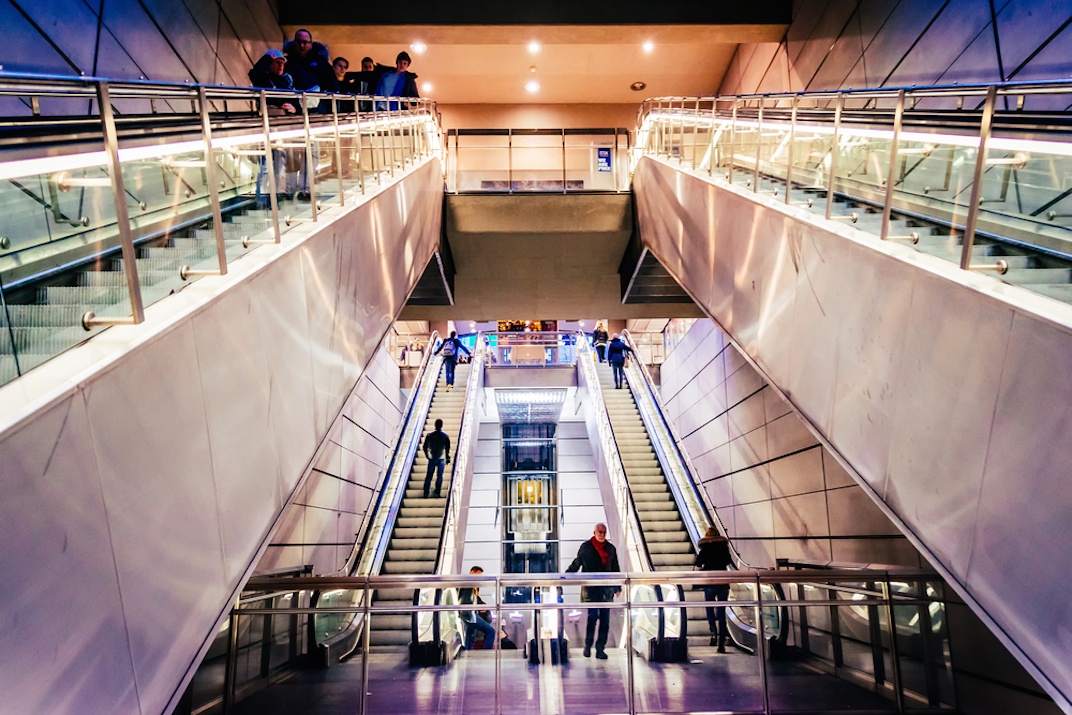 In March 2009, the Copenhagen Metro became the first driverless subway system with two tracks to operate 24/7. This happened after investments were made to alter the system as necessary, which mainly revolved around the installation of independent switch control on the entire system.

During the overnight hours, within a four-hour period, one track is shut down to allow maintenance work to be performed while train service is continued on the other track.

Trains operate every 20 minutes from Sunday to Thursday between midnight and 5 am, and every 15 minutes – with eight-minute frequencies on the merged mainline – during the busier Friday and Saturday nights between 1 am and 7 am.

But an extended maintenance period is required every eighth week, when overnight train service is replaced with buses from Sunday night to Thursday night.

“Planning all maintenance activities to take place within such a short timeframe during the night has been a huge, challenging effort and demanded/will demand professionalism and skill from maintenance and operational management, technical and control room staff not to mention service personnel,” reads a briefing by operators. 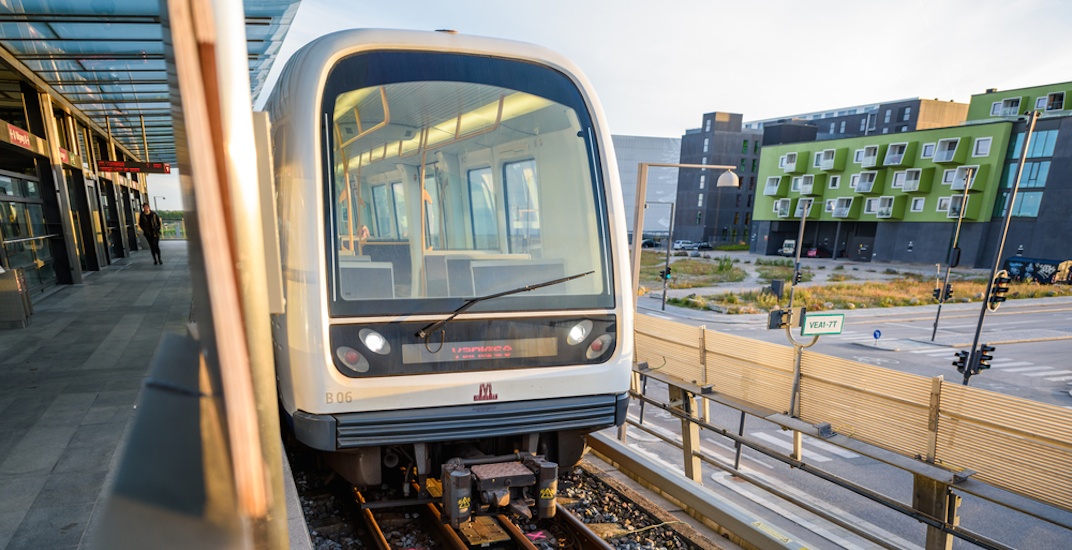 The front of a Copenhagen Metro train at an above-ground station. (Shutterstock)

Although SkyTrain and Copenhagen Metro both use automation, their operational staffing is immensely different.

The Copenhagen Metro has at least one attendant on board each train to attend to passengers and allow for an immediate reaction to any issues that may arise, including the need to manually drive a train.

It also has staff at each station, working in a station control room to monitor the platform area and platform edge screen doors.

But not all trains and stations on SkyTrain are monitored by attendants, as TransLink has opted to have roaming staff to keep labour costs low. The last time all stations were staffed was during the brief period last year when there were additional attendants to assist passengers with the transition to closed fare gates, but TransLink said this was highly costly and not feasible over the long run.

With far less foot traffic during the overnight hours, the need for higher staffing levels to ensure passenger safety and prevent vandalism and other criminal activity will likely be another major hurdle for the implementation of later night transit.

TransLink may be warming up to the idea

Over the last few days, there have been some internal conversations over how SkyTrain service could be extended later.

Charles Gauthier, president and CEO of the Downtown Vancouver Business Improvement Association, told Daily Hive there is new blood in TransLink leadership, as both CEO Kevin Desmond and SkyTrain general manager Vivian King are new to the team and bringing in new ideas.

“I think there is now some openness to that,” he said. “It sounds like there has been a change in the perspective and I think it’s a matter of exploring it with maybe brand new fresh eyes. We are encouraged by that, that they’re willing to look at it and prepared to sit down and talk about it.”

“I think at the end of the day it’s more of an issue of dollars and cents. It’s going to cost something to do it.” 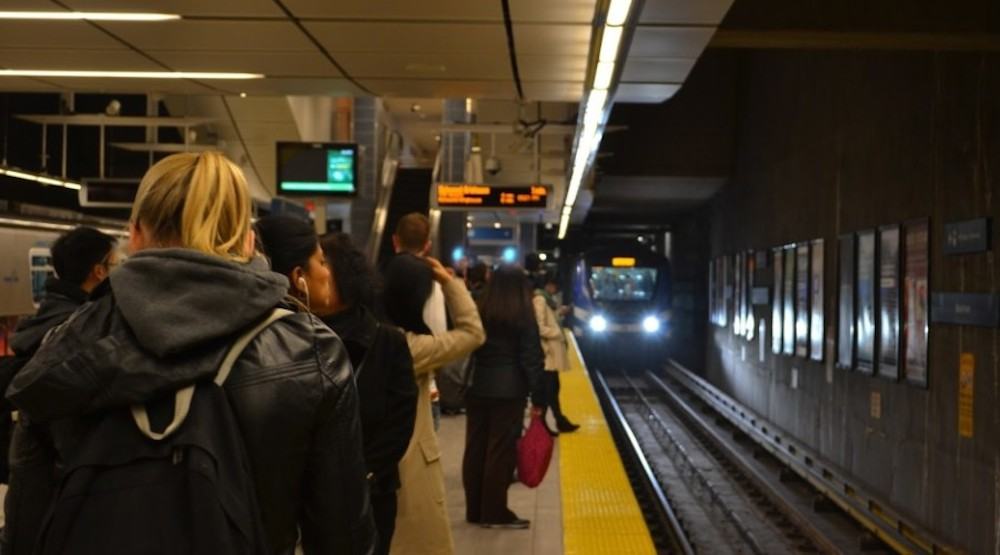 But Gauthier is not going as far to demand 24/7 service, and is instead suggesting longer Friday and Saturday hours – perhaps two additional hours, up until at least 3 am – as the first step. This would better coincide with the nightlife that happens in downtown, particularly the nightclubs and bars that are open until 3 am.

“Customers and patrons [of bars and nightclubs] feel that without any appropriate and sufficient taxi service and ride sharing services like Uber, they do not have a way to get people home safely,” he continued.

“I’d suspect it would also reduce the kind of situations we’re already seeing on the Granville Entertainment District where people get frustrated and angry and in some cases even get into fights over cabs. They are hospitalized as a result of it.”

He says the availability of late night transit is key for nightlife vitality, and it would grow the local economy and create new jobs.

A train waiting at the Expo Line platform at Waterfront Station. (GoToVan / Flickr)

For instance, ever since the London Underground started its 24-hour Night Tube service on weekends, 2,000 new permanent jobs – mainly in the hotel and restaurant industries – have been created and the city economy has been boosted by £360 million (CAD$609 million), according to the London Underground’s website.

“Now take into account that London is a much bigger city than Vancouver, but even if we could get a fraction of that number it would be quite significant,” continued Gauthier.

“It would be an economic boost to our economy and make us a city that people would want to come to and live in. It would be a great way to attract talent from around the world.”