The business case for the Fraser Highway SkyTrain extension project and the City of Surrey’s commitment to significantly densify the areas around the future stations are items up for discussion and approval in TransLink’s Mayors’ Council meeting this Thursday.

A public transit authority staff report indicates the business case for the $1.63-billion first stage extension of the Expo Line from King George Station to 166 Street in Fleetwood Town Centre — a distance of seven kms with four stations — will need to be approved by the Mayors’ Council before it can be sent to the provincial and federal governments for final approval.

TransLink is hoping approval from both senior governments will be received by the middle of the year, allowing the funds previously dedicated to the now-cancelled Surrey Newton-Guildford (SNG) LRT to be transferred to the SkyTrain extension.

Upon final approval, procurement will be conducted, taking about 18 months to complete, while construction, testing, and commissioning will require a further four years, bringing the extension’s opening to late 2025.

Unless an additional $1.5 billion is provided by senior governments, the remaining nine kms to Langley City Centre will have to be constructed in a second stage, but TransLink is aiming to construct the entire $3.1-billion, 16-km-long, eight-station project in a single stage given the cost efficiencies of doing so.

If the full funding requirement is provided within the year, the entire extension could be ready by 2025. TransLink is conducting planning and design work simultaneously on the second stage between 166 Street and Langley City Centre so that construction can begin as soon as funding is secured.

To further support the business case, the City of Surrey and TransLink will present the Surrey-Langley SkyTrain Supportive Policies Agreement to the provincial government, which promises transit-oriented densification around the station areas of the extension.

“The agreement provides assurance that SkyTrain-supportive land use will be advanced in the SLS corridor and includes commitments that go beyond those made in the previous agreement for the SNG LRT Project.”

The official community plan will be updated to designate transit-supportive densities in the city centre and along the Fraser Highway corridor, including specific policy statements that prioritize rapid transit corridors and urban centres as areas for higher density residential, commercial, and institutional development.

There will also need to be specific housing initiatives for non-market housing and the homeless. 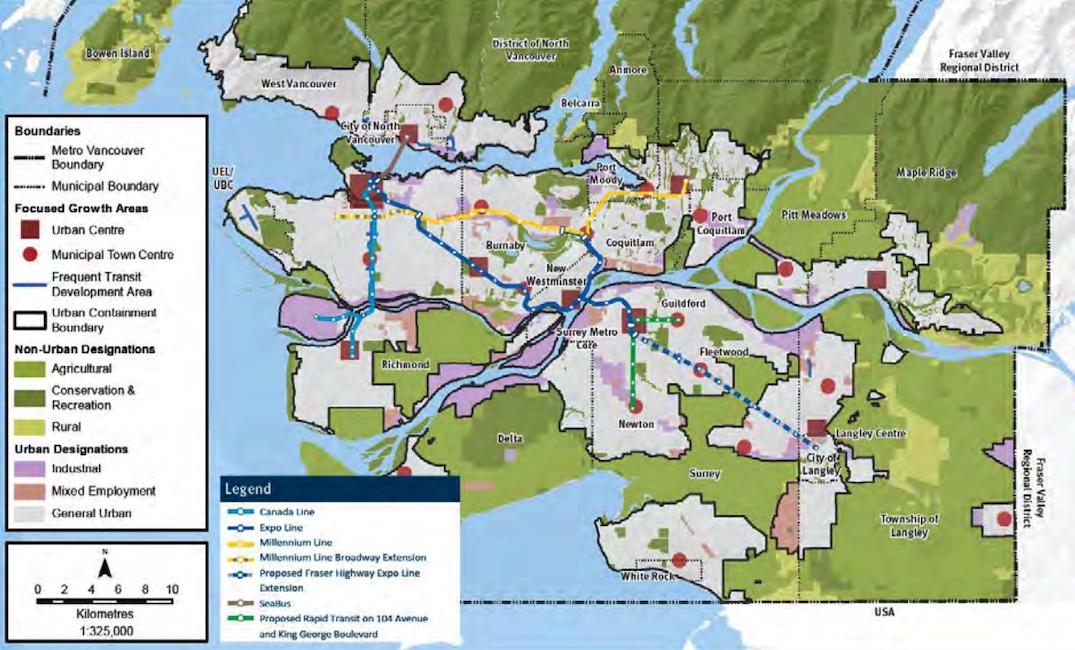 The report indicates the SkyTrain extension is a key tool to tap into more of the region’s housing supply, specifically in areas that offer some of Metro Vancouver’s most affordable housing. While housing costs are lower in Surrey and the surrounding municipalities, household transportation costs — largely reliant on an automobile — are above average as a result of a lack of options and long travel distances to reach jobs and services.

“The City will seek TransLink and the Province’s input as early as possible in the planning process on applications for developments in close proximity to SLS SkyTrain Stations to achieve the best possible land use, housing, transportation and design outcomes. The precise geographic limit will be agreed upon by the City and TransLink based on planning considerations such as transit passenger movements, other transportation mode needs and government owned lands,” continues the report.

“TransLink will provide input to the City on proposed developments in close proximity to SLS SkyTrain Stations to ensure the best possible land use, housing, transportation and design outcomes, allocating staff and in-kind resources consistent with the City’s development review schedules and sufficient for their desired level of involvement.”

Additionally, for implementation when the project is fully built, the City of Langley has reached a draft memorandum of understanding for a potential major operations and maintenance centre in its jurisdiction to accommodate the needs of the growing train fleet on both the Expo and Millennium lines. 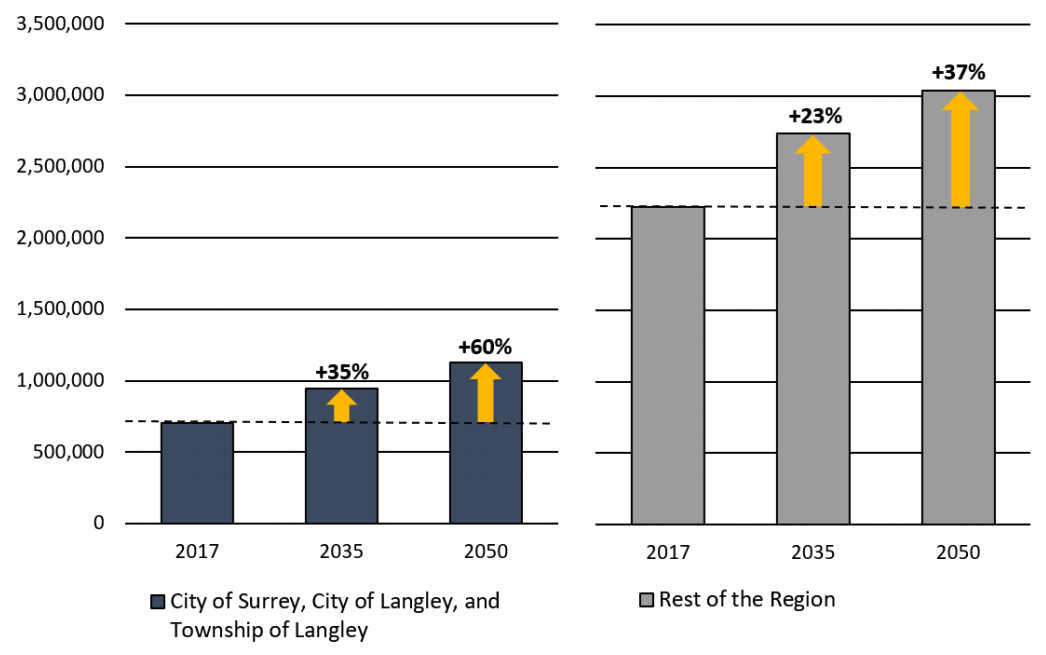 Metro Vancouver’s South of Fraser subregion is forecast to see 420,000 additional residents and 147,000 new jobs by 2050. For the SkyTrain extension corridor specifically, the population and employment growth figures are expected to rise by 49% and 38%, respectively, over the same timeframe, but these figures are deemed to be conservative as they do not account for the density changes from new and updated land use and community plans.

The choice of SkyTrain over BRT and LRT allows the project to better achieve its objectives of an optimal user experience — providing fast, frequent, reliable, and convenient service across the region, and increase access to employment, schools, housing, and services.

During the LRT planning process, there was an overwhelmingly singular focus on the local benefits of the street-level rail transit project, but the business case for the SkyTrain extension highlights the two-folded goal to “advance local and regional prosperity.”

The full extension is expected to see an average weekday ridership of 62,000 boardings by 2035, with 20,000 person-trips made by transit that would otherwise take place by car.

It will have a capacity to move 6,800 passengers per hour per direction (pphpd) — equivalent to over 10 times the capacity of bus services on Fraser Highway today or roughly the same current capacity of the Canada Line. As a seamless extension of the Expo Line, its ultimate capacity can grow to 25,000 pphpd to accommodate future ridership growth.

The benefit-cost ratio (BCR) of the full extension reaching Langley City Centre is 1.24, which is considered high as a BCR over 1.0 indicates the range of transit passenger, environmental, and wider economic benefits surpass the project costs over a 30-year period.

Comparatively, the BCR for the Canada Line was 1.25, and the Evergreen Extension was 1.27. The BCR for the proposed SFU Burnaby Mountain gondola is similarly high at 1.25. For further contrast, low BCR examples include the SNG LRT’s 0.70 and Toronto’s Ontario Line’s 0.76 to 0.88.