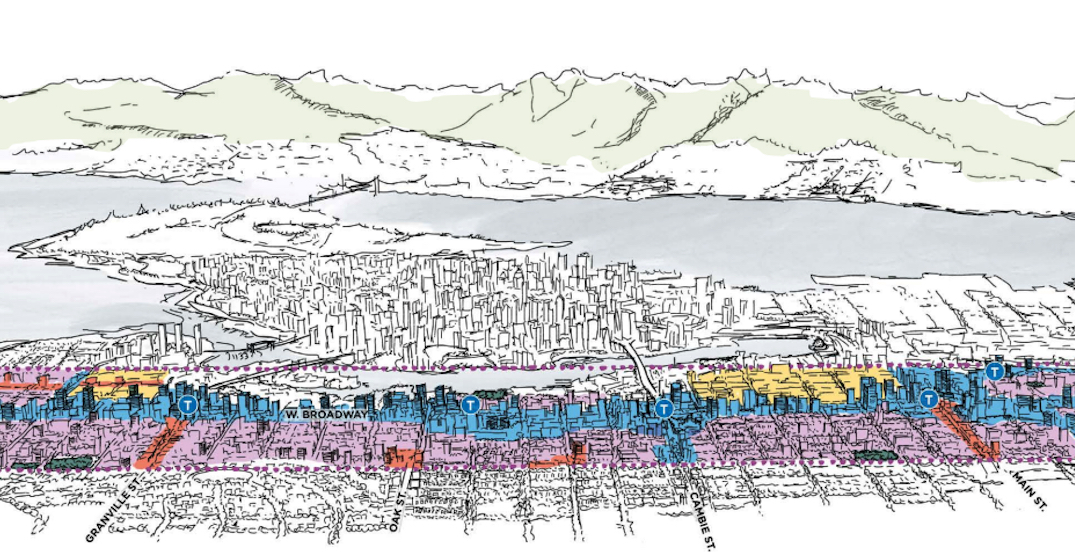 Proposed skyline within the Broadway Plan, November 2021. (City of Vancouver)

Vancouver will gain a well-defined secondary city skyline spanning the length of the Central Broadway corridor to support housing affordability and economic development growth in the region.

As of today, the second last round of public consultation is underway on the City of Vancouver’s Broadway Plan, which was catalyzed by the SkyTrain Millennium Line Broadway Extension project reaching Arbutus Street. In exchange for investments by the provincial and federal governments for the subway project, the City of Vancouver is required to provide new transit-oriented development opportunities near the stations.

The Broadway Plan spans the Central Broadway corridor, framed by Vine Street to the west, 1st Avenue to the north, Clark Drive to the east, and 16th Avenue to the south.

Broadway Plan areas, November 2021. Click on the image for an enlarged version. (City of Vancouver)

Proposed skyline within the Broadway Plan, November 2021. Click on the image for an enlarged version. (City of Vancouver)

The emerging direction of the densification strategy calls for increasing Central Broadway’s population by up to 50,000 to about 128,000 residents — an increase of 64% compared to 78,000 residents today. This would be achieved by growing the number of homes in the area from over 60,000 today to up to 90,000 units, with much of this is intended to be more affordable forms of housing.

Added office, retail, restaurant, institutional, and creative industrial spaces would grow the number of jobs from 84,400 today to up to about 126,000 jobs.

These residential and employment targets through redevelopment are for the next 30 years through 2050.

As can be expected, the new tallest building allowances will be in the “Centre” areas within the immediate area of the six new subway stations. Tower heights of generally between 30 and 40 storeys can be expected in the station areas, complete with a mix of uses including active retail and restaurant space frontage on the ground level, creating vibrant areas around the station entrances.

Shoulder areas next to the immediate area of the stations — generally within a two or three block radius — will see height allowances of 20 to 30 storeys, also with active commercial uses at street level. 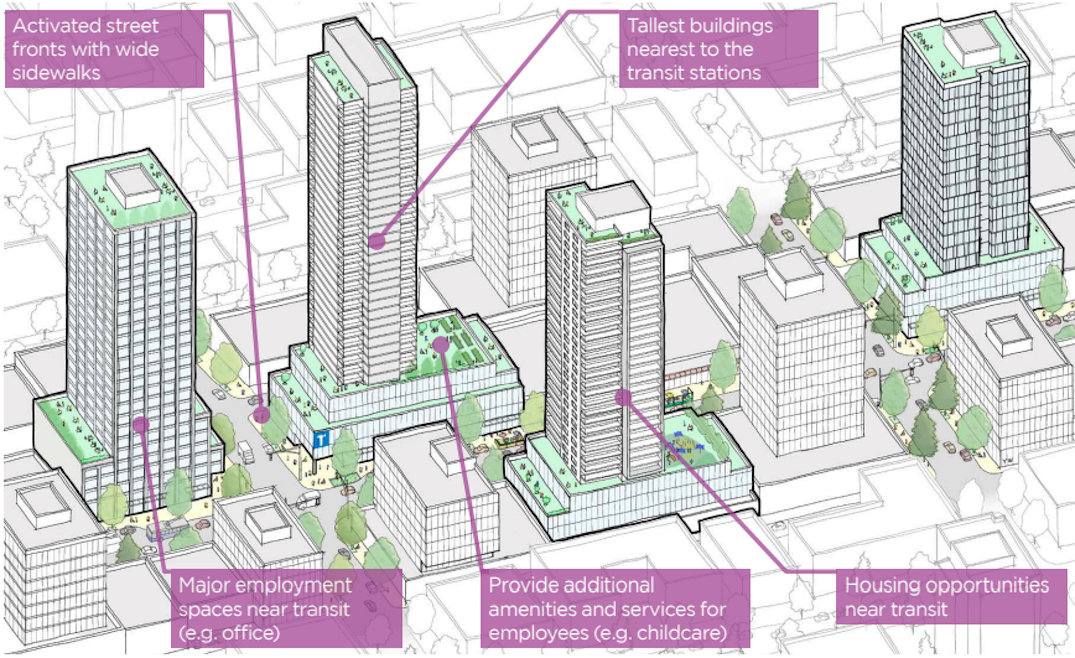 Example of a “Centre” area near the future South Granville Station in the Broadway Plan, November 2021. (City of Vancouver) 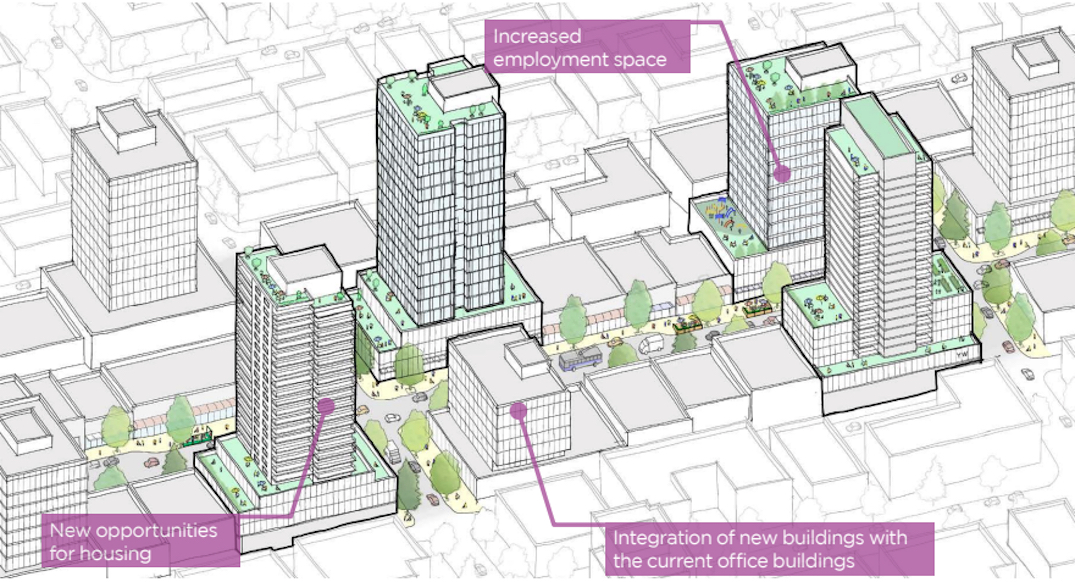 Example of “Shoulder” areas along Broadway in the Broadway Plan, November 2021. (City of Vancouver) 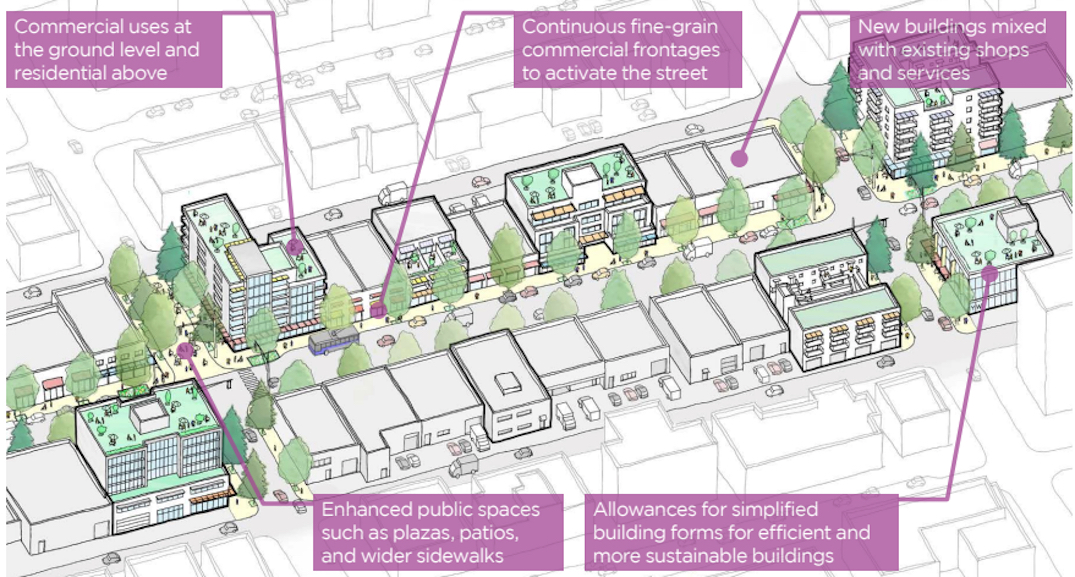 Example of “Villages” areas within the Broadway Plan, November 2021. (City of Vancouver)

Areas classified as “villages” include the retail strips of West 4th Avenue (within Kitsilano), Granville Street (south of 10th Avenue), and Main Street (south of 7th Avenue) within the corridor. These areas will see incremental changes with building heights of four to six storeys to reduce redevelopment pressures on existing businesses, with new developments required to provide replacement commercial uses on the ground level.

Outside of these areas, existing apartment zones would see new density and height allowances, potentially towers, for new additional purpose-built rental housing in a manner that replaces aging rental buildings and allows existing residents to remain in their neighbourhood.

Here are some major highlights for possible area specific allowances:

Uptown/Cambie North is served by the existing Olympic Village Station, and the future Oak-VGH and Broadway-City Hall stations, and the area is anchored by the Vancouver General Hospital health precinct and BC Cancer, which will expand over the long term. The municipal government also has plans to build a new city hall on the block it owns immediately south of the existing city hall, where the Broadway-City Hall entrance building is located. Office, hotel, and other commercial developments will be prioritized across Uptown/Cambie North, with relatively minimal residential development, apart from some considerations for rental housing in some areas.

Although Uptown/Cambie North would have city centre designation, it would have lower height limits of between six and about 15 storeys due to a combination of mountain height view cones and the hospital helipad’s flight path.

Existing industrial areas within the Central Broadway corridor are primarily located within Mount Pleasant. These areas would see intensified light/creative industrial and office uses, along with the introduction of retail/restaurant businesses and amenities to serve the growing number of workers in the area.

Proposed transportation network and public spaces within the Broadway Plan, November 2021. Click on the image for an enlarged version. (City of Vancouver) 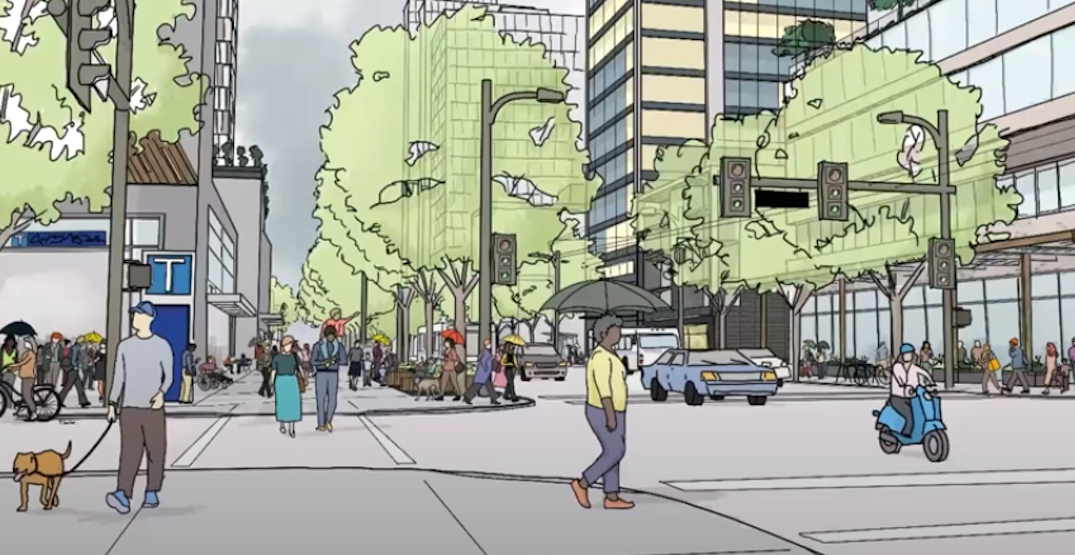 Example building forms next to a future SkyTrain station and a four-lane road configuration for Broadway, under the Broadway Plan, November 2021. (City of Vancouver)

The proposed directions for the Broadway Plan also calls for expanded and improved public parks and open spaces, community and recreational amenities, and improved walking and cycling infrastructure. This includes narrowing much of Broadway into four travel lanes (two lanes in each direction) to accommodate wider sidewalks, restaurant patios, and other public spaces for a more vibrant streetscape.

An online survey is available through November 30, 2021. Feedback will be used to create the final draft Broadway Plan, which will be reviewed in the final round of public consultation in the first quarter of 2022 before the plan is considered for approval by city council in the second quarter.

Construction on the subway began earlier this year, and it is slated to open in 2025. Upon opening, it is expected to see 130,000 boardings daily.