Part 3 discusses the forthcoming introduction of ridehailing to the region and the potential impact to transit ridership and road traffic.

During the ridehailing seminar at the Railvolution public transit conference held in Vancouver in September 2019, the common theme in the room with North American planners, city officials, and experts centred on the negative impact of app-based, for-hire transportation services and how they have led to a sizeable drop in transit ridership.

But TransLink CEO Kevin Desmond believes Metro Vancouver will be an outlier, just like Seattle where public transit ridership has grown in the backdrop of both ridehailing and major transit expansion projects.

The Seattle region, according to data analyzed by JLL Research in June 2019, had by far the highest transit ridership growth over a 10-year period amongst 25 of the most populated metropolitan areas in the United States. This happened in the backdrop of ridehailing, with Uber growing at an exponential rate in the years after its 2011 launch in the city.

One of the significant factors contributing to Seattle’s transit ridership growth centres on the densification of downtown Seattle’s office market, particularly with the growth of Amazon’s headquarters in South Lake Union.

Another major factor is the 2016 opening of the Link Light Rail’s 5-km-long University Link extension, which brought a subway to the major destinations of Capitol Hill and the University of Washington campus.

Within just two years, as a result of the University Link, overall ridership on the entire Link system grew by 66%.

While Seattle’s transit ridership growth slowed down in 2019, it is expected to pick up again over the coming years from continued transit expansion.

Approximately 54 kms of new Link rail track across five projects are currently under construction and set for an opening by 2024. And most of these new routes are grade separated, which brings higher speeds, allowing for the trains to deliver travel times that narrow the competitive gap held by automobiles, including ridehailing vehicles.

With all that said, Metro Vancouver is facing similar conditions.

Transit ridership in the Vancouver region over the last three years soared by a staggering 18%, while overcrowding increased by 36%.

There is currently over 4.5 million sq. ft. of office space under construction within the downtown Vancouver peninsula, with much of this new space driven by tech demand, especially Amazon.

With public transit, funding secured by the Mayors’ Council’s 10-year plan allowed TransLink to add hundreds of thousands of service hours over the last two years.

Service levels will see another surge in growth early next year with SkyTrain frequency increases on all three lines, especially on the Canada Line, and the introduction of three new express, high-frequency RapidBus routes from UBC to Joyce-Collingwood Station via 41st Avenue, Coquitlam Central Station to Maple Ridge via Lougheed Highway, and Park Royal to Phibbs Exchange on the North Shore.

At least two additional RapidBus routes are planned for 2021, serving routes from Richmond-Brighouse Station to Metrotown Station via Knight Street Bridge, and Scott Road Station to Newton Exchange via Scott Road and 72 Avenue.

And by 2025, there will be up to 22 kms of additional SkyTrain routing, with the opening of the Millennium Line Broadway Extension to Arbutus and the Expo Line Fraser Highway Extension possibly reaching all the way to Langley if additional funding is secured.

“I think we have a really good transit system that works well for us,” said Desmond, who also acknowledged the arrival of ridehailing will affect transit demand “to a degree.”

But he says the more important issue that he is concerned with is the extent of ridehailing’s impact on road traffic.

In the second quarter of 2018, Uber and Lyft provided over 91,000 rides combined on an average day in the Seattle region. Nearly 40,000 of these trips start in Seattle’s densest areas, where congestion is an issue, in downtown, Belltown, South Lake Union, and Capitol Hill.

In San Francisco, the results of a congestion study released this past spring determined congestion in the city increased by about 60% between 2010 and 2016, with Uber and Lyft deemed responsible for over half of this increase.

In October of this year, TransLink released a report that stated 80% of Metro Vancouver’s bus routes are experiencing greater delays on the road compared to five years ago — and this is without any ridehailing-induced congestion.

The public transit authority stated increased road congestion and a lack of bus priority measures have led to longer and less reliable travel times, longer waits and increased overcrowding from bus bunching, and higher operating costs. The report also gave urgency to the need to work with municipal governments to implement strategies that provide buses with better priority on their roads.

“That is going to slow buses down, it is going to slow other motorists, and it is going to clog up streets. Hopefully, as ridehailing rolls out, we’ll find the right balance point where it is providing a net mobility improvement to the region and does not materially undermine our fare revenues and it doesn’t slow down traffic.”

Where TransLink is hoping ridehailing will make an improvement in the region’s mobility is during the late-night and overnight periods, when there is far lower transit ridership to support a breadth of transit services at desirable frequencies.

The forthcoming introduction of ridehailing was deemed as a major consideration for TransLink’s decision to not proceed with extended SkyTrain hours on Fridays and Saturdays, along with reasons that include unfeasible logistical and financial hurdles. Data provided by Uber to TransLink shows the greatest demand for ridehailing services in Canadian cities is between 10 pm and 3 am.

“For example, ridehailing is made to serve late night needs on the Granville Entertainment District. We’ve seen stats from Uber and Lyft that their biggest business times of the week are Friday and Saturday nights, where we can’t really step in,” he continued.

“In my mind, if it is a net mobility gain, bring it on. It provides other ways for people to get around that we can’t do from transit that would otherwise be a net benefit for the general public.” 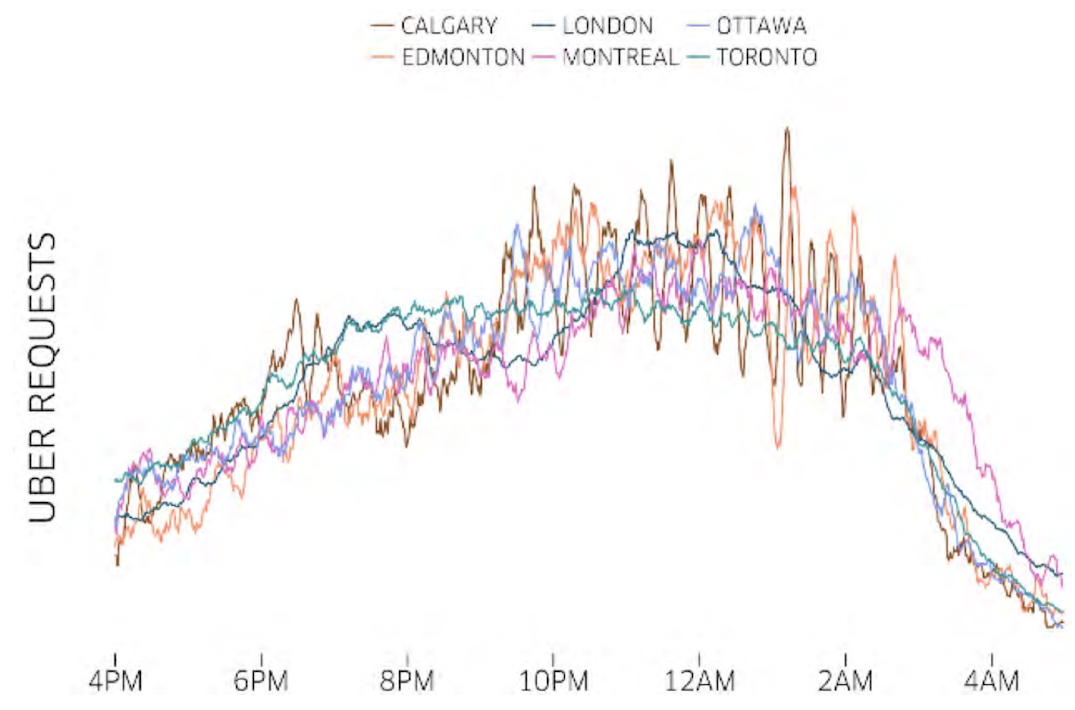