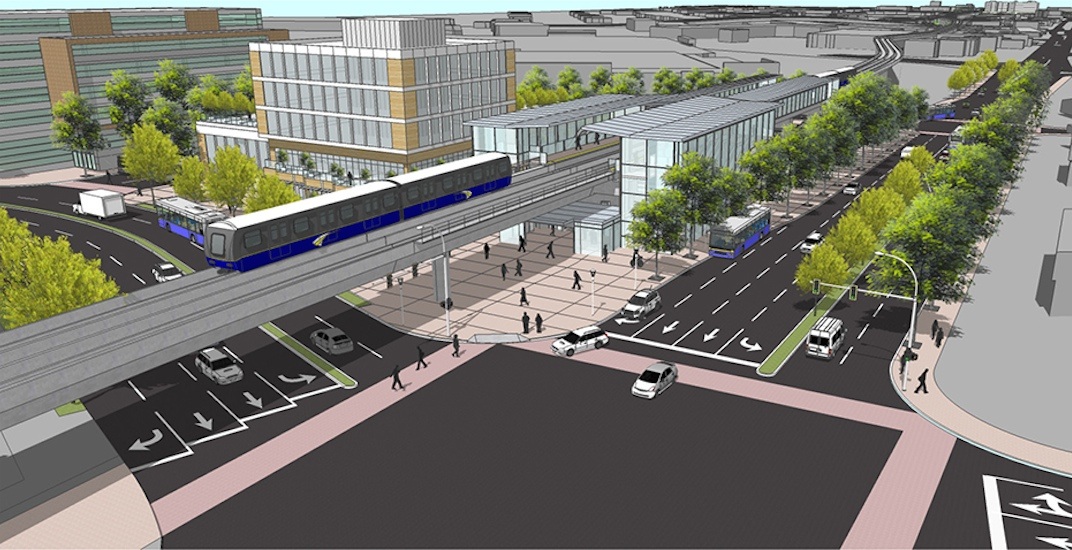 While it is not possible to build the remaining Millennium Line Broadway Extension from Arbutus Street to UBC as a continuation of the current project, significant planning and engineering work was already performed on a SkyTrain option on the Fraser Highway corridor prior to the City of Surrey and Mayors’ Council decision to axe the Surrey Newton-Guildford LRT.

In a project update in July, the public transit authority said the $1.6 billion in reallocated Mayors’ Council Phase Two funding from the cancelled LRT is sufficient to build half of the Fraser Highway extension — four new stations and seven km of new track reaching Fleetwood.

Securing the 10-year plan’s Phase Three funding is necessary to complete the remaining four new stations and nine kms of new track to Langley Centre, with about $1.5 billion in unsecured funding required specifically for this project. This outcome was expected regardless, given that any rapid transit project for the Fraser Highway corridor was originally slated to be covered by the yet-to-be funded Phase Three plan.

“If we can get the full funding and do this as a continuous project, it will be less expensive than doing it as two completely separate projects over the years, and you can get to Langley in the same period of time by 2025,” said Desmond today during an Urban Development Institute seminar.

He also noted that the benefit-cost analysis conducted also shows a first stage reaching Fleetwood as part of a multi-staged approach of reaching Langley Centre is “a good project” as well.

“SkyTrain to Langley is also going to be an excellent project… Without any new funding, we can get to Fleetwood as a start,” he said.

Desmond also offered a cautionary tale about the long-term consequences of the decisions that are made right now about how rapid transit projects are considered and designed in the region: learn from the mistakes of the Canada Line, and plan ahead for future needs.

“[The Canada Line] tells the tale of a region that was thinking small — a region that was kind of thinking, ‘Do we really need that? Maybe we should do surface or bus rapid transit. It’s not going to be a success,'” he said.

“Well, 10 years later, it has been just astonishing with what has happened along the Canada Line. Not only was it a great project, not only did it help drive a lot of the new development and housing and economic development in the region, if anything it was under-built. If any of you use the Canada Line frequently, you know it’s under-built. The stations were too small… We really have to think much bigger from a 30 to 50 year time horizon, and I hope that will help propel the current plan, the Mayors’ Council’s plan moving forward, and as we talk about our next 30 years.”

Desmond continued: “It gives you a sense that if you build it, they really will come. And I think that’s another reason why the Fraser Highway Line is just going to be a huge success.”