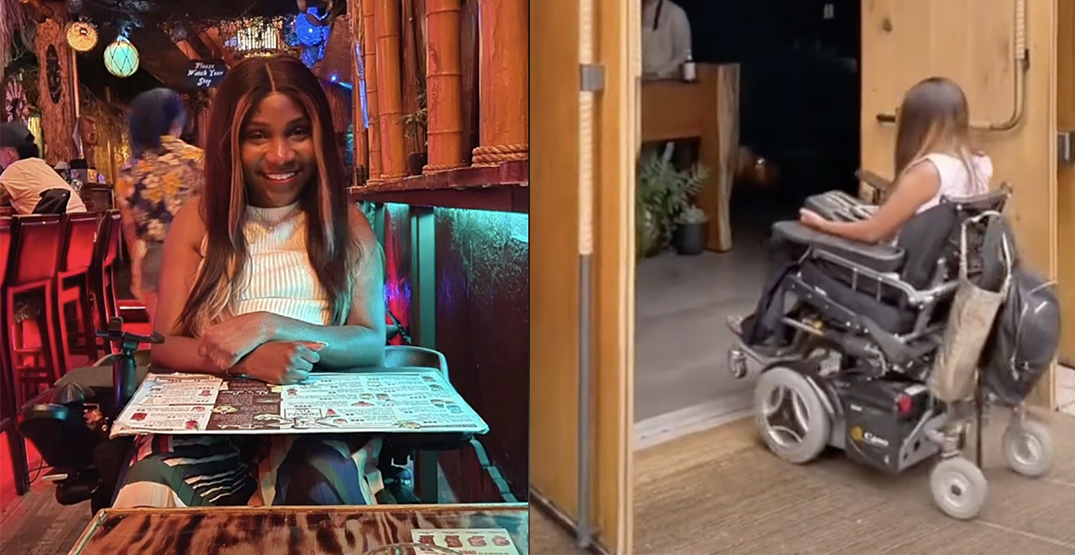 Taylor Lindsay-Noel started her TikTok account with the hopes of being a helpful resource for Canadians with accessibility needs.

Little did she know that her “Access by Tay” accessibility reviews would go viral.

“It’s not just people in wheelchairs who could use the information, it’s companions, it’s an elderly person or someone’s grandma… there are so many people who have accessibility needs,” the Toronto-based content creator told Daily Hive. “And it’s also a way to get me out of the house, so it’s kind of like a win-win.”

So, what exactly are these “Access by Tay” reviews?

The idea was sparked when her friend got engaged and started looking into wedding venues. Lindsay-Noel, a quadriplegic who uses a power wheelchair, is part of the bridal party, so her friend kept her in mind during the search.

Lindsay-Noel says her friend would show up to venues that stated they were accessible online, only to find the opposite in person. The bride-to-be encouraged Lindsay-Noel to document the good and bad experiences at different establishments as someone who uses a wheelchair.

In early June, Lindsay-Noel posted a TikTok review of Toronto restaurant The Shameful Tiki Room that racked up over one million views.

She says she looks for the following key characteristics when doing these reviews:

“Come have a horrible experience at The Shameful Tiki Room with me for my friend’s birthday,” she says in the TikTok.

In the video, Lindsay-Noel makes it very clear that she did her due diligence by checking the restaurant’s Yelp page, which stated that it was wheelchair accessible. She also called to double-check and they confirmed.

So, Lindsay-Noel was disappointed to find that the restaurant was not wheelchair friendly at all. The first red flag? No button to open the door at the entrance. And it went downhill from there.

She details in the video that moving around was difficult in the crowded space and that there was a step leading up to the washroom, which immediately made it inaccessible to her. To top it off, there were only two small washroom stalls.

“To get there and not be able to use the washroom was entirely enough of a reason for me to have to leave because I actually had to go as soon as I got there,” she explained. “And the staff were just not nice at all.”

The review got thousands of comments, many blasting the restaurant for its false advertising and inaccessibility.

“Will not be going there. If you have a restaurant that claims to be accessible, MAKE IT ACCESSIBLE !!!!!” one user commented.

In a follow-up TikTok, Lindsay-Noel shared that The Shameful Tiki Room did reach out with an apology.

“[The owner] did apologize for my experiences and said that they would be looking into ways to make their place more accessible. They weren’t super specific,” said Lindsay-Noel.

She stresses that her goal is “not to put anyone on blast” with these reviews.

“But if you say you’re accessible, and I show up, and I have to leave, that is worth me mentioning so someone else doesn’t experience this,” she added.

“I think that’s like the best I can ask for at least initially, is to just make sure people have accurate information, so they don’t show up somewhere and have the same issues I do.”

Of course, not all of Lindsay-Noel’s experiences have been terrible. She gave Toronto restaurants Casa Madera, STK Steakhouse, and Joey rave reviews.

She cited accessible buttons at front doors and bathrooms and friendly staff as reasons for their high ratings.

“For instance, at Casa Madera, they changed the orientation of the table that we were sitting at, so it would be a more comfortable fit for me,” said Lindsay-Noel. “When you have people who are genuine and willing to help, it makes the experience 10 times better.”

According to Statistics Canada, more than 6.2 million Canadians aged 15 years and older live with some form of disability that affects their level of freedom, independence, or quality of life.

So, it’s no surprise that the reactions to Lindsay-Noel’s reviews have been positive.

“I think seeing content that they can relate to, and also used as a source for accurate information has really connected with people,” she said.

Her “Access by Tay” reviews aren’t limited to restaurants. She has also expanded to reviewing other businesses, venues, and even events.

Most recently, she did a review of a Candlelight Concert at Longboat Hall in Toronto.

She hopes to do reviews of large-scale events, like the Toronto International Film Festival, and travel reviews, especially accessibility at airports and airlines.

While she can’t cover every business or event in Canada, she advises those who live with a disability to check Open Table, Yelp, and the company’s website to see if it’s accessible.