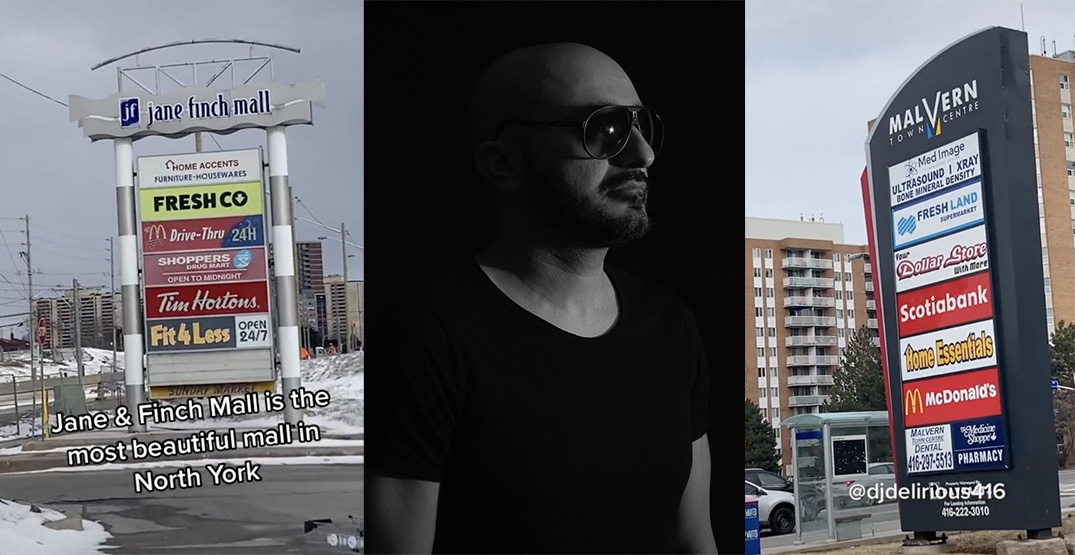 No, the Eaton Centre isn’t the only mall in Toronto.

The downtown mainstay may be popular among tourists, university students and office workers, but those born and raised in Toronto know the real gems of the city aren’t found near the CN Tower.

One Torontonian has taken on the task of showcasing the city’s local malls that are rarely in the spotlight. You may have seen, or even shared, his viral TikToks gassing up Malvern Town Centre or Jane and Finch Mall.

“Jane and Finch Mall is the most beautiful mall in North York,” he says. “Need to update your style? They gotchu. Forget Adidas; they have pants with four stripes.”

The man behind these hilarious videos is Hrant Manoukian. Born and raised in Toronto, the DJ and producer began making TikToks after his friend encouraged him to use his comedic chops on the social media app.

“It’s nice to kind of know your city and learn about these other malls that I never even knew existed, so it’s kind of cool,” he told Daily Hive.

The idea for the niche mall content was sparked by a visit to Agincourt Mall in Scarborough. The TikToker noticed most of the stores that used to be there had disappeared.

So, he hit record and started grabbing footage of funny and interesting things he noticed. While Agincourt Mall has its own TikTok now, it wasn’t his first mall tour because he had forgotten to get an exterior shot — an important aspect of his video template that introduces the viewer to “one of the most beautiful malls.”

Manoukian’s first official tour was of Sheridan Mall in North York. He noticed that many businesses in this mall were also shut down, an unfortunate pattern created by the pandemic.

Instead of highlighting what Sheridan was lacking, he decided to focus on the positive with his lighthearted voice-over.

“I don’t want to be negative,” Manoukian explained. “If you notice on all my videos, everything is positive… I put a positive twist on even though I might show some stuff that might look a little different than what I’m saying.”

A great example of this is footage showing shutdown stores and spaces for lease.

“The minimalistic decor gives it a vibe,” he narrates.

His TikTok tour of Jane and Finch Mall really put him on the map after popular Toronto Instagram account 6ixBuzz shared it to their feed.

“At that point, everybody wanted me to do a million malls, so I guess that’s what I’m going to do now,” said Manoukian.

The content creator is slowly but surely making his way to that million, having profiled 16 malls and plazas so far.

When Manoukian isn’t reviewing local malls, he’s DJing or producing remixes for the likes of Pitbull, Justin Bieber, Sean Paul and Dua Lipa. He says these mall videos are an extension of his job as a DJ, which is to try to make people happy.

“People have told me that they just wait for my videos every morning,” he said. “I’m enjoying making people laugh and putting a smile on people’s faces.”

So, why do Torontonians love these mall TikToks so much? Manoukian says it’s the nostalgia. Because he’s hitting the smaller, lesser-known malls, he says many watching his videos probably haven’t been to those places in ages, so it’s interesting to see what has changed.

His favourite malls (none of which he’s posted a TikTok about yet) are Yorkdale, Parkway Mall, Fairview Mall and Scarborough Town Centre, mostly for the memories they hold.

“I remember at Yorkdale…I would go to the arcade. They had a PJ’s Pet Centre there; I bought my first hamster there,” Manoukian recalled.

While fans get to scratch their itch for nostalgia, the malls get some free publicity too. Manoukian says a lot of malls have reached out to him to feature them in his viral videos.

“Have you seen the gas prices?” he joked.

The DJ reiterated that he’s doing this for fun in his spare time, but he’d be open to any opportunity that presents itself. Manoukian says his fans have been pitching a TV show based on his mall tours.

For now, you can continue tuning into his TikTok account. Maybe your favourite mall will be featured next!