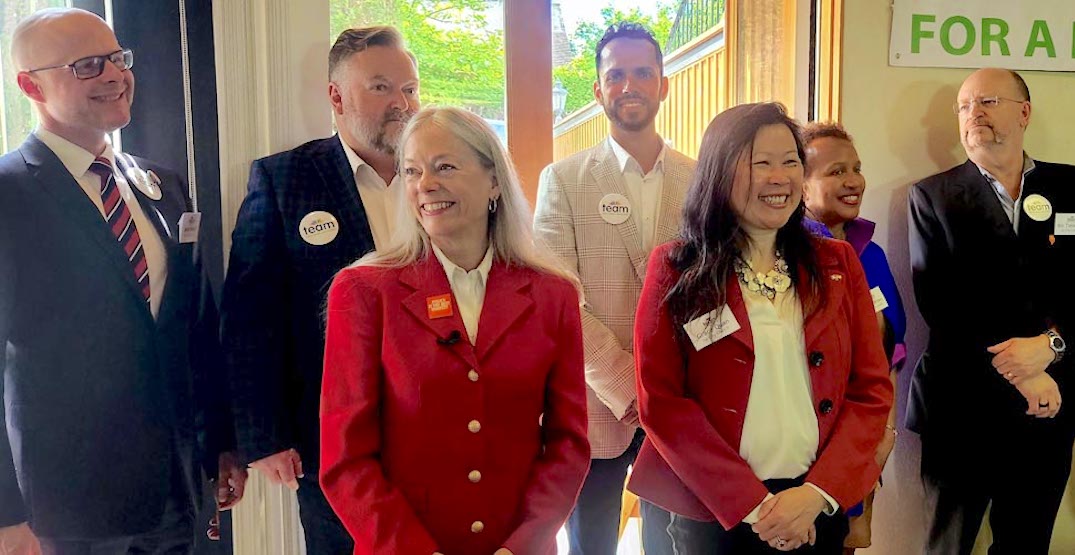 Colleen Hardwick and the TEAM candidates for Vancouver City Council, 2022. (TEAM for a Livable Vancouver)

The party held its nominations meeting this past weekend. Earlier this year, Hardwick, a sitting city councillor, was named as the party’s candidate for mayor.

“Every one of these talented people has an extensive background that will be valuable in helping reset our city,” said Hardwick.

The provided backgrounder of the candidates suggests TEAM will strongly focus on housing, specifically in the context of residents living near building development proposal sites who feel they have not been heard by the city or are concerned by the pace of overall change in the city.

TEAM’s candidates for City Council include Stephen Roberts, who was previously the chair of the board of the Vancouver Hospice Society. In 2019, the organization fought against a proposed townhouse development adjacent to their hospice facility on Granville Street in Shaughnessy.

“The experience prompted him to join TEAM’s campaign to return governance of Vancouver to the service of its residents,” reads the backgrounder on Roberts, who has experience in international banking.

The party has enlisted Sean Nardi, a Fairview resident and a member of the Fairview/South Granville Action Committee, which has been highly critical of the city’s Broadway Plan. His background is in information technology and financial services.

Cleta Brown holds a Master of Laws from the London School of Economics and has worked as an investigator and general counsel for the Ombudsman of BC, as a Crown prosecutor in the Provincial Courts, and on the Review Board of BC. She has worked with women and their children fleeing domestic violence, and served on many boards, including YWCA and University Women’s Club. Brown previously ran for city council in 2014 under the Green Party.

Grace Quan is a co-founder and the head of Hydrogen In Motion, which specializes in developing a nanomaterial to store hydrogen. She previously worked for the Canadian International Development Agency and in the Foreign Service and served as a senior advisor to the CFO of the Treasury Board of Canada.

TEAM has also nominated veteran communications and political strategist Bill Tieleman, who played key roles in the various movements against proportional representation in BC’s electoral system and the Harmonized Sales Tax. In the 1990s, he served as the communications director for BC NDP Premier Glen Clark and the BC Federation of Labour.

“He’s running for TEAM because he says it’s the only party that doesn’t want enormous towers all over the city and prioritizes affordable housing, public safety, city services, and livability,” states Tieleman’s backgrounder.

According to TEAM’s website, its preliminary detailed campaign platform — the first to be unveiled of any major party — aims to address a feeling of a disconnect in the city today, and the livability decline for more than a decade.

When it comes to housing, the party wants to use neighbourhood planning and “accurate population growth data” to identify the city’s future housing supply and tenure needs. It states its strategy of ending spot rezonings will slow down inflating home prices and stabilize land values.

New housing will be “planned in partnership with local residents at the scale of each neighbourhood” and to ensure infrastructure and community amenities keep up with population growth. During her term to date as a City councillor, Hardwick has been particularly outspoken against the city’s 10-year Housing Vancouver targets, and the municipal government’s dependence on development-driven revenues to fund infrastructure and community amenities.

For parks and recreation, TEAM’s platform states it will expand and improve the maintenance and sanitation of parks and beaches, enforce bylaws, and increase the number of park rangers and lifeguards.

It is supportive of the expansion of frequent bus service on arterial streets but is skeptical about the need for TransLink’s proposed Millennium Line extension from Arbutus Street to the UBC campus. It is promising to hold a “city-wide consultation” on the UBC SkyTrain extension that compares it with other alternatives.

As for how the municipality operates internally and governs itself, TEAM will “ensure residents and businesses are getting the value they deserve from their municipal tax dollars,” and will “limit tax increases to what is necessary to maintain services at levels agreed to with the community.”

There will be an emphasis to have the municipal government focus on its core mandate of providing basic programs and services “in the most efficient and effective way possible before carefully considering the provision of services outside its mandate.” Improved efficiencies will also be achieved by utilizing the newly created Vancouver Auditor General’s office.