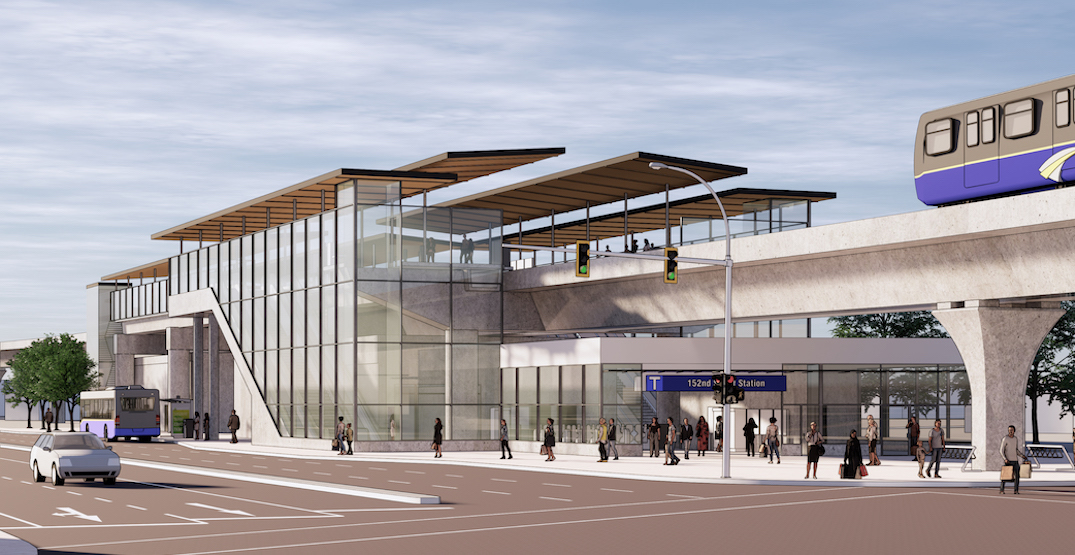 Residents and workers in the South of Fraser will have to wait a few years longer for the Surrey-Langley SkyTrain.

The opening of the 16-km-long Expo Line Extension along Fraser Highway from King George Station in Surrey City Centre to Langley Centre is now expected in 2028, according to a new TransLink board of directors report for this week’s public meeting.

As recently as early last year, prior to the pandemic, TransLink previously stated the first seven km reaching 166 Street in Fleetwood, using $1.6 billion in cancelled LRT funding, could reach completion in 2025. If approvals and additional funding were secured in time, it was also stated a 2025 opening would be feasible for the entire extension, beyond Fleetwood to Langley Centre.

But any 2025 opening was based on a business case approval by Summer 2020, and the start of the procurement process for a contractor in early 2021. Neither of these milestones — timed towards a construction start by early 2022 — were reached.

During the Fall 2020 provincial election, the BC NDP’s election platform committed to expediting the entire extension to Langley Centre in a single phase, with the BC Ministry of Transportation and Infrastructure taking over jurisdiction of the project’s planning and execution from TransLink. This transition of the project to the provincial government’s jurisdiction is now slated to reach completion in Fall 2021.

On July 9, 2021, just weeks before the federal election was called, Prime Minister Justin Trudeau announced $1.3 billion in federal funding towards the entire $3.95-billion cost of the extension — up from the previous estimate of $3.1 billion as recently as 2019. The remaining $2.65 billion would be committed by the provincial government and TransLink.

But it now appears this federal funding commitment has yet to be formalized. In a letter on September 15, 2021, Jonathan Coté, the chair of TransLink’s Mayors’ Council and the mayor of New Westminster, urged the political parties and candidates to “complete the federal funding agreement for the Surrey-Langley SkyTrain… so the project remains on schedule and avoid further costly delays.”

The construction cost escalation can likely be at least partially attributed to the delay in starting and completing work on the extension.

In July, the provincial government also stated a new business case is required to incorporate “the full scope of this major project that will take it all the way to Langley,” adding more time-intensive steps before procurement can begin.

The new report also suggests the fifth operations and maintenance centre (OMC) planned for Langley as part of the extension is a critical component for the train car storage needs of the regional SkyTrain car fleet.

By 2028, the Expo and Millennium lines will grow to a combined fleet size of 427 cars, including 30 additional cars to serve the Surrey-Langley Extension. But this is more than the 380 total available spaces in the four existing and planned OMCs in the region. This entails the expansion of three existing OMC facilities, and the new additional fourth OMC on a 28-acre site in Coquitlam near Braid Station, which will have a storage capacity of about 145 cars.

Construction on the $237-million fourth OMC begins in October 2022 for an opening in 2026, just in time for the bulk of the arrival of TransLink’s $723 million order of 205 new SkyTrain cars from Alstom/Bombardier. These new 41 five-car trains will add general capacity to the Expo and Millennium lines, serve the Millennium Line Broadway Extension, and replace all of the aging Mark I cars from the 1980s and early 1990s.

TransLink indicates by late 2028, there will be a combined 235 cars on the Expo Line, and 192 cars on the Millennium Line.

The fifth OMC in Langley is also a necessary component for the Surrey-Langley Extension, as “the length of the extension makes it challenging to stabling vehicles and maintenance equipment from existing OMCs.” There are no other OMC facilities south of the Fraser River; trains would have to travel about 30 minutes to the nearest suitable OMC facility, and even longer for maintenance crews as their on-track service vehicles travel at slower speeds.

The Surrey-Langley Extension will increase the size of the Expo Line and Millennium Line network by 24% — growing from 66 km to 82 km — and increase the number of cars by 8%.

The entire extension adds eight new stations to the network. Upon opening, the extension will have an initial capacity for 6,800 passengers per hour per direction, with ample room for long-term increases as demand grows. This capacity will be more than 10 times more than the existing bus services along the Fraser Highway corridor.

This new segment of the Expo Line is expected to have a travel time of about 22 minutes, which is over 25 minutes faster than existing buses. On a transfer-less, one-train Expo Line ride from Waterfront Station, it will take about 50 minutes to reach 166 Street Station in Fleetwood and about one hour to reach the new terminus at 203 Street in Langley Centre.

Although the Surrey-Langley Extension is now delayed, the Millennium Line Broadway Extension reaching Arbutus is on target to open in 2025. Major construction on the subway began this past spring.