For its third phase of public consultation on the Surrey-Langley SkyTrain project, TransLink is seeking public feedback on the designs of the new stations that will be built along Fraser Highway for the Expo Line Extension reaching Fleetwood.

In a technical briefing held for media today, Jeffrey Busby, the director of the Surrey-Langley SkyTrain Project for TransLink, said the project will be built in two stages based on the availability of funding, with the first $1.63-billion stage reaching 166 Street in Fleetwood and the future second $1.5-billion stage reaching Langley Centre.

Currently, there is only sufficient funding to reach Fleetwood, which still depends on a business case approval from senior governments for the reallocation of funding from the cancelled Surrey Newton-Guildford LRT.

There will be four stations along the seven-km-long extension reaching Fleetwood, specifically at 140 Street, 152 Street, 160 Street, and 166 Street.

The stations serve areas with major destinations, north-south bus routes, and major high-density redevelopment potential, which will be outlined by the City of Surrey’s new community plans around each of the stations.

Public washrooms could be incorporated at key stations, and public art will acknowledge the unique attributes of the station locations. A total of 300 park-and-ride vehicle stalls will be built for the stations of the first stage.

Here is a breakdown of the proposed station designs:

140 Street Station will be constructed on the east side of the intersection of Fraser Highway and 140 Street, with the structure built on the roadway’s median.

The station’s configuration is similar to Brentwood Town Centre Station, with a mezzanine pedestrian overpass spanning Fraser Highway below the platform level. It reduces the need to have a greater footprint within Green Timbers Urban Forest.

This side-platform station — just beyond the eastern edge of Surrey City Centre — serves nearby destinations such as Jim Pattison Outpatient Care and Surgery Centre, and the RCMP E Division Headquarters. It is also within short walking distance to the Surrey Memorial Hospital campus. 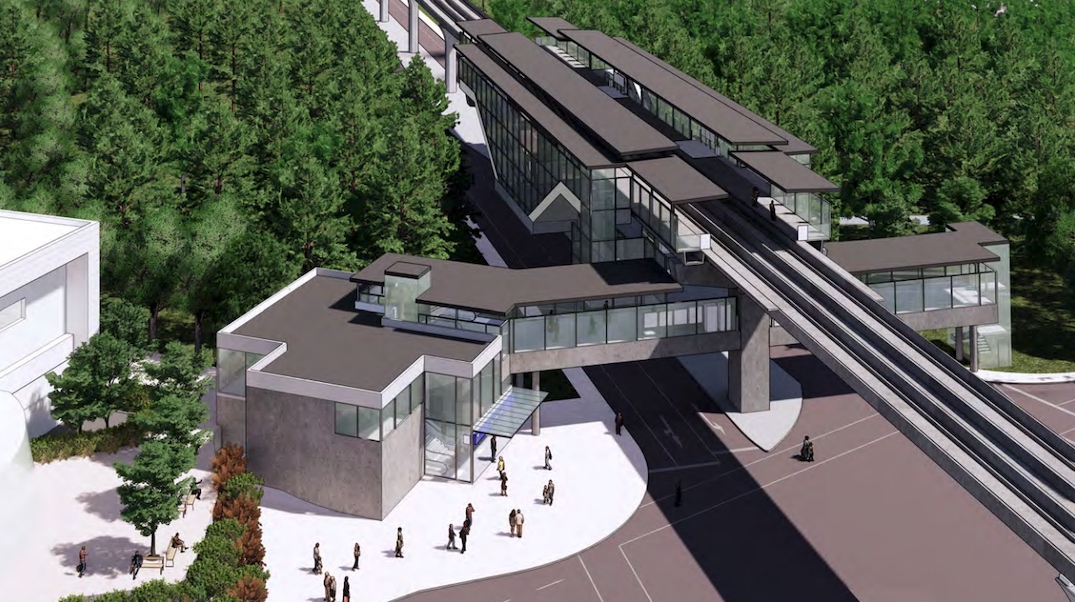 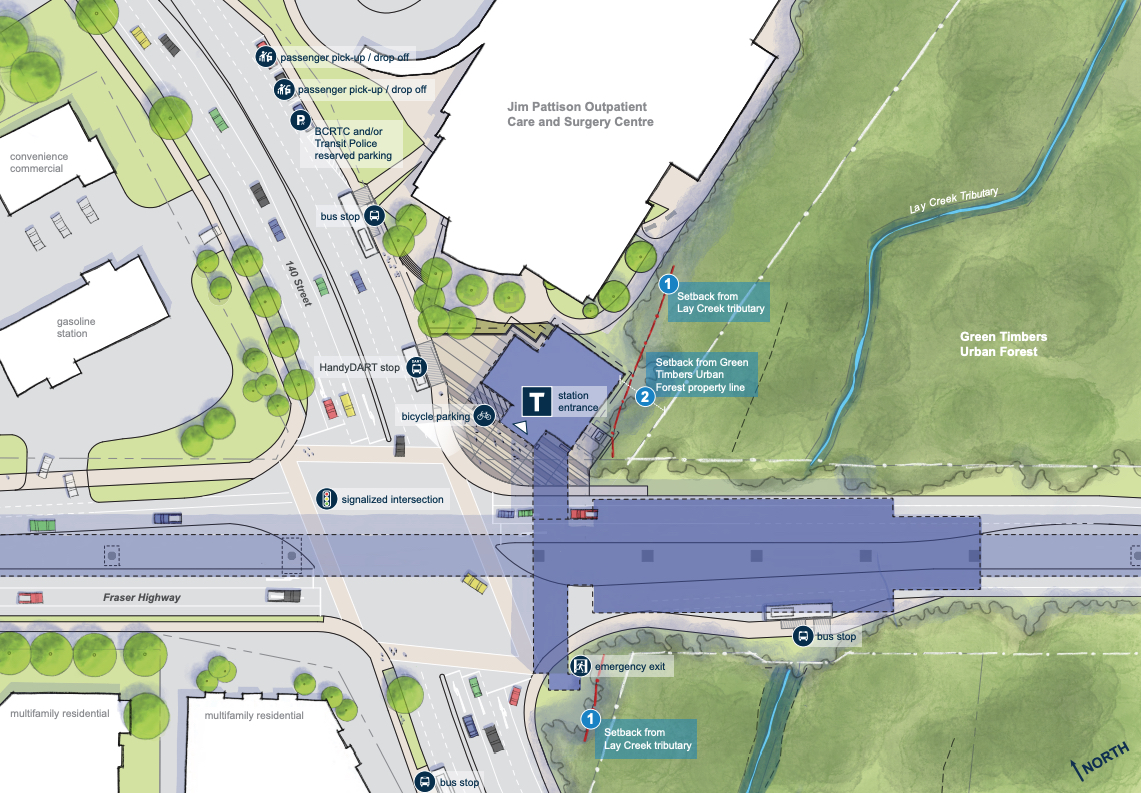 Site plan of 140 Street Station on the Expo Line’s Surrey-Langley SkyTrain Extension. Click on the image for an enlarged version. (TransLink)

As part of the SkyTrain extension, the 1.5-km-long stretch of Fraser Highway through Green Timbers — between 140 Street and 148 Street — will be widened from the existing two lanes to four lanes. This aligns with the roadway’s current four-lane standard beyond Green Timbers to the west and east.

The northwest corner of the intersection of 152 Street and Fraser Highway will be the site of 152 Street Station, serving a retail area and low-density residential.

This station will have side platforms and in-station retail. 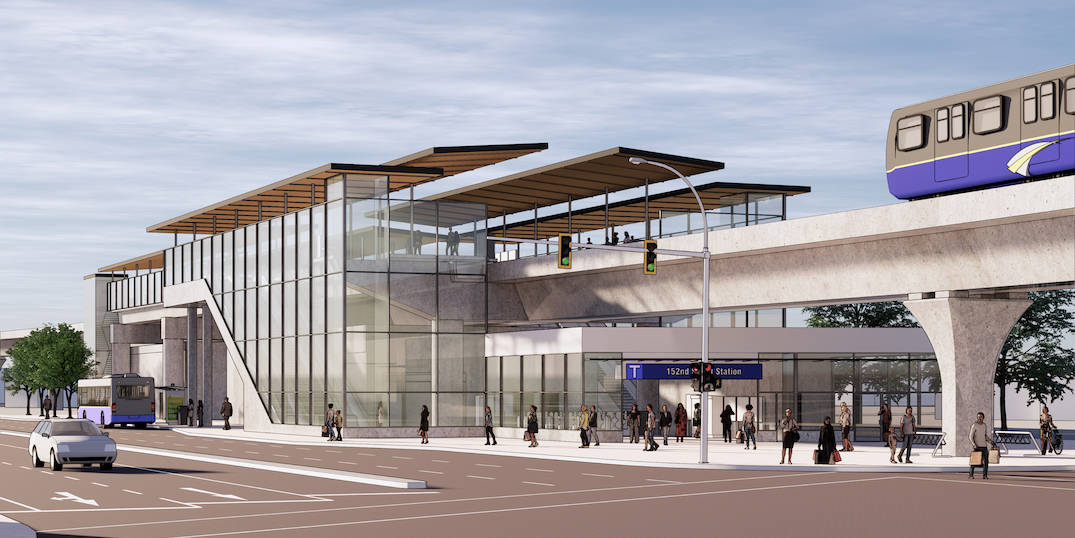 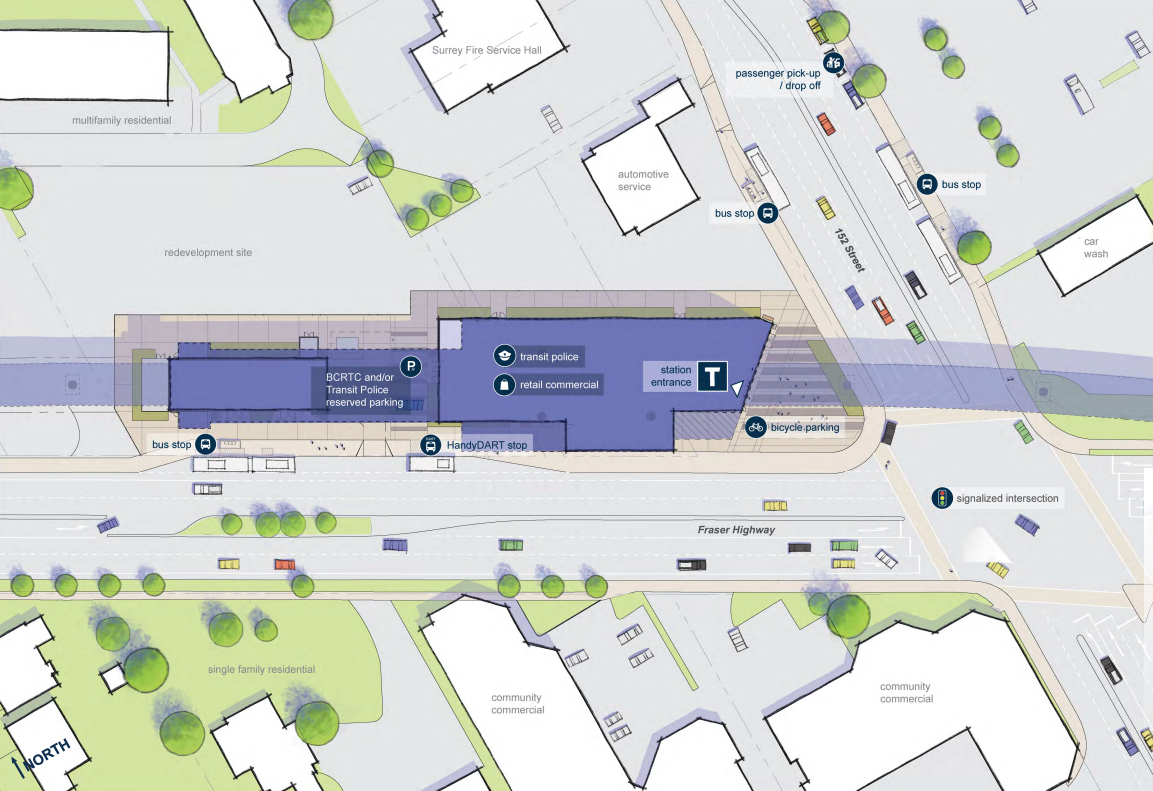 Site plan of 152 Street Station on the Expo Line’s Surrey-Langley SkyTrain Extension. Click on the image for an enlarged version. (TransLink)

The proposed design of 160 Street Station is located at the northeast corner of the intersection of 160 Street and Fraser Highway. There will be side platforms and retail.

The area is currently a retail district surrounded by some multi-family housing. Fleetwood Community Centre is located nearby.

Immediately east of the station on the north side of the block, Bocci Developments is proposing a major mixed-use redevelopment on the five-acre site of 16065-16099 Fraser Highway, with towers up to 57 storeys containing 1,320 homes and about 87,000 sq. ft. of commercial space, such as retail, restaurant, and office. 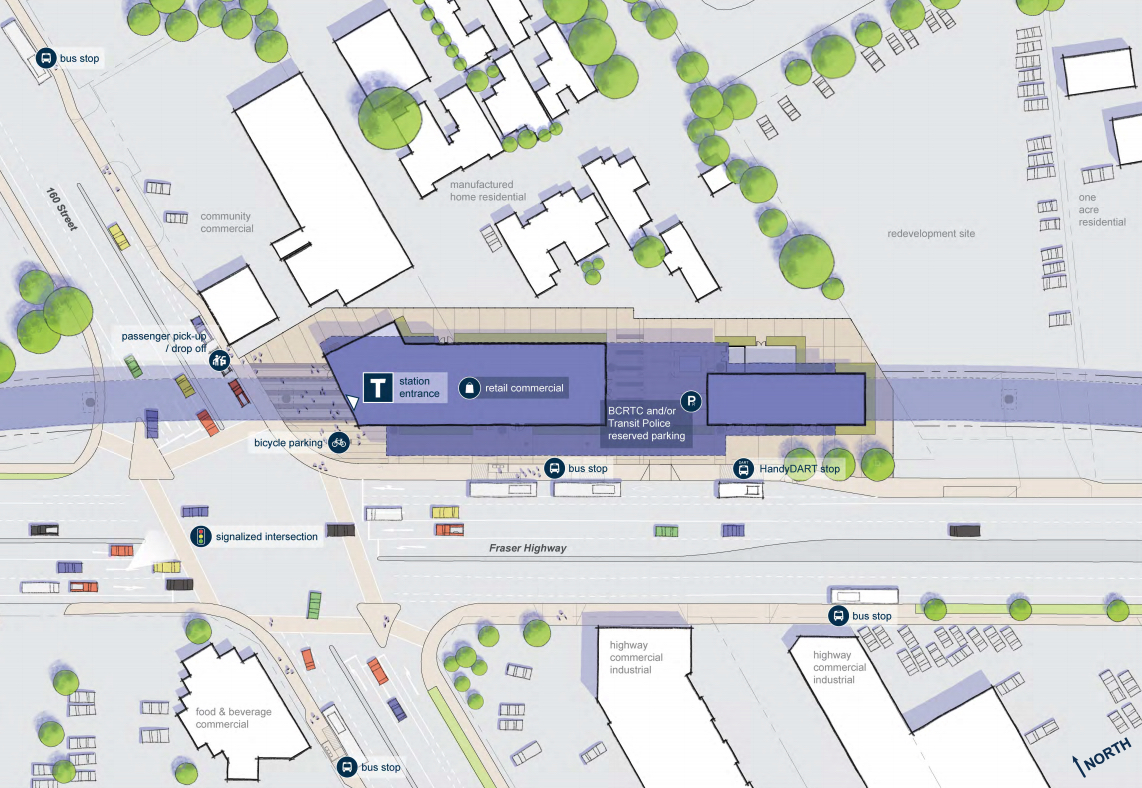 Site plan of 160 Street Station on the Expo Line’s Surrey-Langley SkyTrain Extension. Click on the image for an enlarged version. (TransLink) 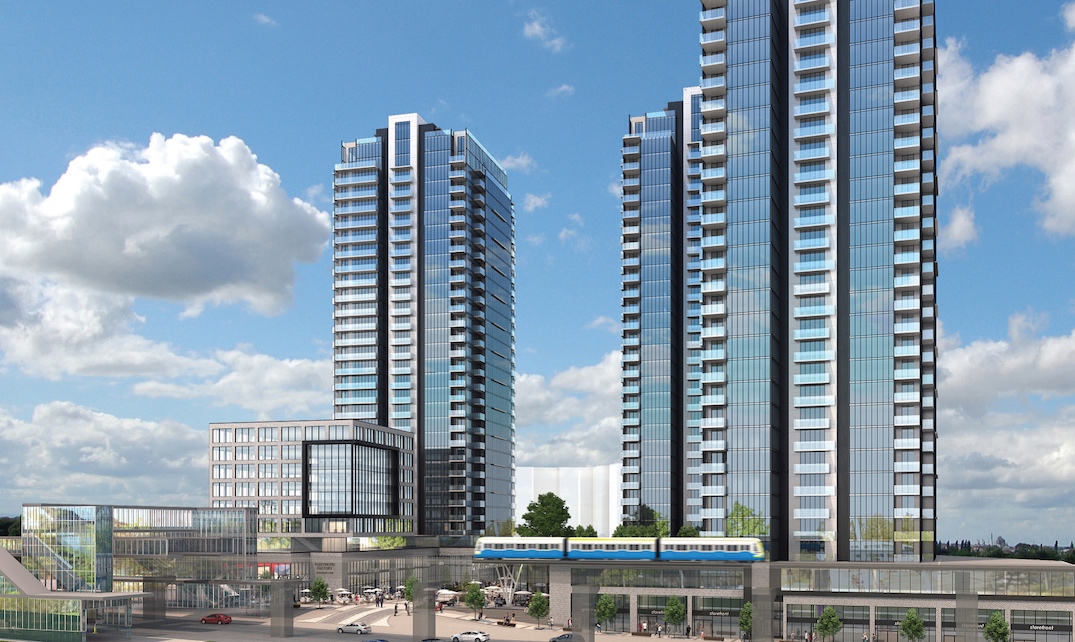 Until the second stage of the SkyTrain project to Langley Centre is complete, 166 Street Station in Fleetwood will be the new easternmost terminus of the Expo Line.

It will have centre platforms, retail, secured bike parkade, and a Transit Police station.

While all stations will have bus stops, 166 Street Station will feature a major bus exchange for both north-south bus connections and the remaining bus journey to Langley Centre. 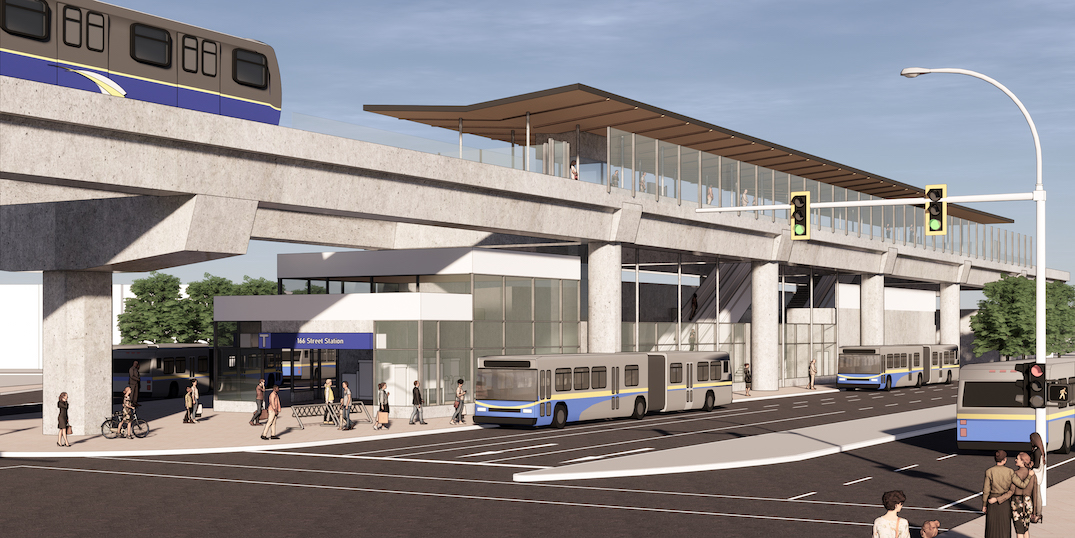 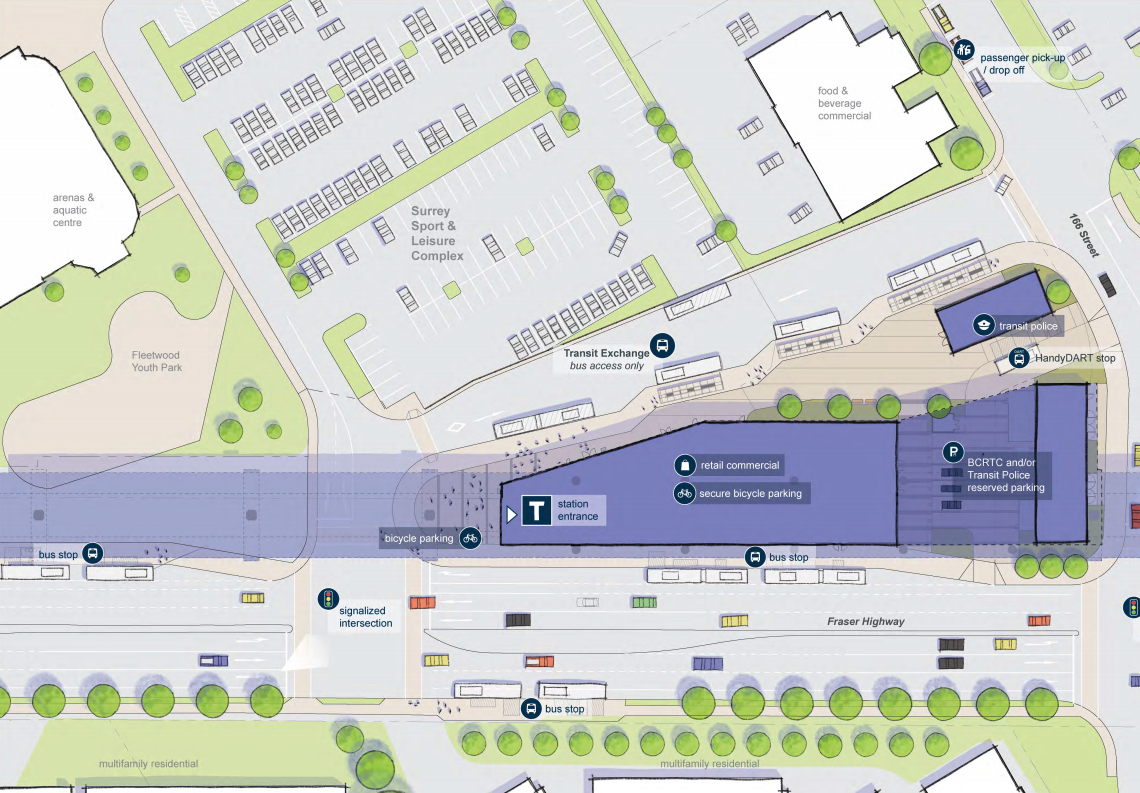 Site plan of 166 Street Station on the Expo Line’s Surrey-Langley SkyTrain Extension. Click on the image for an enlarged version. (TransLink) 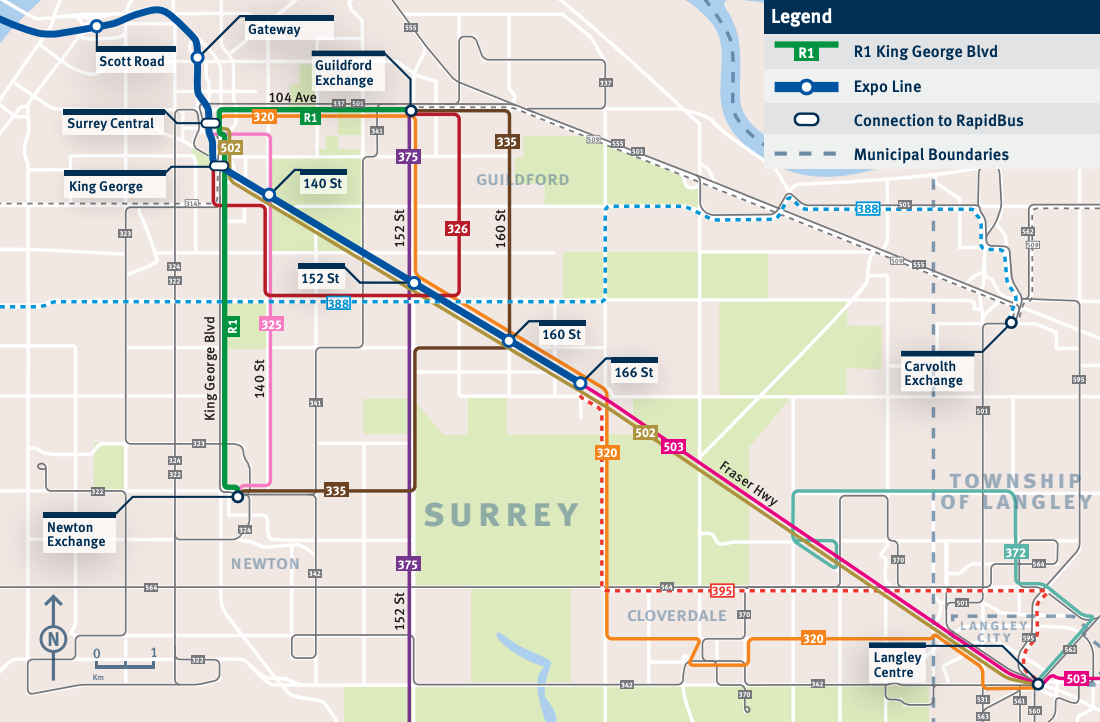 The public can provide their feedback in an online survey between September 18 and October 4, 2020.

“The Surrey Langley SkyTrain is a key priority for the region to help manage future planned growth so it is important that we get the project shovel-ready,” said TransLink CEO Kevin Desmond in a statement.

“While we deferred this round of public engagement from spring to fall due to COVID-19, we are keen to resume this work and forge ahead safely. That is why we are working with senior governments to prepare for project approval so that we can then start the procurement process to secure a project contractor for construction.”

After the business case approval by the federal and provincial governments, TransLink is expected to launch the bidding process for a construction contractor in early 2021. Early this month, Premier John Horgan indicated there will be an announcement on this project “soon.”

Construction could begin in 2022 for a completion in 2025, the same year the Millennium Line Broadway Extension to Arbutus will open.

TransLink has indicated the first stage from King George Station to Fleetwood will have a travel time of 9.5 minutes, with ridership growing to an average of 39,900 weekday boardings a decade after opening.

The full $3.1-billion extension between King George Station and 203 Street in Langley Centre — eight stations along 16 kms — will take 22 minutes. Average weekday boardings will grow to 62,000 by 2035.

On a transfer-less, one-train Expo Line ride from Waterfront Station, it will take 50 minutes to reach 166 Street Station and about one hour to reach 203 Street.