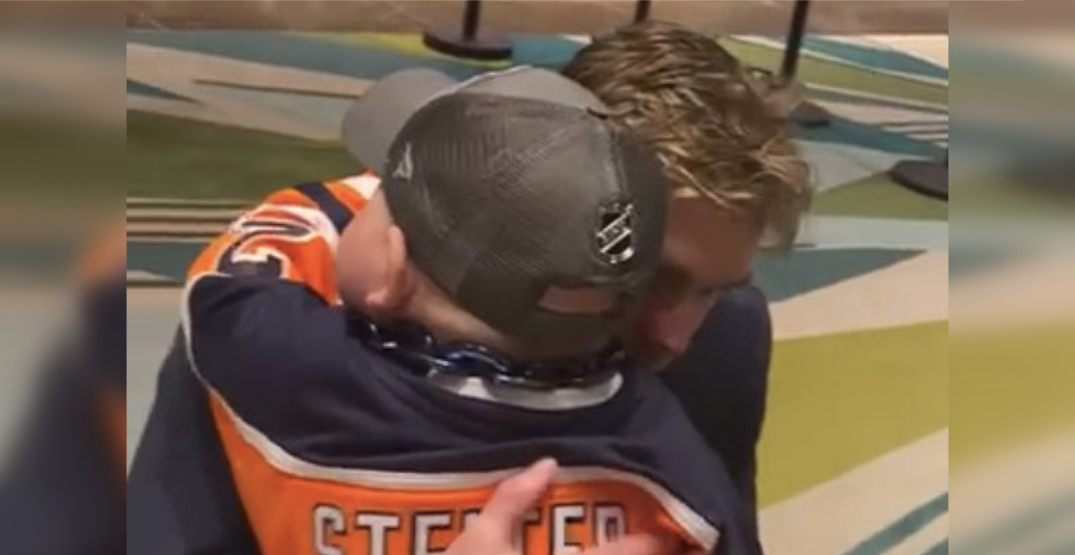 Five-year-old cancer-fighting superfan Ben Stelter wasn’t discouraged by a Game 4 loss to the Los Angeles Kings in the Edmonton Oilers’ opening round series.

So much so that he consoled Oilers captain Connor McDavid after the 4-0 setback that evened the best-of-7 series at two wins apiece.

“You’ve got this buddy,” Ben told McDavid, according to Ron Lawrence, Ben’s grandfather.

Ben was in California to cheer on the Oilers and visit Disneyland.

With Ben in attendance, the Oilers had gone 9-0. All nine of the wins came at Rogers Place in Edmonton. Quite the good-luck charm for the Oilers, who are hoping to advance beyond the first round of the Stanley Cup Playoffs for the first time since 2017.

Ben was diagnosed with a type of brain cancer known as glioblastoma over one year ago. He underwent four rounds of chemotherapy and 30 radiation treatment sessions to remove it, but the tumour returned before Christmas, prompting Ben to continue his battle with additional rounds of radiation.

He’s become an Oilers icon ever since, serving as the team’s Scotiabank Skater for Edmonton’s 5-2 win against the San Jose Sharks on March 25. The game, which featured Ben post-game and in the dressing room, kicked off the run of nine straight wins with him watching in person.

Ben’s captured the hearts of all hockey fans ever since.

“The Oilers have been so amazing to him,” Ben’s father Mike Stelter told NHL.com last month. “They’ve been a world class organization for how they treated him. We didn’t expect everything to blow up as it has, but they’ve helped make it happen with him along the whole way.”

So much so, that he’s got his own Upper Deck hockey card with he and McDavid, available in e-Packs for a limited time with all net proceeds directed to the Kids With Cancer Society.

The Oilers host the Kings in Game 5 on Wednesday.

If Ben’s in attendance, he’ll surely bring that luck back to Edmonton.