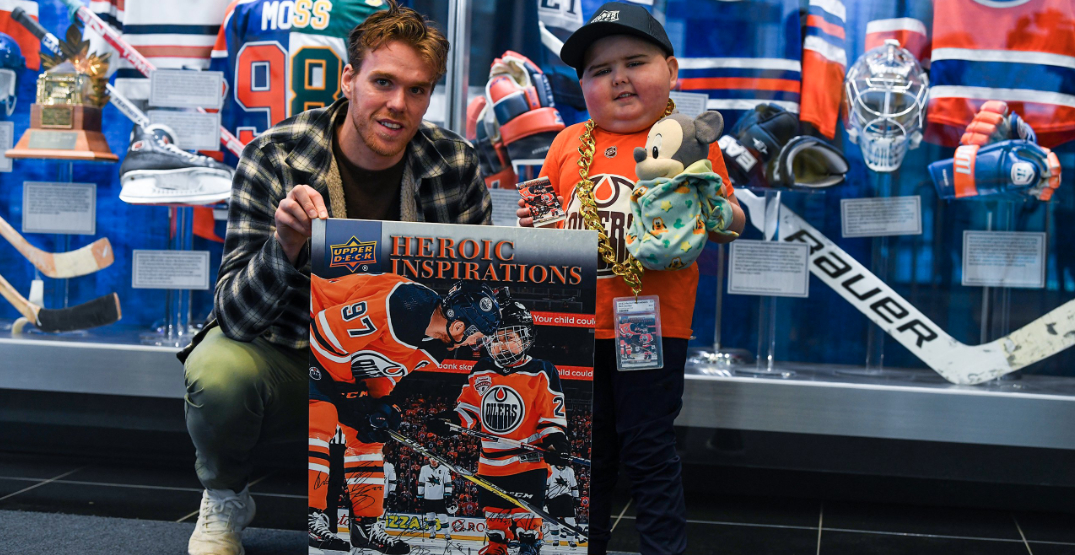 The Edmonton Oilers good-luck charm got a little treat in advance of the Stanley Cup Playoffs.

Five-year-old Ben Stelter, who has a type of brain cancer known as glioblastoma and has become a bit of a fixture at Edmonton’s home games this spring, was presented with his own Upper Deck hockey card by Oilers captain Connor McDavid yesterday.

Ben was presented with his own card featuring him and McDavid, as well as a larger replica signed by the Oilers, at the morning skate.

In addition to being our good luck charm as usual last night, Ben was presented with his very own licensed @UpperDeckSports trading card by his buddy Connor. 👏 pic.twitter.com/2Ojk9BqLoR

Ben was initially introduced to Oil Country when he stole the show as an extra special Scotiabank Skater in advance of Edmonton’s 5-2 win against the San Jose Sharks on March 25.

“He lit up the building pretty quickly, so I think it was pretty easy to get up for the game after Ben skated on the ice,” Oilers goalie Mike Smith said at the time.

“It always puts things into perspective when you see a little guy like that and what he’s been through to get on the ice like that and get Rogers Arena bopping right from the first faceoff. Obviously, an inspiration to us all and I’m happy we got a big win for him.”

✨Going all out for Ben tonight✨ pic.twitter.com/Xd6xgcnUtp

Ben was diagnosed with the tumour over one year ago and underwent four rounds of chemotherapy and 30 radiation treatment sessions to remove it. The tumour returned before Christmas, prompting Ben to continue his battle with additional rounds of radiation.

“I had the opportunity to meet Ben earlier this year and just fell in love with him right away,” McDavid said in late March. “He lights up every room he’s in. Just seeing him skate out there for the starting lineup was pretty special for me, and to see the crowd react like they did was really cool.

Officially 9-0-0 with Ben Stelter in the building. #LetsGoOilers pic.twitter.com/cI0GfKsT8P

Since his debut in March, Ben has attended nine Oilers games.

Perhaps he’ll bring a little extra luck to a Stanley Cup push, too.