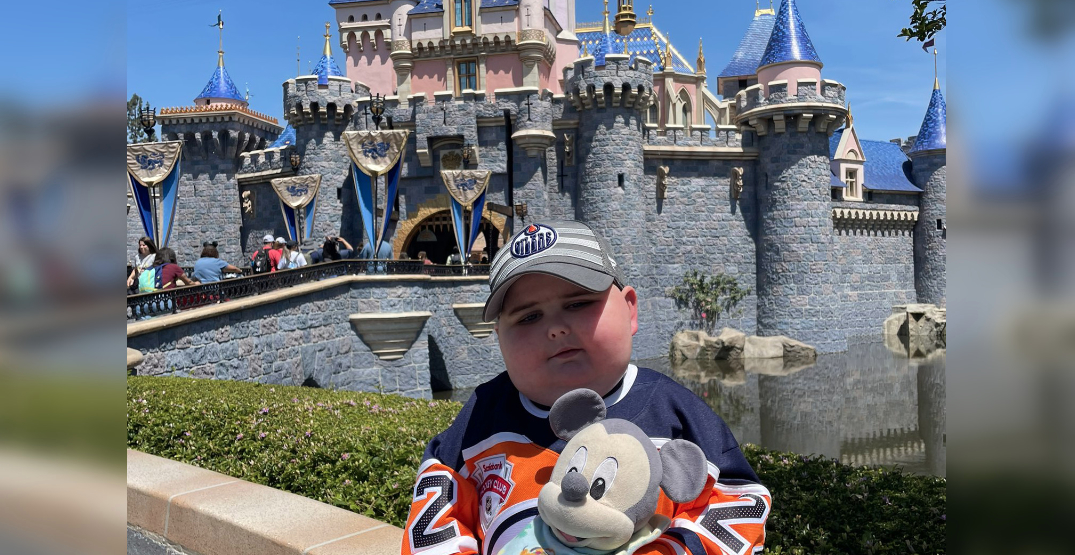 The five-year-old Edmonton Oilers good luck charm and cancer fighter is joining his favourite team on the road for Game 4 in their opening-round Stanley Cup Playoffs series against the Los Angeles Kings.

Ben and his family are touring Disneyland, and will be in attendance at Crypto.com Arena as the Oilers look to take a 3-1 series lead on the Kings.

We are having a blast at Disneyland and Ben’s ready to cheer the team on tonight. We can’t get to the game tonight but we will be there Sunday! #BenOilersStrong @EdmontonOilers pic.twitter.com/T5SW4tIhxe

Ben has a type of brain cancer known as glioblastoma, and was diagnosed with the tumour over one year ago. He underwent four rounds of chemotherapy and 30 radiation treatment sessions to remove it, but the tumour returned before Christmas, prompting Ben to continue his battle with additional rounds of radiation.

He has become a bit of a fixture at Edmonton’s home games this spring.

“The Oilers have been so amazing to him,” Ben’s father Mike Stelter told NHL.com. “They’ve been a world class organization for how they treated him. We didn’t expect everything to blow up as it has, but they’ve helped make it happen with him along the whole way.”

Ben was initially introduced to Oil Country when he won hearts as the Scotiabank Skater in advance of Edmonton’s 5-2 win against the San Jose Sharks on March 25.

He was presented with his own hockey card featuring him and Connor McDavid, as well as a larger replica signed by the Oilers, last week. His official trading card is now on e-Pack for a limited time, and “all net proceeds will go directly to the Kids With Cancer Society,” according to Upper Deck.

“I think for most guys in there, it’s a little dose of reality, to realize there’s bigger things out there than hockey,” Oilers forward Derek Ryan said at the time. “We’re trying to build up for a playoff run here, but at the end of the day, there are a lot of things bigger than hockey, so it brings that into the locker room for sure.”

Since his first appearance, the Oilers are 9-0 with him in attendance at Rogers Place.

Now, that luck is on the road.