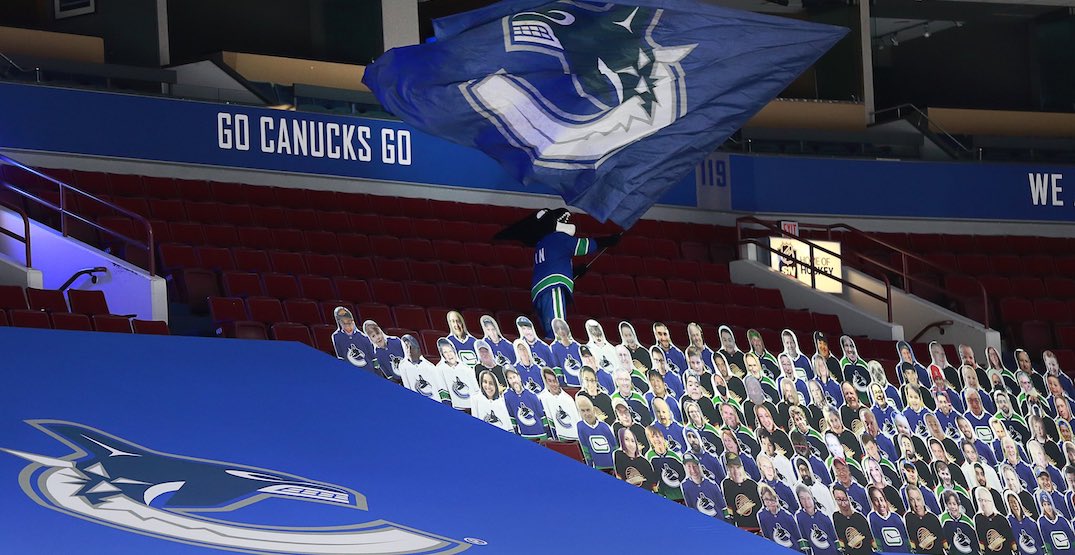 It was nice to see Fin back at Rogers Arena earlier this week.

The Vancouver Canucks mascot attended Tuesday’s win against the Toronto Maple Leafs, which was the first time he has been spotted at a game since the start of the pandemic.

Fin was in attendance for autism acceptance night, and the plan is to bring him back for the final game of the season as well.

The person that plays Fin — yes, it’s the same person every time — has worked for the Canucks for almost 20 years. Prior to the pandemic, Fin (we’ll protect the person’s secret identity) worked for the team full-time.

Patrick Johnston of Postmedia reported that Fin was no longer full-time with the team back in December, as the Canucks let go most of its office staff due to the pandemic.

Alright to clarify the man inside Fin is now a freelance mascot, no longer full time staff. Fin the suit lives on and still available for appearances.

It should be pointed out that while Fin hasn’t been a fixture at games, he has still been present in the community.

Fin made surprise visits to a number of hospitals early on in the pandemic, spreading cheer to frontline healthcare workers. The Canucks mascot and the “Finmobile” have been busy for the past 14 months, as Fin has completed more than 500 birthday visits — all done safely while physically distancing.

You can book Fin for $100, which includes a “physically distanced driveway visit,” a free cake voucher, and a $25 Save-On-Foods gift card.

All I have to offer are some Snapshots, but they’re absolutely free.

Tyler Motte was back on the ice today for the first time since the COVID-19 outbreak.

The 26-year-old is the last non-injured player to return to the ice since the outbreak, which suggests he may have been hit the hardest by COVID-19. Motte’s name came off the COVID list nine days ago, but clearly the affects of the virus lingered with him.

“Motter is a big part of our group. He’s a good hockey player. Brings us some speed, some tenacity. When he’s not in the lineup, we miss him.”

Former Canucks forward Josh Leivo joined the NHL’s COVID protocol list today. The Calgary Flames cancelled their morning skate because of it, doing so out of precaution because of a positive test.

It appears that everyone else has tested negative so far, and the game between the Flames and Canadiens is set to go ahead tonight.

From what we know about the Canucks outbreak, the NHL seems to be taking a risk here.

If you’ll recall, Adam Gaudette was tested on March 29, and it was returned positive one day later during practice. It wasn’t until March 31 that two more people tested positive, which began a wave of infections that didn’t end until 25 members of the organization had contracted the virus.

Leivo was with his teammates at practice as late as yesterday.

While Canucks newcomers have been elevated up the lineup, Gaudette has only appeared in one game since the Chicago Blackhawks traded for him last week. He notched an assist in just 7:39 of ice time.

One of Jason Botchford’s famous phrases is getting a lot of play again.

Matthew Highmore, Marc Michaelis, Jayce Hawryluk, Jimmy Vesey, and Travis Boyd all suited up as forwards for the Canucks on Thursday. I’m not sure any of them would be recognized if they walked up and down Robson Street today.

If that doesn’t qualify as a Sea of Granlund, I don’t know what does.

Granlund is still playing, by the way

The 28-year-old former Canucks forward ranked eighth in scoring, with 53 points in 50 games in his first season in Russia.

Canucks Twitter was in fine form this week, after a “#FireBenning” banner took flight.

Fans should be free to express themselves however they want (within reason, of course), and for me, this is fair game.

As many have pointed out, there are far more extreme demonstrations that take place by European soccer fans. Heck, just this week, a group of fans in Germany waited for the team bus so that they could egg their own players and chase them through the streets. Now that’s crossing the line.

My biggest critique of the banner was the timing. The team had just come off a long layoff due to the COVID outbreak. They were coming off back-to-back wins over the Toronto Maple Leafs.

Sure the Tanner Pearson signing riled up many, and that deserves criticism. But that ranks as what, only the 50th worst move the Benning regime has made?

Guess it was the straw that broke the camel’s back.

Don Taylor and Rick Dhaliwal’s new show on CHEK can be mostly characterized as a radio show on television, but with one major difference.

If you’re from Vancouver and over the age of 30, chances are you miss Sports Page. It was adequately replaced when Taylor was hired by Sportsnet to host its Vancouver-based sports highlights show in 2001. Sportsnet stopped broadcasting highlights from the west coast in 2014 though, and we’ve been subjected to Toronto-based (and Toronto-biased) coverage ever since.

If you thought radio wars died with the end of TSN 1040, think again.

It appears Sportsnet pulled the plug on the Sekeres and Price commercial, and Matt Sekeres is firing back.

They offered to have the spot run during Sportsnet Central. We had zero interest in that.

Highlight shows are a dying breed, and theirs is way too Toronto-centric. They don't even do a proper #Canucks post-game show after regional games, so anxious to move on to Leafs & Jays.

This was the ad:

Sekeres and Price is back as a live show and can be heard from 3 to 6 pm Monday to Friday.

What to look forward to down the stretch

Unless the Canucks rattle off three straight wins against the Ottawa Senators, it’ll be safe to say the miracle playoff push will realistically be over, if it isn’t already.

With that said, here’s a few things to look forward to.

Trevor Beggs had a great piece showcasing just how impressive Hoglander’s season has been. At the risk of sounding clickbaity, he might be better than you think.

The Canucks called Kole Lind up to the taxi squad, but will they play him? Given what’s currently in their lineup, I’d suggest he’s worth a shot.

Our prospects guru Daniel Gee has a detailed breakdown of everything Lind brings to the table. I’m intrigued.

Does Vesey have anything to offer?

Fair to say it’s been a disappointing seven games so far for Jimmy Vesey. The waiver wire addition has no points and was demoted to the third line last game.

He has scored between 16-17 goals three times in his career and will be given more opportunities to succeed. Will he take advantage?

With Jordie Benn traded, Olli Juolevi will get a long look down the stretch. He’s not playing very much right now, just 13:05 last game, but he shouldn’t be sitting in the press box as a healthy scratch anymore.

Juolevi turns 23 in less than two weeks. He’s approaching that age where prospects prove they can play, or prove they can’t. He’s been alright in his rookie season, but in a heavily sheltered role.

It’s about time to throw him in the deep and see if he sinks or swims, behind that Sea of Granlund.