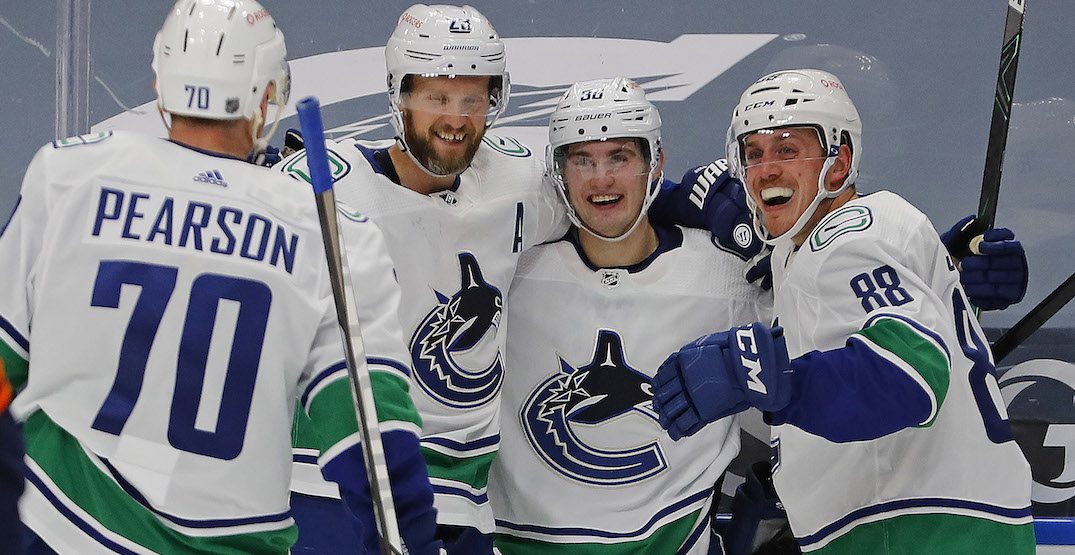 He might not win the Calder Trophy, but that doesn’t mean Vancouver Canucks rookie Nils Höglander hasn’t had an incredible rookie season.

In fact, it might be even better than you think.

Vancouver has been spoiled in four straight seasons with impressive rookies who have burst onto the scene. Of the four, Höglander’s emergence is notable because he’s the only player of that group who wasn’t a first-round pick.

Höglander has posted a respectable nine goals and 19 points in 40 games thus far, but a closer look reveals that the 20-year-old’s value goes beyond those primary statistics.

He’s already a fan favourite, but here are five reasons why Höglander has been even better than you probably think.

Despite facing tough competition while playing mainly with Bo Horvat and Tanner Perason, Höglander is the Canucks’ leader in terms of puck possession.

The Bockträsk, Sweden native is the only Canuck who has a Corsi percentage above 50% (51.1%). Quinn Hughes is the next best Canuck in terms of puck possession at 49.5%.

#Canucks' Hoglander goes between the legs before making a power move to the front of the net pic.twitter.com/elrbNuxJo8

Höglander’s greatest skill in terms of possession is his ability to get the puck to the net. His defensive game is solid, albeit still a work in progress. However, the 61.5 shot attempts per 60 that the Canucks generate when Höglander is on the ice is the best mark on the team.

On a team that struggles with possession, the young Swede’s net-driving ability is a welcome addition.

I don’t think it’s a stretch to say that Horvat, Pearson, and Höglander have been the Canucks’ most consistent line this season.

Based on their numbers, that’s largely because of their success as a trio. There’s no doubt that with Höglander, both the Canucks captain and the former Stanley Cup champion have thrived.

Without Höglander, both Horvat and Pearson’s possession statistics plummet.

Höglander’s number dip without Horvat and Pearson as well (he has a Corsi-for percentage hanging around 48%) but the dip isn’t as dramatic.

It’s clear that all three players make each other better, but the young Swede’s impact on the second line cannot be understated.

3. Scoring goals in many different ways

We knew before Höglander even played an NHL game that he scored score in a variety of different ways.

Watching Hoglander pull of the lacrosse goal with pace will never get old. #Canucks pic.twitter.com/cI13LUFMYN

Although the lacrosse goal has yet to come, we’ve seen a barrage of different goals from the rookie.

NHL.com tracks the type of goals scored by a player in seven different categories. Here’s the breakdown of Höglander’s goals so far this season.

Only three other rookies (Kirill Kaprizov, Jason Robertson, Josh Norris) have scored in five or more ways this season. Of those rookies, only Kaprizov has scored more than one goal in three different categories.

Speaking of goals and putting up points, Höglander has emerged as one of the Canucks greatest offensive threats.

He’s also accomplished this without much time or success on the power play. Höglander has been stapled to the second unit, and he has just one power play goal this season. Aside from that, the rest of his points have come at five-on-five.

It’s easy to forget about this, but Höglander has actually played through two COVID-19 outbreaks in the past six months.

Höglander was having an impressive season in Sweden back in the fall before his team, Rogle, was shut down in November for a couple of weeks due to a COVID-19 outbreak. Despite the shutdown, Höglander left the SHL with an impressive 14 points in 23 games.

In Vancouver, he endured yet another COVID-19 outbreak. We heard Brandon Sutter talk about how he felt bad for the young guys who were dealing with this virus by themselves in isolation. One can only imagine that included Höglander as well.

Against all odds, Höglander has performed admirably. On the other side of the Canucks outbreak, he scored game-tying goals in the third period in back-to-back games against the Toronto Maple Leafs.

Viral outbreaks and a lack of Calder love be damned, Höglander has played far above expectations in an impressive rookie season.