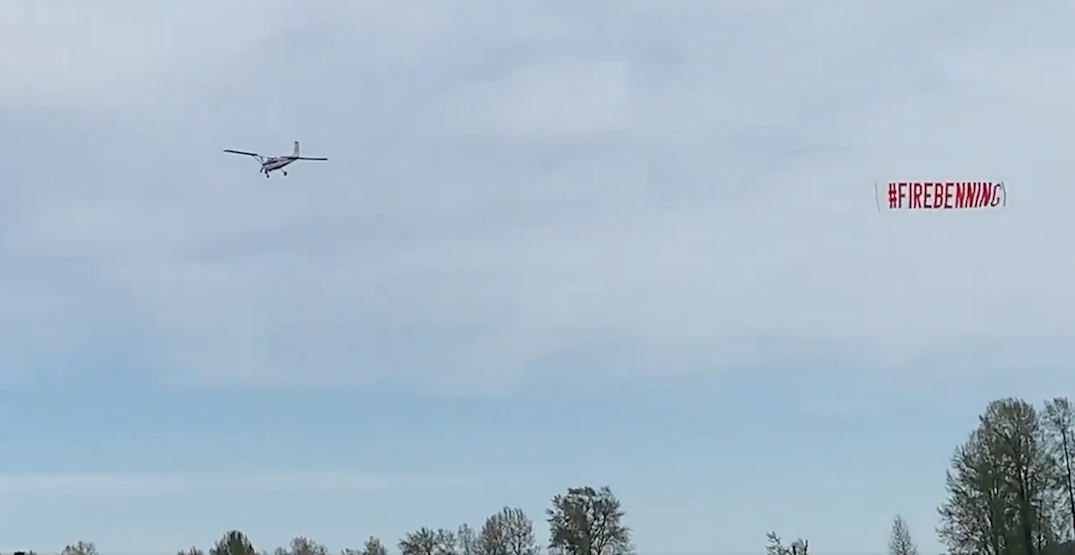 The #FireBenning movement is off the ground.

Some Canucks fans unhappy with general manager Jim Benning put their money where their mouths were, taking their protest to the sky. A GoFundMe campaign was started, raising the $1,600 necessary to fly a “#FireBenning” banner from a plane in under four hours.

The fundraiser ended up getting 103 donations totalling $2,705. The plan is to donate excess funds to the Canuck Place Children’s Hospice.

“We are only doing this because we love our team and we want a Stanley Cup,” said the fan who organized the protest, who goes by the name of “Uncle Laleet” on Twitter. “We just want someone who can bring this city what we have been craving for 50 years.”

The plane, and the banner, took off from Pitt Meadows this afternoon, and has been spotted by a few fans already. The plane is scheduled to fly near downtown Vancouver and Kitsilano between around 4 and 5 pm.

LMFAO The madman did it!

Let’s go #FireBenning the heart and soul of this fanbase has spoken. History has been made. pic.twitter.com/6dIJ59BOiv

#FireBenning ohhhhhh yea! Flying over Rogers Arena 😂 We are tired of these morons running the team. @fr_aquilini #Canucks pic.twitter.com/vbAtYe0X8Y

Couldn’t quite get the camera out in time. @Canucks #firebenning just passed through Poco pic.twitter.com/M2YwwKa8zf

It's 100% hilarious that someone is flying a plane around greater Vancouver right now with a banner that says #FireBenning, but the timing is off. They just won back-to-back games against the Mighty Maple Leafs. This pilot couldn't wait until they drop a few to Ottawa? 🤦‍♂️#Canucks pic.twitter.com/LmDXXXXq9U