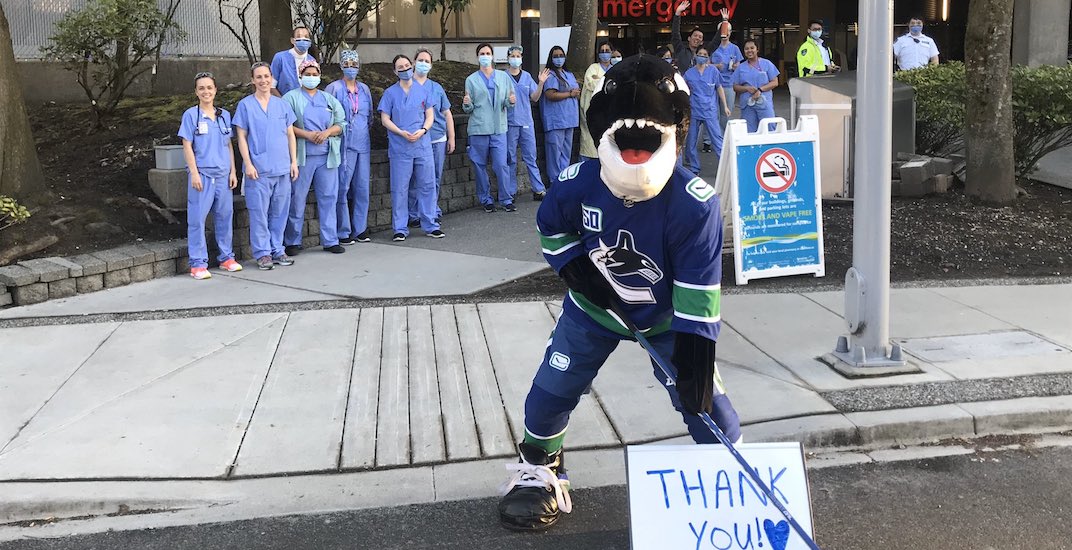 The NHL may be on pause, but Vancouver Canucks mascot Fin is hard at work saluting hospital workers and cheering up children in the community.

The whale was seen outside Lions Gate Hospital in North Vancouver on Tuesday, giving stick taps for healthcare workers at 7 pm with a sign that said “thank you.”

It’s one of many appearances for the Canucks mascot, who is still touring the community, at a safe distance. Other visits this week included stops at Vancouver General Hospital and Burnaby Hospital.

“Normally Fin is really busy with community appearances. So, he has adapted to the new reality to share some joy with Canuck Nation and to recognize our health workers for all they do for us,” a Canucks spokesperson told Daily Hive.

“At his surprise hospital salutes, Fin plays the Canucks goal horn through the Fin Mobile roof speakers, with green and blue flashing lights.”

To date, Fin has visited six hospitals, as well as Canuck Place Children’s Hospice, and the Canucks say more surprises are yet to come.

Fin has also taken it upon himself to cheer up children in the community doing drive-by birthday visits. Without the ability to host a birthday party with friends, this may be the next best thing.

For a minimum $50 donation towards the Canucks for Kids Fund’s COVID-19 relief efforts, Fin is visiting children around Metro Vancouver. Remaining at least a hockey stick-length away, the lovable whale blasts “happy birthday music” through the Fin Mobile’s exterior speakers.

The Canucks say Fin is doing several visits per week, with stops so far in Vancouver, Burnaby, Coquitlam, Surrey, Langley, and West Vancouver.

“Fin is in the process of creating online workout videos for kids,” a Canucks spokesperson added.

The Canucks mascot is also creating online “Fin’s Friends” content for kids ages 4-7, and doing videos with a teacher where they read books to kids on YouTube and Instagram. Presumably, the teacher is doing all of the talking.