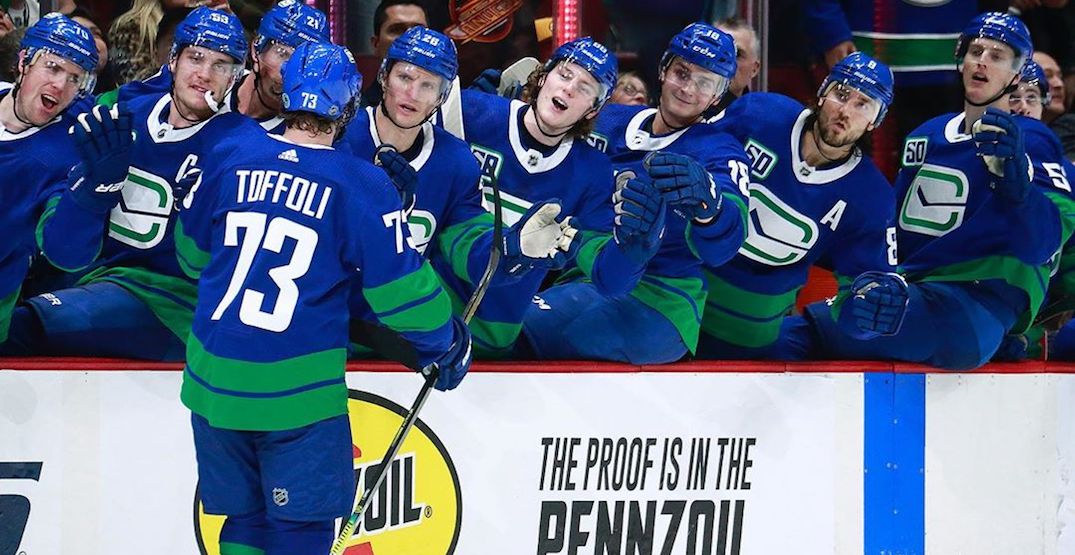 It’s been a while since the Vancouver Canucks have had a weekend like that.

The team lost four players in free agency, and none of them were particularly easy to say goodbye to.

Jacob Markstrom and Chris Tanev didn’t just leave, they signed with the Canucks’ rival in Calgary. Then Troy Stecher bolted for Detroit on a cheap deal.

So after Tyler Toffoli signed in Montreal on Monday for less than expected, Canucks fans were pissed.

Sure, the team had signed Braden Holtby to fill Markstrom’s spot in goal, but otherwise free agency was an unmitigated disaster. #FireBenning was trending on Twitter, but by the evening, Jim Benning had won many fans back after fleecing the Vegas Golden Knights for top pairing defenceman Nate Schmidt in a salary dump.

Benning truly pulled a rabbit out of a hat in the Schmidt trade and deserves credit for it.

While a flat cap and Roberto Luongo’s recapture penalty weren’t Benning’s fault and have hurt his ability to make moves this offseason, after years of cap mismanagement, he deserves to shoulder a significant amount of blame.

Paying for past mistakes

The Canucks entered free agency with money to spend, but not nearly enough to retain all of their high-profile UFAs. When you consider that Vancouver’s best players, Elias Pettersson and Quinn Hughes, are still on cheap entry-level contracts for another season, that’s baffling.

Some have praised Benning’s restraint in free agency, refusing to overpay Markstrom and Tanev, who signed contracts the Flames will one day regret. But was this restraint, or constraint due to the salary cap?

It’s not Benning’s fault that Luongo’s recapture penalty counts $3.035 million against the cap, but he can’t blame Mike Gillis for anything else anymore. It’s also not his fault that a once-in-a-century pandemic resulted in a flat cap, but the low end estimate for the cap rising was only $2.5 million more than it is currently, and players are available at bargain prices now because of it.

Year after year, the Canucks GM has overpaid for bottom-six forwards and bottom pairing defencemen, both in terms of money and term. He’s been able to save himself from some of them, like Erik Gudbranson, and you can argue the degree of value that the likes of Brandon Sutter, Jay Beagle, and Antoine Roussel provide — though certainly they’re overpaid.

But when the Canucks were ousted by Vegas in the playoffs, Loui Eriksson and Jordie Benn watched from the press box. Sven Baertschi, who spent the majority of the season in the AHL, and Ryan Spooner, now a KHL player, didn’t help either.

Until now, the team hasn’t really paid a big price for Benning’s blunders, because they had money to spend. It’s all coming home to roost now, as the team watched good players leave town for contracts that resemble regrettable ones they signed with ineffective players in years past.

Some fans are sick of hearing about the contracts of Eriksson and Sutter, and indeed those deals were signed a long time ago. But the problem is Benning hasn’t learned his lesson, signing regrettable deal after regrettable deal in the years that followed.

Every GM makes mistakes, but few have a rap sheet like this:

If you want to defend any of these contracts, consider that none of them are likely tradeable at this point. That makes them liabilities, not assets, no matter how good they are at being leaders, winning faceoffs, or whatever it is that Eriksson does.

With that said, that doesn’t mean the Canucks should have matched every contract that was handed out to their UFAs. This is about opportunity cost.

The Canucks pounced on an opportunity to grab a top-pairing defenceman, one they’ve coveted for a long time, in their trade with Vegas.

Unfortunately though, this will necessitate a cap-clearing move to make space for him — likely in the neighbourhood of $2 million, depending on what cap number is restricted free agents Jake Virtanen and Adam Gaudette.

That could mean a player like Virtanen or Tanner Pearson is shipped out for a draft pick, leaving the team even thinner than they already are on forward.

Benning would surely like to move one of his undesirable contracts out instead, but that will require a sweetener from Vancouver.

That’s not to say that grabbing Schmidt was a mistake, indeed it wasn’t. He instantly becomes the team’s second-best defenceman, and gives the Canucks a more dynamic back end.

But imagine for a second if the Canucks had even just 2-3 fewer albatross contracts on their books. Now imagine that the team could have matched the one-year deal Taylor Hall got to go to Buffalo.

Or at the very least, imagine if the Canucks could have offered something reasonable to both Toffoli and Stecher. Toffoli was a perfect fit on not only the Canucks’ top line, but their first unit power play as well. Stecher was a bottom-pairing defenceman, but played hard minutes as Alex Edler’s defence partner.

Neither Toffoli or Stecher has been replaced yet, and it’ll take some serious salary cap gymnastics to find a way to do it.

Instead of competing for a Stanley Cup in the next couple of seasons, it appears the team will have to wait for their window to open.

They’ll be competitive, maybe even a playoff team. And certainly there is the possibility of improvement from within from their excellent young core group of players.

The good news is, the Canucks appear to have a Stanley Cup calibre core already, and Benning deserves credit for that. Pettersson and Hughes are the real deal, and are only going to get better. Bo Horvat, J.T. Miller, Brock Boeser, and newcomer Schmidt are excellent core pieces as well. If Demko can become a top tier goalie and some of their prospects develop quickly — particularly one or two on defence — this could be a Stanley Cup contender in not too long.