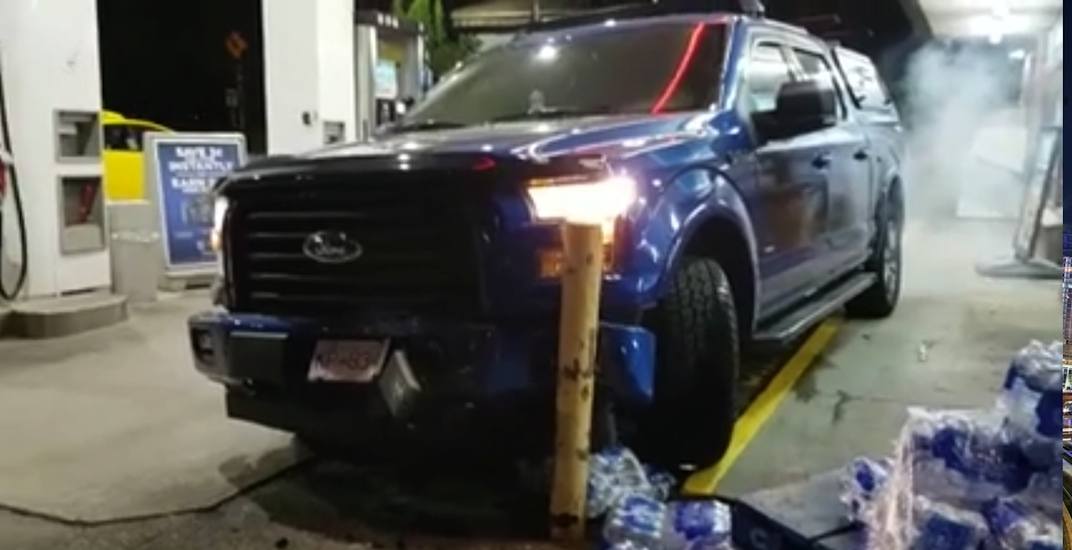 “Are you stupid?” That’s what a witness said on video to a male driver who crashed his truck repeatedly at a Vancouver gas station on Thursday night.

In a video posted to Reddit, a driver of a blue pickup truck at the Petro Canada station at the intersection of Knight Street and East 57th Avenue is seen attempting to drive in the narrow space between the cars being pumped with fuel and the station’s 7-Eleven retail building.

But he awkwardly fails, crashing his truck into a yellow bollard and then a pallet stacked with cases of bottled water, toppling it over.

The drivers of the cars parked next to the pumps and the truck are seen leaving, including one woman who rushes to get her car out of harm’s way. Screams can also be heard.

After the initial crash, the confused-looking driver exits his vehicle to determine the problem. But after entering the vehicle again, the driver crashes into the same bollard a second time and damages his car even further.

The witness then yells: “Can somebody dial 9-1-1?” Moments later, the truck accelerates out of the gas station and flees the scene.

Later on, police were able to identify the driver, who is a resident of Richmond. His truck was seized, and a 24-hour driving prohibition and several violation tickets were issued.

Knight and 57th – “Are you stupid?” from r/vancouver