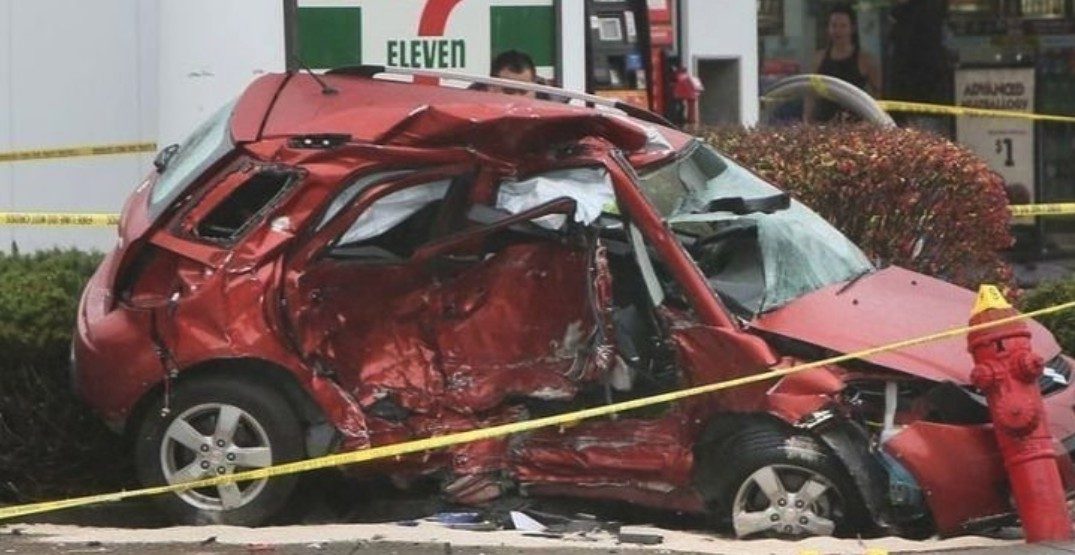 Dash cam footage showing the deadly crash in 2015 that killed 68-year-old Vancouver doctor Alphonsus Hui has been released to the public.

The footage shows Hui’s small red vehicle headed to the intersection of Oak and 41st Street.

A grey Audi comes speeding through the intersection and slams into Hui’s car, sending the vehicle flying.

Hui died on the scene and the driver of the Audi was Richmond resident, Ken Chung, who was ultimately charged with dangerous driving causing death as a result of the incident.

At the time of the crash, Chung was reportedly going 140 km/hr through the intersection.

On May 25, Chung was cleared of all charges related to the case.

“Due to the graphic and difficult nature of the video, my family and I will not be doing interviews or providing further comment at this time except to say… we hope that it speaks to the reasons why we need an immediate driving ban for Chung and changes to our legislation regarding excessive speeders with multiple offences and we hope the demands on our online petition will be met. We thank everyone for their support with the petition in the hopes that this will not happen to any other family,” wrote Hui’s daughter Monique ina Facebook post.

“We are concerned the government, our courts and ICBC are not doing enough to keep drivers who repeatedly speed excessively, off our streets. Ken Chung is still driving and it’s only a matter of time that he and others like him will hurt or kill again,” writes Hui on the petition website.

“I pray it is not your family or loved ones. I don’t want anybody else to go through what we’ve gone through in this almost three year ordeal.”

Hui has laid out a number of demands in the petition calling on the court system to punish dangerous drivers.

So far over 67,000 people have signed it. The BC Prosecution Service (BCPS) is also appealing the ruling to Chung’s aquittal.