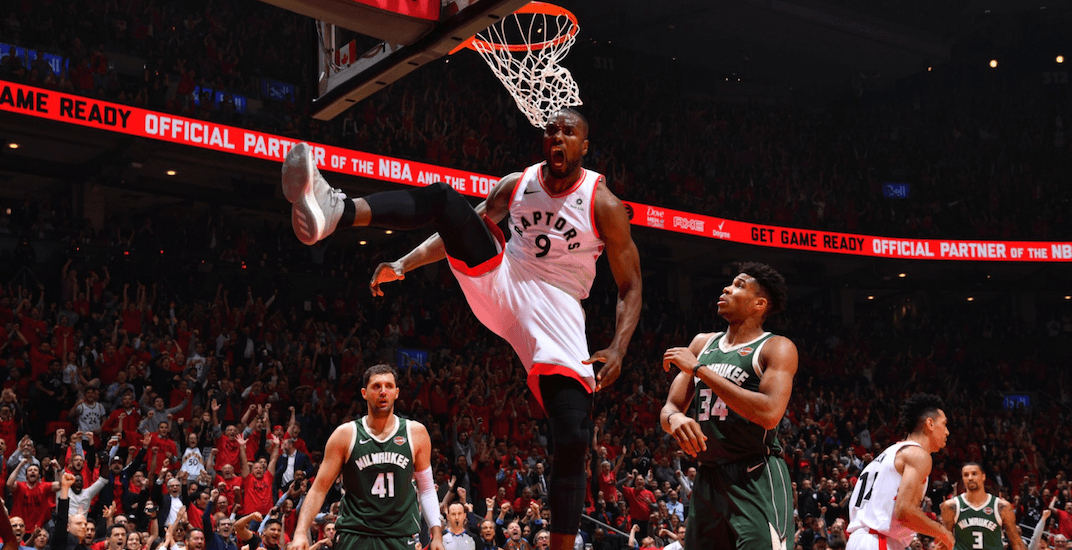 We have a series.

The Raptors came, saw, and conquered in Game 4 of the Eastern Conference Finals as they defeated the Milwaukee Bucks 120-102, tying the series up at 2-2.

After dropping the first two games in Milwaukee, Toronto was able to defend ‘The North’ and tie the series up with two straight wins on home soil.

Through the first three games of the series it was Kawhi Leonard carrying the offensive load, but it was scoring by committee in this one as the Raps got contribution from up and down their roster, including their bench.

Kyle Lowry led the way with 25 points and six assists, while Leonard finished with 19 points.

Leonard, who played a career-high 52 minutes in Game 3, was able to be used more sparingly as well. Head coach Nick Nurse chose to rest him more often, only playing Kawhi 34 minutes – the fewest minutes he has played all series.

“We knew they were going to come out and fight, we just wanted to match their energy and I think we did a good job of that tonight,” Norman Powell told media after the game.

The Raptors’ bench has been criticized for their collective play throughout this postseason, but it was clear early on that they had showed up for Game 4.

#WeTheNorth bench came through with their best performance of the playoffs pic.twitter.com/6UjaF25ex9

Serge Ibaka, Norman Powell, and Fred VanVleet combined for 28 points in the first half and finished the game with a total of 48 points, but it wasn’t just the points that got the Raptors coaching staff singing their praises.

“The best thing that [the bench players] have contributed is the rebounding,” Raptors assistant coach Nate Bjorkgren told TSN’s Kate Beirness at halftime. It was Ibaka who led the charge in that department, going ‘beast mode’ while creating some huge second chance opportunities.

The two-handed dunks from Ibaka were pretty standard on this outing as multiple times he was able to throw it down while getting the crowd going.

As far as the play from Toronto’s big men went, it wasn’t just Ibaka who was impressive on the night. Marc Gasol had his second double-digit scoring affair in as many games, finishing with 17 points. For Gasol, it was his passing that dazzled the fans.

Gasol looked like a seven-foot point guard, finding Leonard with back door passes multiple times throughout the game, and racked up seven assists.

Milwaukee came out to a blazing start in the first quarter, going up 12-5 early on, but the Raptors clawed back to lead 32-31 after one. Riding it’s bench players, Toronto went on a 9-0 run to start the second quarter and played comfortably into halftime with a 65-55 lead.

Kyle Lowry (18 PTS) & Serge Ibaka (12 PTS) guide the @Raptors to a lead at the break in Toronto! #WeTheNorth #NBAPlayoffs

The Raptors never looked back from there, coasting through the second half en-route to victory.

For Milwaukee, it was a two-man show put on by Khris Middleton (30 points) and Giannis Antetokounmpo (25 points, 10 rebounds), but the Bucks weren’t able to get much help from anyone else.

Double-double from The Greek Freak tonight:

Much like it has been all postseason, it was another deafening crowd in Scotiabank Arena; however the support wasn’t confined within the walls of the stadium.

What a sight. #WeTheNorth pic.twitter.com/BT60oHKpJi

When we say that the fans were out in full force, we mean it.

The series will now return to Milwaukee for Game 5 and becomes a best-of-three battle for a chance to advance to the NBA Finals, where the Golden State Warriors are waiting. Game 5 will tip off Thursday at 8:30 pm ET / 5:30 pm PT.