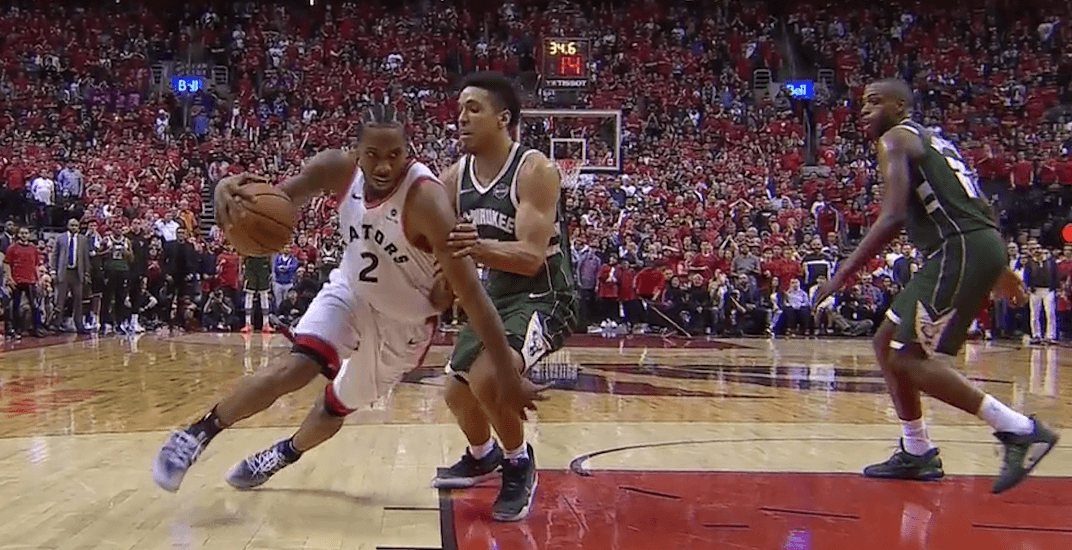 You can breathe now, Raptors fans.

It took a lot longer than it should have, but the Toronto Raptors were able to edge out the Milwaukee Bucks 118-112 in double overtime to win a dramatic Game 3 on Sunday.

The Raptors had chances to win in both regulation and the first overtime but couldn’t hit the game-clinching shots.

But in double OT, Kawhi Leonard took the game into his own hands.

KAWHI TAKES FLIGHT AND SLAMS WITH THE LEFT!#WeTheNorth 108#FearTheDeer 107

2:43 to play in 2OT on @NBAonTNT pic.twitter.com/2afPWSiBYZ

After a massive dunk to put the Raptors up by three, Leonard came up with a crucial steal and went back up court for another slam.

Then with the Raptors up 112-110, Leonard grabbed a huge offensive rebound off a Fred VanVleet miss with 1:12 to play to help lock down the victory.

Leonard finished the game with 36 points, nine rebounds, and five assists – while logging a career-high 52 minutes.

As good as Leonard was, the Raptors got some key contributions from several other players as well.

After a tough outing in Game 2, Pascal Siakam was a force in Game 3. Logging over 51 minutes, he had 25 points, 11 rebounds, three steals, and a block in double overtime that helped secure the win.

WHEN THE SPICE HITS YA pic.twitter.com/NrTiad8xWO

The Raptors also got a bounce-back performance from Marc Gasol. After only eight points through the first two games, the big man had 16 points, 12 rebounds, seven assists and five blocks while shooting 50% on Sunday.

Norman ‘Playoff’ Powell lived up to his nickname in this one, putting up 19 points off the bench, shooting 53% and 3-for-5 from three-point range.

But after fouling out in the fourth quarter, he wasn’t available for overtime.

Neither was Kyle Lowry, who also fouled out after scoring 11 points, four rebounds, and five assists.

Despite that, the Raptors were able to keep it together and edge out the Bucks, keeping themselves in the series.

The Bucks’ bench was strong once again, with Malcolm Brogdon and George Hill combining for 44 points. But the Raptors did well shutting down Giannis Antetounmpo, who only had 12 points and ended up fouling out in double overtime.

It wasn’t the most well-executed game, but it was a win and the Raptors desperately needed it.

Waking up the neighbours. #WeTheNorth pic.twitter.com/rCKA2Wv0qr