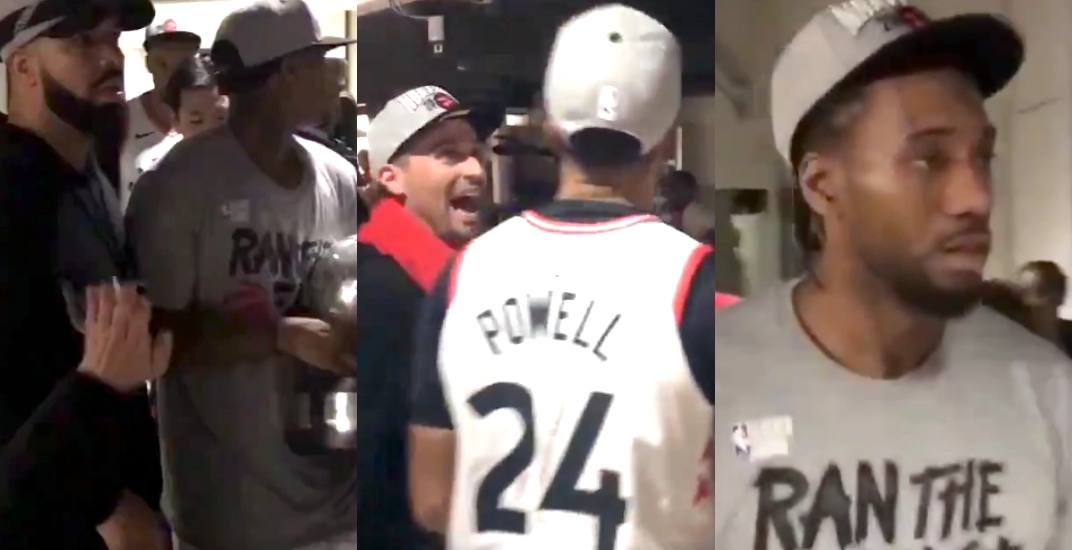 After clinching the franchise’s first-ever trip to the NBA Finals on Saturday, Toronto Raptors players made an unplanned trip to the arena concourse to greet their excited fans.

With Kyle Lowry leading the way, holding the Eastern Conference championship trophy, one-by-one players (and Drake) made their way onto the Scotiabank Arena concourse near a Suds in the Six stand.

Here’s the video taken by a fan who looked to be in the right place at the right time to see it all:

This is obviously a couple of days old…but I'm not sure how much play it got…if any. A buddy who attended game 6 sent this to me…

The @Raptors parading the Eastern Conference Championship trophy around the main concourse at @ScotiabankArena…bringing it to the FANS!

The trip was made prior to the team getting changed in the locker room, as players were still wearing their uniforms and/or Conference champion t-shirts and hats.

Players also took a trip outside to see Jurassic Park for themselves:

Watch the #Raptors check out the festivities in Jurassic Park after their Game 6 win over the #Bucks. pic.twitter.com/ISTvohNqFf

Here is a picture of Kawhi Leonard waiting to take the stage at Jurassic Park. In the end, most of the fans were gone so the players went back inside. Should have stuck around… @Raptors for @reuterspictures pic.twitter.com/lOBtNB1CaF

That wasn’t the end of player-fan interactions, as this video posted by Fred VanVleet showed:

VanVleet can't even get on the road 😂 (NSFW)

Marc Gasol was even seen high-fiving fans from his vehicle:

Marc Gasol high-fives @Raptors fans as him and his driver attempt to drive off from Scotiabank Arena.
👋✋#WeTheNorth pic.twitter.com/PGgYB9Vtxi