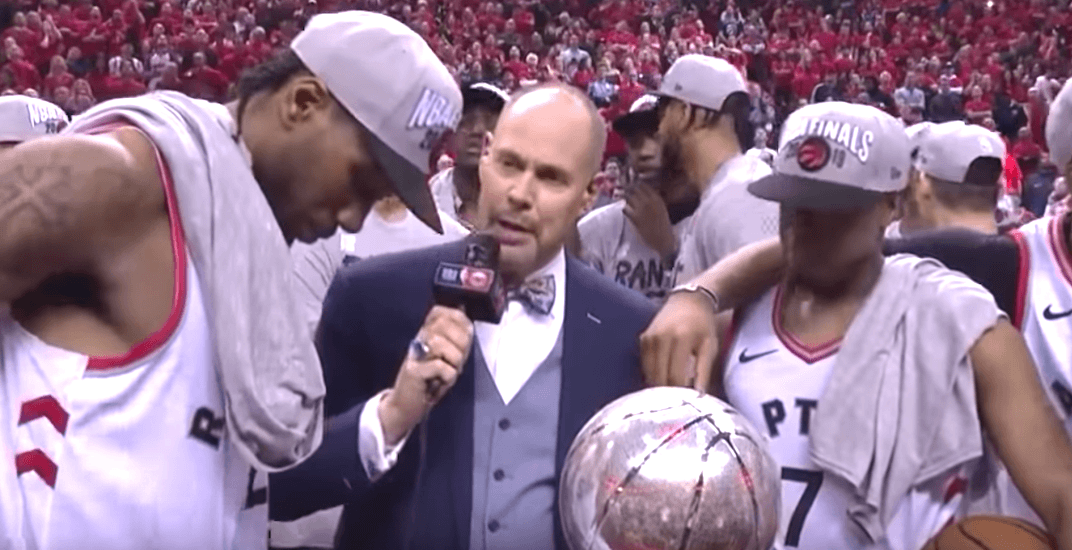 Heading into the NBA Finals, no player has had more to do with the success of his team than Kawhi Leonard.

Averaging 31.2 points, 7.3 rebounds, and 3.3 assists per game, Kawhi has been sensational during the postseason. He’s been a beast on the defensive end too, with the turning point of the Eastern Conference Finals coming when he began guarding Milwaukee Bucks superstar Giannis Antetokounmpo in Game 3.

But in the moments after the Toronto Raptors won the East Finals, Kawhi wasn’t taking any credit. In fact, he shined the spotlight on his teammates instead.

It’s something that we don’t always see with NBA superstars.

Asked by TNT’s Ernie Johnson what the mindset was when the Raptors were down 15 points late in the third quarter of Game 6, Kawhi used the word “we” eight times. He used the word “I” once, to reference when he was on the bench. He mentioned five teammates by name.

“We were here last game in the third quarter or fourth quarter, we just strived at it. We enjoyed the moment. We went out there and played hard every possession.

“My teammates had my back. I went on the bench to start the fourth quarter, they came back and made a run. Fred [VanVleet] hit big shots, Norm [Powell] hit big shots too. You saw K-Low [Kyle Lowry] hit two big threes back-to-back. Serge [Ibaka] rebounding, Marc [Gasol] hitting threes. It’s just a collective effort.

“That’s our mindset going in. Just playing hard each possession.”

And how about the situation he’s in, coming to a team that’s never been to the Finals?

“It’s still surreal to me right now. We just won Game 6. That’s what we’ve been striving for all season. Everybody here was saying ‘get to the Finals and win it.’ And it’s not over yet. We’re going to enjoy the win tonight, go in the locker room and see what we gotta do for the next team.”

Kawhi has to be considered the most humble superstar in the game.

Contrast Kawhi with LeBron James, who can’t say “I” enough in interviews, and it’s even more pronounced. LeBron is a lot of great things, including being charitable off the court, but humble isn’t one of them.

Remember when the Cavs won the NBA championship in 2016?

See if you can spot the difference when he answered this question from Doris Burke about the kind of character it required for a team with so many players playing in their first NBA Finals. Here’s the main part of his answer: