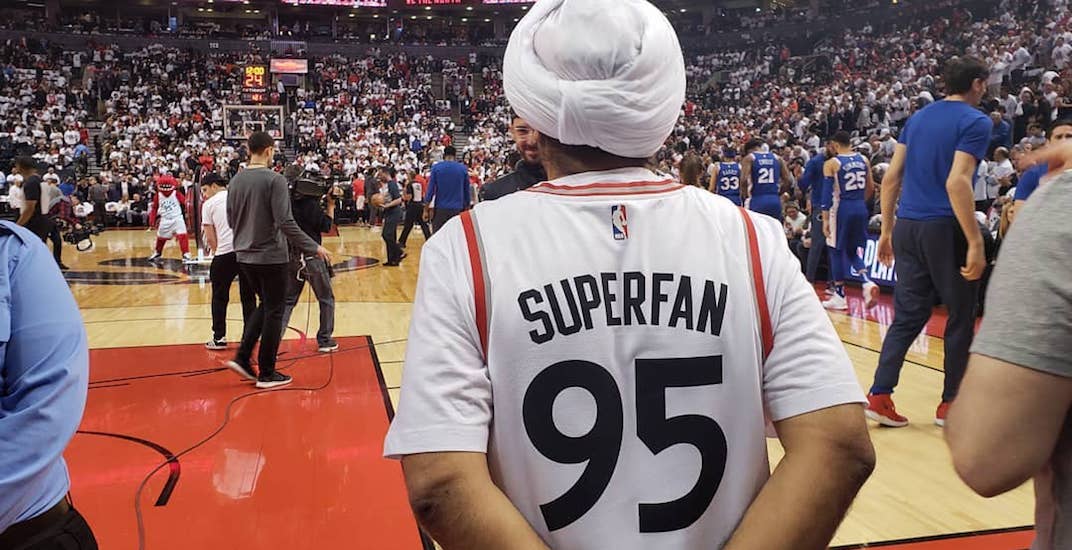 Drake gets the headlines, but Toronto Raptors supporters know who their most inspiring fan is.

It’s Nav Bhatia, AKA ‘Superfan,’ who hasn’t missed a Raptors home game since the team entered the league in 1995. He’s been to a bunch on the road as well.

Nav’s impossible to miss at games. Sitting courtside, he’s as enthusiastic as they come — and will do just about anything to throw off the other team when they attempt a free throw.

That’s what you see on TV. But what you may not know about Nav is the backstory of a 67-year-old who immigrated to Canada in the 1980s with very little money.

CNN reporter and Toronto native Muhammad Lila shared an incredible story about Nav in the form of a 15-tweet thread, about who he is and where he came from.

When you think of the Raps, you probably think of Drake on the sidelines, as the team’s biggest fan.

In Toronto, we love @Drake. But there’s someone else who symbolizes everything great about Toronto and Canada. pic.twitter.com/qWPCs5TRHK

He’s been at every single Raptors home game since 1995.

That' right: Every. Single. One.

Through Damon, Vince, CB4, a zillion coaches, blackouts, blizzards, you name it.

He sold 127 cars in just ninety days. It’s a record that stands to this day. He did it the old-fashioned way, by being honest (and yes, some catchy radio ads). He was so good that he eventually bought the dealership. Crazy, right.

If you go to a Raps game, you’ll see his big ass huge goofy smile, on the baseline.

When you’re an immigrant, nothing feels more Canadian than waving a Canadian flag while cheering your team. Sports is the great equalizer. pic.twitter.com/2S4pP1dZo8

You’ll hear a dozen languages, see black guys in dreads hanging out with Korean guys eating poutine. In other cities, that would be weird.

In Toronto, it’s perfectly normal. It’s how the 6ix rolls.

Take this pic. How many colors/ethnicities can you see? At least a dozen. pic.twitter.com/ni5zxD5SZu

A guy like @superfan_nav is our best symbol of that.

He’s not just a guy from Toronto. He *is* Toronto.

A place where people work hard, make it, and still care enough to give back. pic.twitter.com/K5do9KqjgE

Basketball can be more than just a game.

When the finals tip-off on Thursday, the world is going to see Toronto being Toronto: Diverse, strong, caring.

And there’ll be a 67-year old Sikh turbaned guy leading the charge.

And you know what, we're okay with that.

Just got off the phone with Nav. I asked him what he’d tell the world about Canada, he said:

“Other counties might be richer, but they’re not richer in mannerisms, politeness, or looking after each other.. And the country south of us has a lot to learn.”