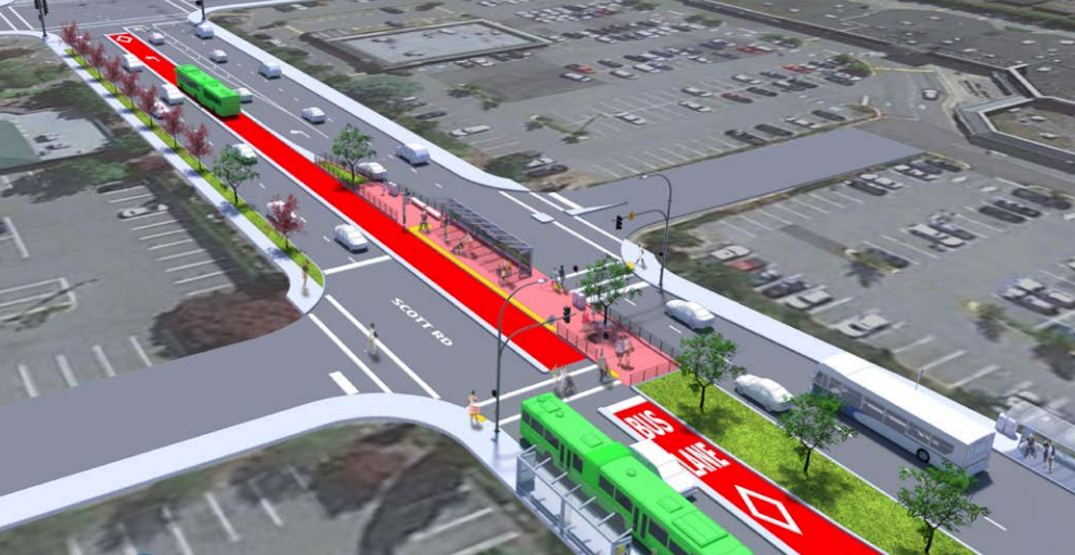 Artistic rendering of the southbound centre bus stop on Scott Road near 72 Avenue for the R6 Scott Road RapidBus. (TransLink)

Extensive road design changes on the border of Delta and Surrey are planned to speed up and enhance the reliability of the buses on TransLink’s future R6 Scott Road RapidBus route.

The public transit authority announced today it is gearing up the route for a late 2023 opening, running along a 12-km-long, L-shaped route between SkyTrain Scott Road Station to Newton Exchange via Scott Road and 72 Avenue.

This includes adding bus-priority lanes along Scott Road on both directions between the SkyTrain station and roughly 99 Avenue, and southbound only between 90 Avenue and 72 Avenue, as well as shorter segments along 72 Avenue. 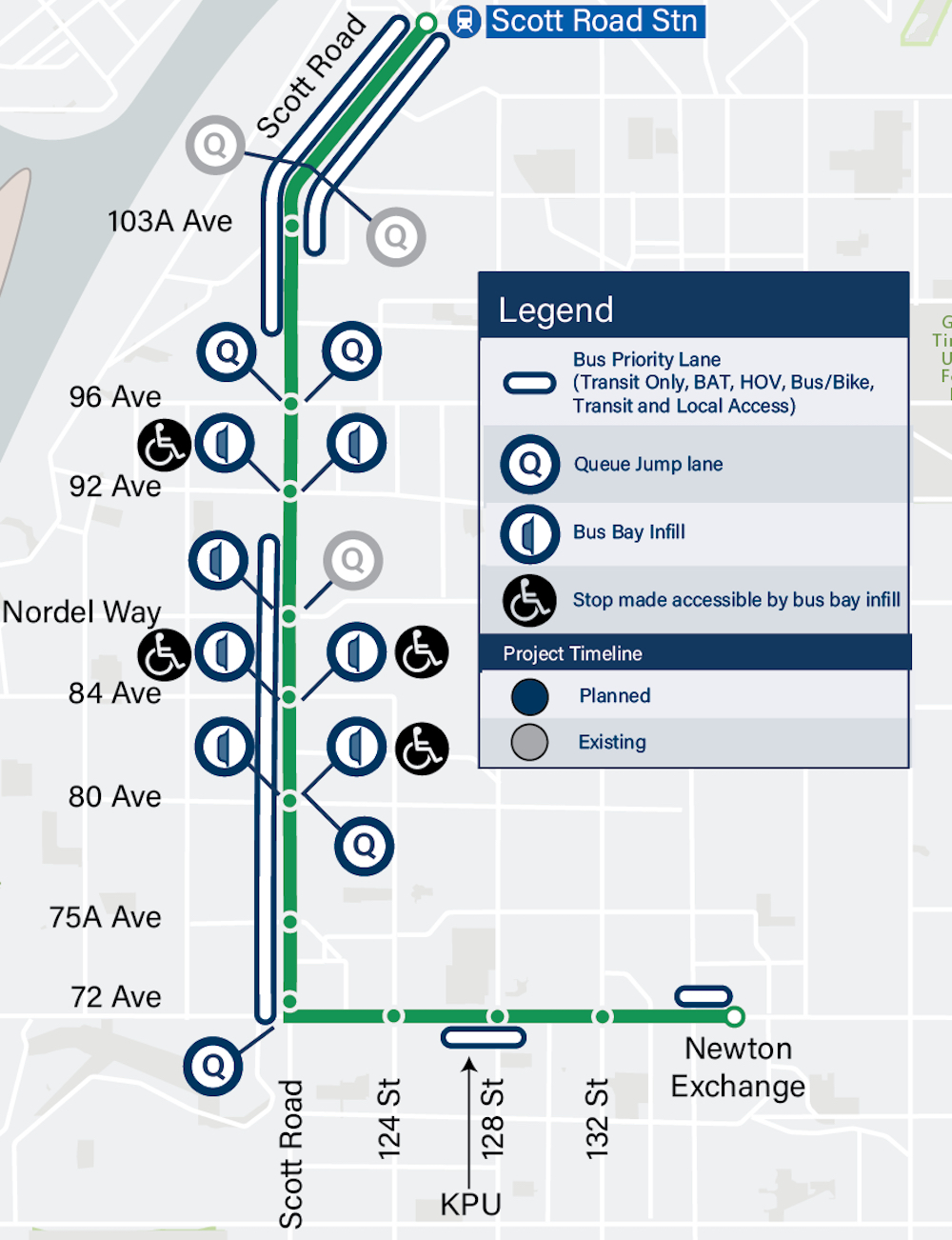 These lanes for buses are achieved by constructing additional lanes, repurposing existing lanes, and reducing the width of existing lanes. At least two general vehicle traffic lanes will be retained in each direction.

The most significant change is the construction of a median for an island bus hub on Scott Road’s southbound direction, with this stop serving Strawberry Hill Shopping Centre and Scottsdale Exchange. This centre-running stop is similar to the No. 3 Road bus lanes in Richmond in the 2000s, prior to the Canada Line. 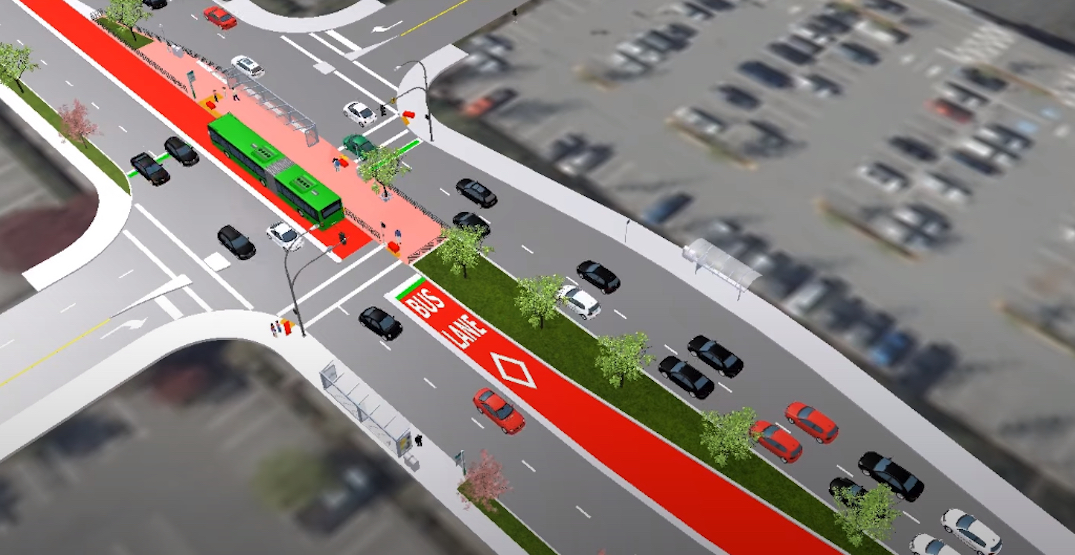 Artistic rendering of the southbound centre bus stop on Scott Road near 72 Avenue for the R6 Scott Road RapidBus. (TransLink)

“Surrey riders have already benefitted from previous RapidBus expansions on busy corridors and I have no doubt that additional routes, like this one for Scott Road, will be welcomed in our city,” said Surrey mayor Doug McCallum in a statement.

“Increasing access to faster, more frequent routes will have an immediate positive impact for the strong ridership we have in Surrey. I commend TransLink for continuing to invest in transit options for the fastest growing city in the province.”

Existing condition of the intersection of Scott Road and Old Yale Road: 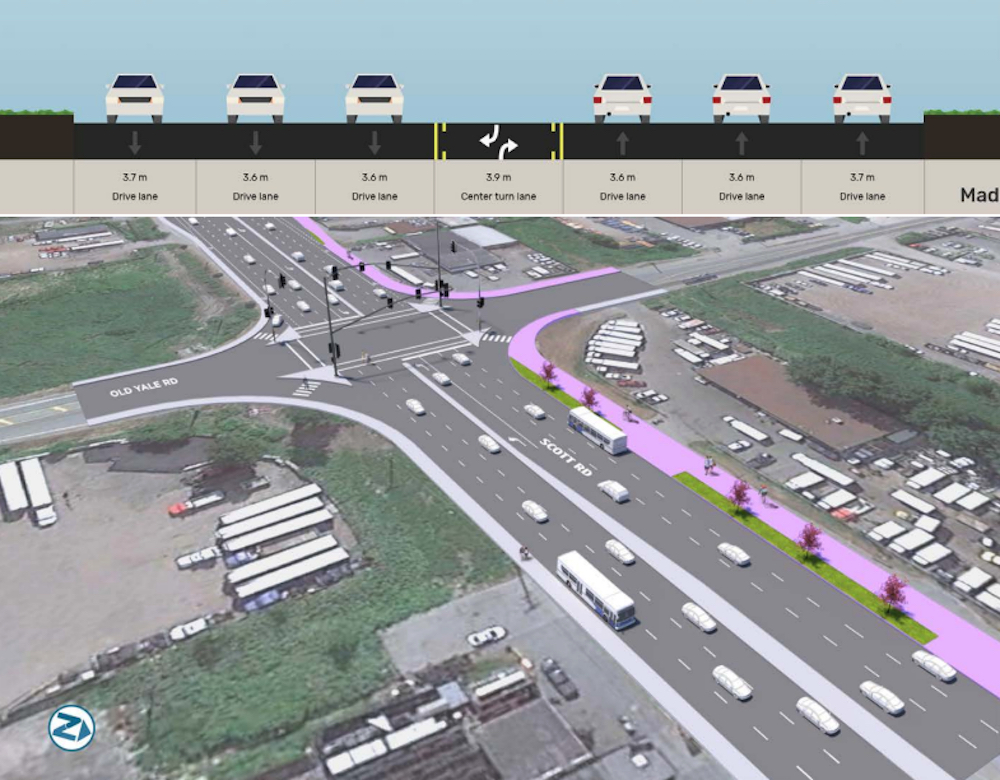 Existing condition of the intersection of Scott Road and Old Yale Road. (TransLink)

Future condition of the intersection of Scott Road and Old Yale Road: 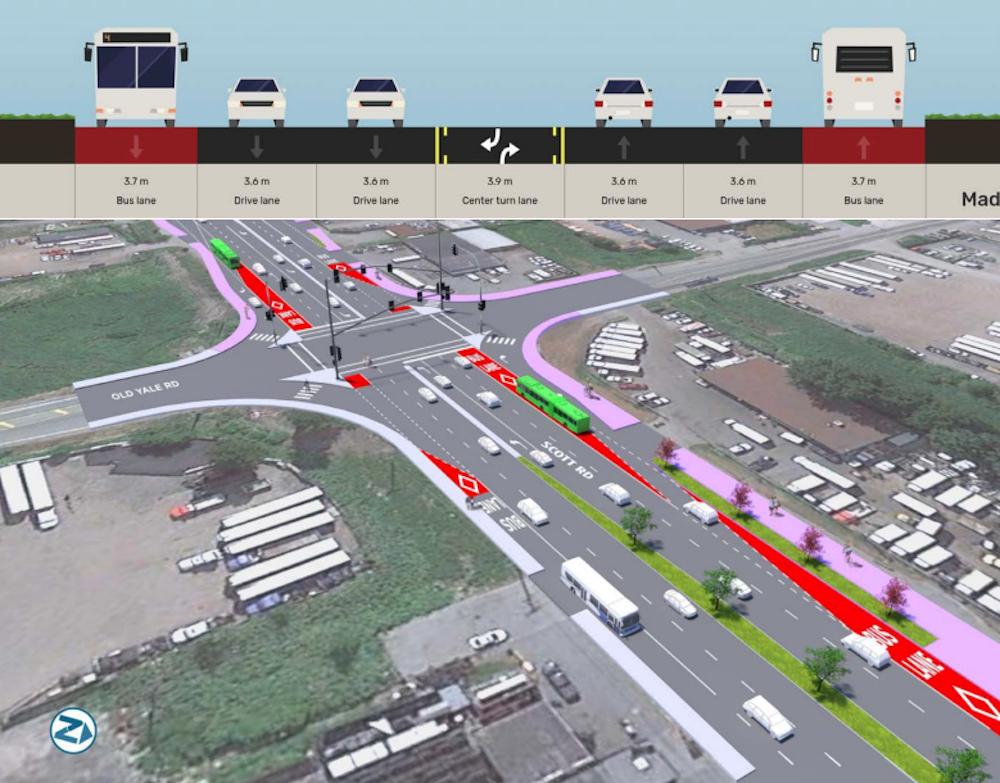 Future condition of the intersection of Scott Road and Old Yale Road for the R6 Scott Road RapidBus. (TransLink)

As a measure to reduce the frequency of vehicle collisions on Scott Road, a speed limit reduction is proposed from 60 km/hr to 50 km/hr.

According to TransLink, the changes are not expected to result in any significant changes in congestion, and the additional bus priority will help reduce congestion in certain areas.

Local residents and businesses are now being asked to provide their input on the proposed street changes, bus stop locations, and passenger amenities. An online survey is open until October 8, 2021.

With a stop at the intersection of 128 Street and 72 Avenue, this RapidBus will provide the adjacent Kwantlen Polytechnic University’s campus with significantly enhanced transit service. A total of 13 stops are proposed for the route.

Existing condition of 72 Avenue next to Kwantlen Polytechnic University: 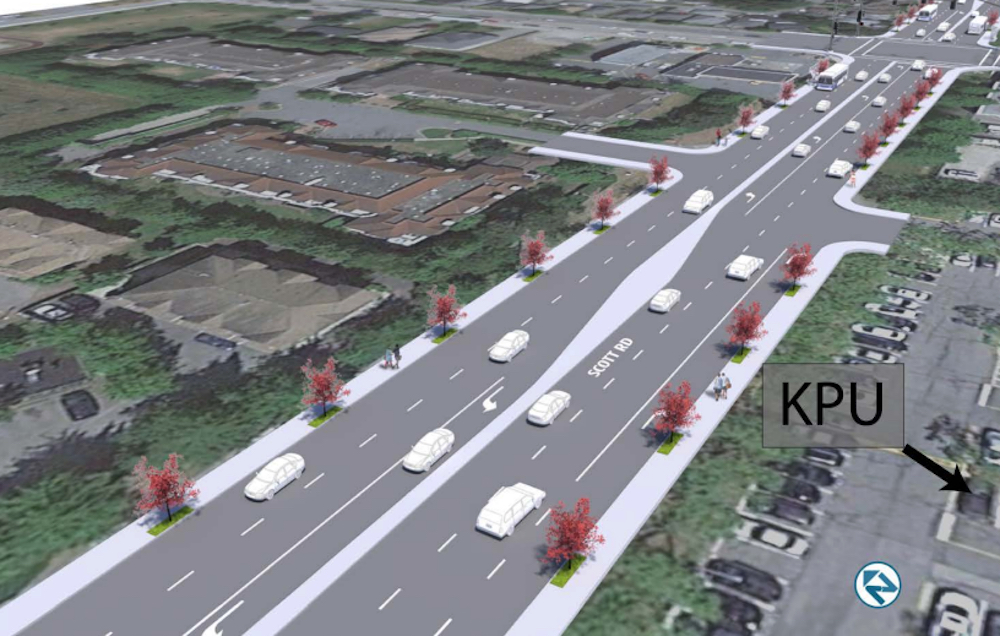 Existing condition of 72 Avenue next to Kwantlen Polytechnic University. (TransLink)

Future condition of 72 Avenue next to Kwantlen Polytechnic University: 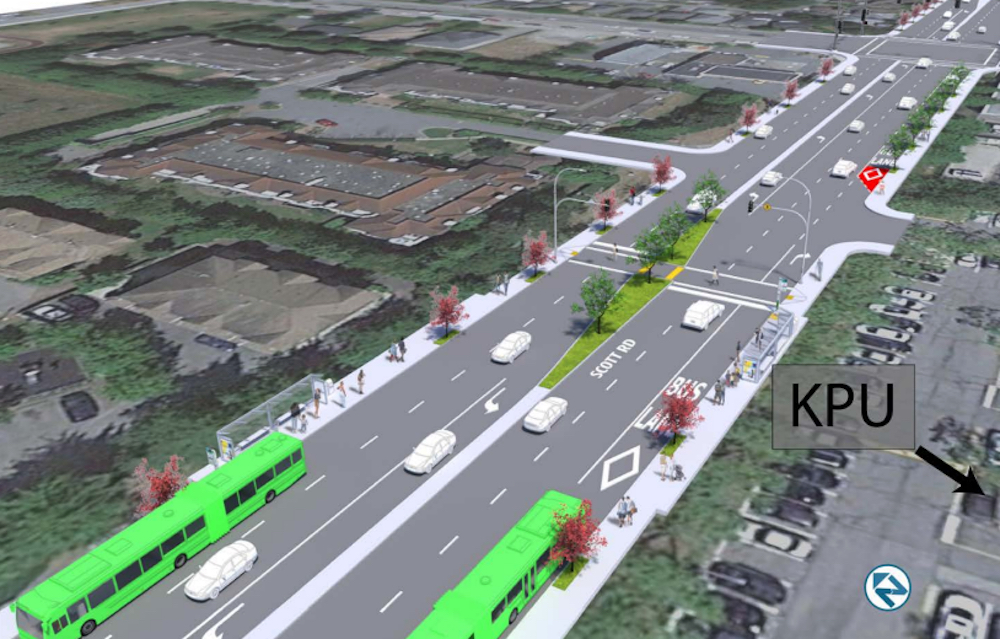 Future condition of 72 Avenue next to Kwantlen Polytechnic University for the 128 Street stop of the R6 Scott Road RapidBus. (TransLink)

Unlike the region’s first RapidBus routes, each stop along the R6 will include a shelter, specially sized for the needs of such an enhanced bus route, along with unique RapidBus wayfinding signage, digital real-time next bus display, and all-door boarding.

TransLink states there is a need for RapidBus along this corridor, made evident by the high ridership on the existing No. 319 Scott Road Station/Newton Exchange, which will be replicated in routing by the R6. The plan is to retain the No. 319 as a local service.

The R6 is estimated to achieve travel times that are 20% faster than the existing 50 minutes each way during peak hours on the No. 319.

“We’ve seen over many years that ridership is booming south of the Fraser. Ridership recovery in Surrey and Delta have been stronger than most other places in the region, and I’m excited to take this step towards faster, more reliable bus service for our customers in the area,” said Kevin Quinn, CEO of TransLink.