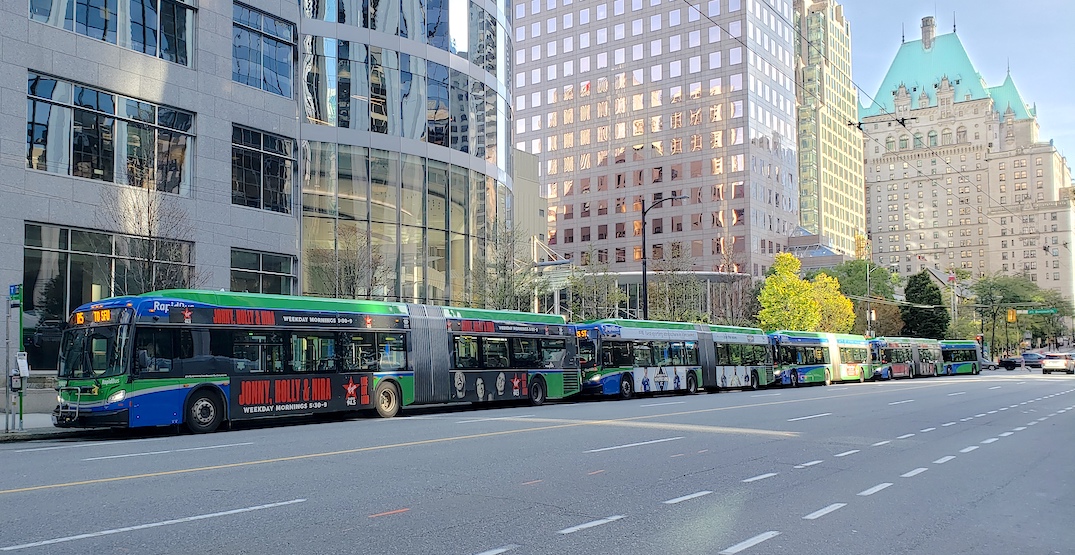 About 50% of TransLink’s entire bus fleet now has air conditioning, since this feature became a standard requirement for all new TransLink buses starting in 2012.

With existing buses aging and the need to procure additional vehicles for ongoing plans to expand services, this air-conditioned bus target is now expected to reach about 90% in 2026.

By 2028, 100% of the bus fleet will be air conditioned, providing passengers with greater comfort, especially for the increased frequency of hot summer weather events.

Air conditioning is a feature of the HVAC systems on the buses, but with climate control there are times when it seems that both the heat and cooling are on simultaneously, allowing for the dehumidification of the air on a cold or humid day.

Another 46 HandyDART vehicles will be replaced with a mix of Micro and Midi Buses, and 27 community shuttle buses will also be replaced.

TransLink is aiming to order its last diesel bus by 2023, with all future acquisitions thereafter being zero-emission vehicles, specifically focusing on electric-battery models.

By 2022, 15 new additional electric-battery buses at a cost of $16 million will arrive, allowing for the operation of TransLink’s first battery-only bus route — No. 100 from Marpole Loop in South Vancouver to 22nd Street Station in New Westminster.

TransLink is also planning to build a new major bus depot by 2024 on a vacant industrial site just west of the Canada Line bridge in Vancouver to accommodate a fleet of up to 300 electric-battery buses.

The public transit authority is hoping to proceed with a more ambitious plan of acquiring over 600 electric-battery buses over 10 years to replace the aging fleet, but this accelerated plan requires additional funding from senior governments, such as the federal government’s new $1.5 billion fund to assist public transit systems across the country transition to electric-battery buses.

TransLink’s existing trolley bus fleet, acquired in the mid-to-late 2000s, will be replaced with new trolley models towards the end of this decade. The existing trolleys are not equipped with air conditioning.

Additionally, the transition to new fare processing equipment onboard buses is now nearing completion. Old electronic fare boxes — discontinued by the supplier — are being removed and replaced by manual coin drop fare boxes, with bus drivers providing passengers paying in cash with a rip-off paper proof of payment. As of last month, about 1,200 out of the 1,500 conventional buses saw their fare equipment replaced, and the project is now on track to reach completion by the end of 2021.

Nearly all trips on the transit network are now being made through the Compass system.