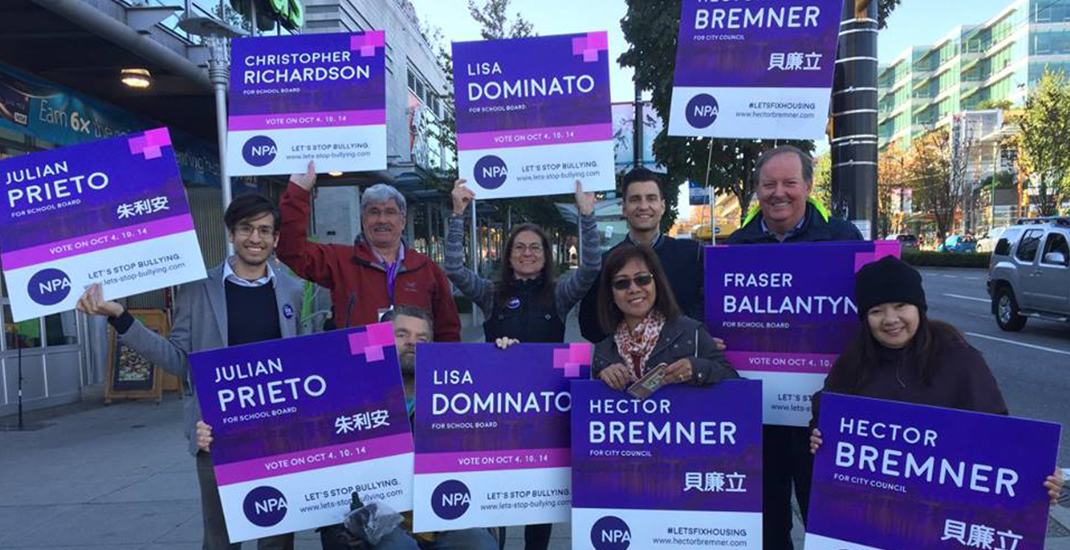 NPA candidates and members ahead of the October 14, 2017 by-election (Vancouver NPA/Facebook)

This hasn’t been the easiest of weeks for Vancouver’s Non-Partisan Association (NPA) party.

It began on Monday night, when the NPA’s Hector Bremner, who, after announcing in February that he was seeking the nomination of the NPA,  said his bid was rejected by the party’s board.

Since then, others who were running under the NPA banner have since decided not to, or are having serious second thoughts about their plan.

Crook, who runs a mobile video game design consulting business and is behind the ‘5 Kids 1 Condo’ blog, which details his life as a single parent of five young kids renting a 1,000-sq-ft condo in downtown Vancouver, announced earlier this year he would seeking seeking the nomination of the NPA to run for City Council.

However, it appears that has now changed.

In a statement this week, Crook said that even before he announced his candidacy, he was aware that “returning the NPA to a progressive model of civi leadership was ambitious and resisted by the party’s old guard.”

However, with Bremner ousted by NPA, “the likely NPA Mayoral candidate is no longer someone I support as a progressive, pro-housing candidate.”

And it’s for this reason, he said, that “I won’t be seeking an NPA nomination.”

Hey @NPAVancouver – I’ve been asked by numerous people how they can cancel their NPA membership.

There doesn’t appear to be an online way to do this.

What email should they write to?

Baker tweeted back, but his response took a different turn.

A. Crook, we happily accept your request to be removed from the @NPAVancouver membership.

The NPA party president’s tweet prompted a litany of responses, with many asking that their membership be cancelled as well.

Cancel mine too, thanks Baker! My swing vote is going elsewhere. Would love a refund, too.

Yep, cancel mine too please!

Cancel my membership too please.

Please cancel my membership too! Happy to be removed.

For his part, Crook responded that Baker hadn’t actually answered his original question.

Hmm, not what I asked, Greg.

But for those not fortunate enough to have the @NPAVancouver President gleefully tear up their membership without being asked, how might they cancel?

Still waiting on that answer… https://t.co/k1u75gCDtI

But Crook and Bremner aren’t the only ones voluntarily and involuntarily cutting ties with the party.

While his original plan was to seek a nomination for City Council with the NPA, Scott de Lange Boom said in a statement that this is no longer the case for him either.

For those who may have missed it, I am no longer seeking a nomination with the NPA. #vanpoli https://t.co/hPgfiNouB4

“I decided to seek the NPA nomination… because the party ran a bold, pro housing campaign during the 2017 byelection,”he said. “I had high hopes that the NPA was the party to lead Vancouver through the reforms necessary to make Vancouver an inclusive and affordable 21st century city.”

During the campaign thus far, he added, “I have met hundreds of engaged and excited Vancouverites who are passionate about solving the city’s problems.”

And while he said that at first it seemed like the NPA would live up to its name, “recent events cast doubt on that.”

The NPA decision on Monday, which “disregarded the recommendations of their own green  light committee… raises serious concerns about the openness, transparency, and fairness of nomination process.”

Finally, he said, the party “promised an open and transparent nomination process and has delivered the opposite.”

Asked what his plans are now, moving forward, de Lange Boom, said he’s still deciding what the next step is, but that running as an independent is “one option I am considering.”

NPA candidate Julian Preito said he “strongly disagreed” with the party’s decision to block Bremner’s candidacy, and as a result he would not seek an NPA nomination either, but would do his best to “build bridges and common ground.”

On Facebook, Prieto said the party’s “self mutilation” could result in voters finding “a former free enterprise coalition diluted into fragmented phantoms of what could have been.”

The NPA, he added, “will lose a strong energetic warrior, and its next leader will have a weakened mandate with only half the membership.”

Prieto thanked the “many” volunteers, friends and citizens, who supported him, “as well as those with different views.”

On its website, the NPA said that on May 7, its board of directors received recommendations from the Board’s Green Light Committee regarding the five prospective NPA mayoral candidate applicants.

“The NPA Board considered the Committee’s recommendations for each candidate and voted to approve three of the five candidates and for their names to be put to a vote of the NPA membership at the NPA’s mayoral nomination,” the statement read.

“The three approved candidates are Glen Chernen, John Coupar, and Ken Sim (in alphabetical order). The NPA Board chose not to approve the mayoral applications of Hector Bremner and George Steeves.”

The NPA’s mayoral nomination meeting takes place on May 29.

Vancouverites go to the polls on Saturday, October 20.