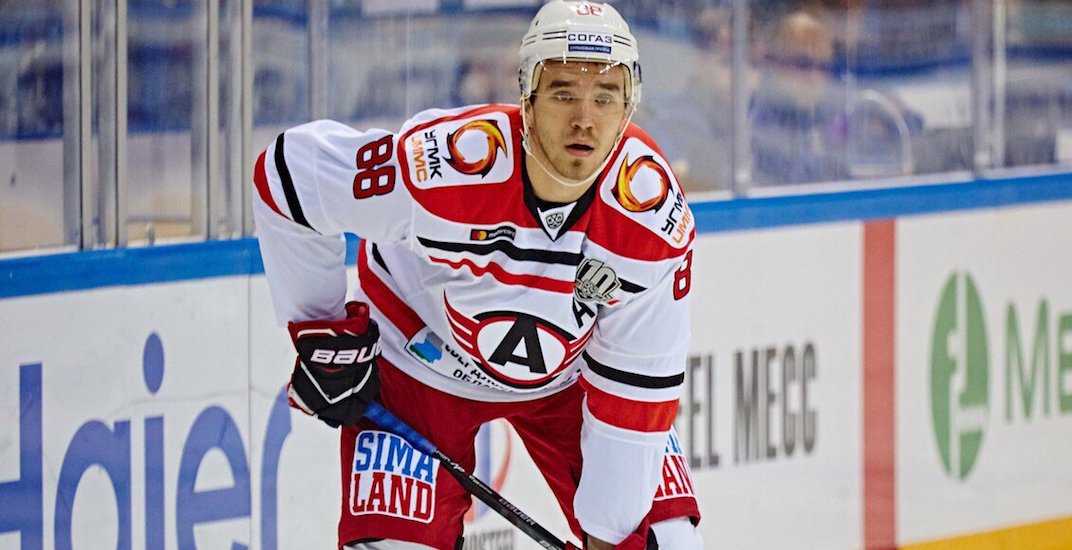 It sounds like Nikita Tryamkin wants to return to the NHL next season.

Two years ago, that would have been cause for celebration in the streets of Vancouver, as the Canucks still own his NHL rights. Fans still had Zdeno Chara dreams dancing in their heads back then.

But now? Well, there’s certainly some debate as to where Tryamkin would fit in.

It’s been almost three years since Tryamkin, who turns 26 in August, bolted back to Russia. He was a restricted free agent, so that was his right, but it left Canucks fans disappointed that the 6’8″ defenceman wouldn’t realize his potential in Vancouver.

Tryamkin’s KHL contract with his hometown team, Avtomobilist Yekaterinburg, is set to expire on April 30. That’s after the last game of the regular season, and he wouldn’t be eligible to play in the playoffs, so the soonest Tryamkin could return is at the start of the 2020-21 season.

“I postponed the issue of my contract until the end of the season,” Tryamkin told a Russian news outlet this weekend.

Agent Todd Diamond on #TSN1040 Rinkwide on Nikita Tryamkin : "It's very much on the table, the goal and desire is to sign in Vancouver, that's what we have had discussions about."

“It’s very much on the table,” Tryamkin’s agent Todd Diamond said in an interview with Andrew Wadden and Rick Dhaliwal on TSN 1040, referring to a potential return to the Canucks. “Our approach is basically we don’t want to interfere with his Russian season, out of respect for him playing well and out of respect for the team trying to accomplish their goals of having a good playoff run.

“The Russian season ends plenty enough early that we’ll have plenty of time to engage with the Canucks and see if we can work something out that’s suitable for all parties.”

The fact that Tryamkin hasn’t signed a contract extension to stay in Russia yet should be encouraging for the Canucks, though the big blueliner could also be using the lure of the NHL as leverage in negotiations.

If you take his agent at his word, that doesn’t appear to be the case in this instance though.

“That is his goal, his desire,” Diamond said of Tryamkin’s interest in returning to the NHL. “The team that he left and the team that he would come back to are much different. Things seem to be headed in the right direction. There’s a lot more talent to work with. I think that would allow Nikita to play his game and not feeling burdened by trying to do too much offensively.”

Indeed, a lot has changed since Tryamkin left town. Just nine players remain from the Canucks team Tryamkin last played on. He would also get a fresh start with a new head coach, as Tryamkin didn’t appear to enjoy playing for Willie Desjardins.

Tryamkin has consistently said that he’s open to returning to the Canucks, admitting exactly that to Daily Hive back in 2018. And for what it’s worth, his social media accounts still feature him in a Canucks jersey.

Do the Canucks have a spot for Tryamkin?

The other side of the coin is the Canucks are no longer in a position where they can gift a spot in the lineup to an unknown quantity like Tryamkin. Just what Jim Benning will be willing to pay Tryamkin will be interesting to see, especially with the Canucks’ issues pertaining to the salary cap.

“We’d love to have him back,” Benning told Sportsnet 650 last June. “As we’re watching the Stanley Cup playoffs and we’re seeing size and strength of St Louis’ defence, he could be a big part of our group and he’s a young player.”

But counting on Tryamkin to replace a player like Chris Tanev, or Troy Stecher for that matter, would be an enormous leap of faith.

By Tryamkin’s agent’s own admission, he’s had an “up and down” year in Russia this season.

Tryamkin racked up the accolades upon his return to his home country in 2017-18, being named to the KHL First All-Star Team and suiting up for Russia at the IIHF World Championships.

But while Tryamkin appeared in the KHL All-Star Game in 2018 and 2019, the 2020 event took place this weekend without the big blueliner.

It’s also important to keep in mind that success in the KHL doesn’t always translate to the NHL, as many players have demonstrated. For example, Nikita Zaitsev was a KHL First Team All-Star in back-to-back seasons at age 24 and 25, but has mixed results in the NHL.

“He’s not going to be Quinn Hughes, but he certainly has the ability to affect the outcome of a game when he wants to — and that’s by using his size and his physical ability to create more space for his teammates,” his agent added. “This type of player can play for any team in the league.”

Perhaps Tryamkin would be better suited on another NHL team — one with cap space and the ability to experiment more than the Canucks. His stock isn’t exactly sky high, but Tryamkin could be trade bait for some immediate help for the Canucks before the February 24 deadline.

It’s all going to boil down to what Tryamkin is willing to sign for, and how much the Canucks believe in him. We should find out the answer to both questions in the coming months.