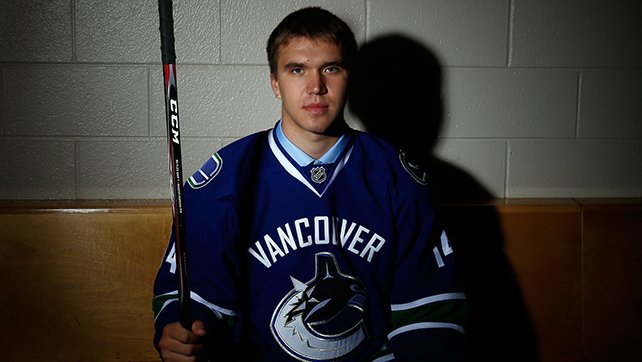 In a shocking development for Canucks fans, Nikita Tryamkin has signed a contract with Yekaterinburg Automobilist of the KHL, it was announced on Thursday.

Defenseman Nikita Tryamkin returns to @IHCAvtomobilist after one full season with @Canucks in NHL. pic.twitter.com/3kJRLpvc0i

The 22-year-old returns to the KHL with the same team he played four seasons with prior to making the move to Vancouver in March of last year.

Tryamkin found his stride with the Canucks last season, showing the kind of promise that gave people hope that the big Russian blueliner would soon become a top-four defenceman for years to come. His size is obvious, but when you consider his skating, decision-making, and mean-streak, you can’t help but think the 2014 third-round pick has a chance to become Zdeno Chara 2.0.

The Canucks will retain Tryamkin’s NHL rights, but there is no guarantee he will ever return. That’s the scary part.

For now, we don’t know the reason for Tryamkin’s departure, although family concerns are likely in the mix for the native of Yekaterinburg. As with any player, money could also be a factor.

Tryamkin was coy when asked about his contract status (he was set to become an RFA) and the possibility of returning to the KHL at the Canucks season-ending media availability.

“My contract is over, but it’s not yet determined where and what, but my interest is to play here,” Tryamkin said, through a translator.

A Russian-language interview appears to suggest that ice time was part of Tryamkin’s reasoning for leaving.

Here’s the exchange, with the help of Google Translate:

INTERVIEWER: At one of the recent press conferences, you said that “they just wanted to play hockey.” Your transition to “Motorist” is associated with the desire to get more gaming practice?

TRYAMKIN: Yes. During the season I was not happy with some matches. Sometimes I just did not understand – why? I could play 20 minutes, I could play 16, I could play 12. And on what it depended, I did not understand. So, having arrived in the “Motorist”, I continue to work. I have gained colossal experience both in the hall and on the ice. I want to improve. And, as I said, I do not think this is a step back.

Tryamkin averaged just 16:44 of ice time last season, ranking him seventh among Canucks defencemen. That could change next season given that the Canucks fired Willie Desjardins, but a new coach always comes with uncertainty.

Whatever the case, this throws a wrench into plans for the Canucks. They’d like to continue on with Tryamkin in their plans on the back-end, but if they don’t know if he’ll ever return, that becomes rather difficult.