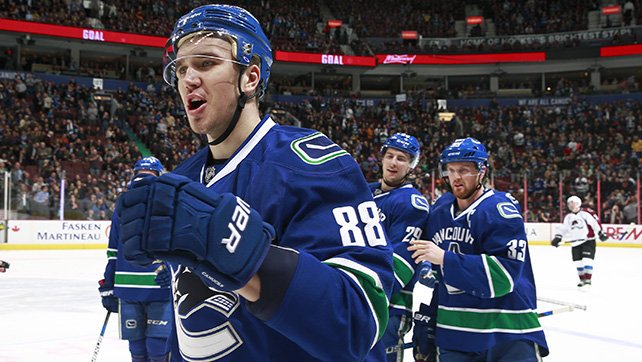 When Nikita Tryamkin chose to leave the Canucks following the 2016-17 season – his first full year in Vancouver – he surprised many fans and left them with the uncertainty that he’d ever return again. A 6-foot-7, 265-pound defenceman who combines bone-crushing hits with promising skating and puck-handling skills, he quickly became a fan favourite despite playing a limited role with the team.

That limited role was part of the reason why he decided to return to Russia, to play with his hometown club Automobilist Yekaterinburg in the KHL.

“The lack of ice time is the reason I decided to leave the Canucks,” Tryamkin told Daily Hive via email. Tryamkin received just 16:44 of ice time in 66 games under former head coach Willie Desjardins.

“I was a first-pairing D-man in Yekaterinburg this season, so I was pretty happy there.”

With added responsibility and trust from Yekaterinburg’s coaching staff, the blueliner took a big step forward. He recorded nine goals and 25 points in 51 KHL games, making an impact at both ends of the ice.

Following the season, the towering blueliner suited up for Team Russia at the IIHF World Championships in Denmark.

Tryamkin, though, says he still sees room for improvement.

“I think the season was good,” he reflected. “I’d say it was a ‘B’, not an ‘A’ mark. I didn’t play very well at the end of the season, but I worked hard every day and did all my best.

“I work hard each and every day trying to get better and better in every aspect.”

Despite his focus on the season in Russia, Tryamkin didn’t forget about the club that owns his NHL rights. In fact, he kept a close eye on the Canucks throughout the year.

“I looked after the Canucks’ games all season,” Tryamkin said. “It was easy because of the time difference – 12 hours from Vancouver to Yekaterinburg. I can wake up and watch the games or highlights.

This begs the question: is he eyeing a return to the NHL?

“Would I like to come back? Why not,” Tryamkin said about his future plans. “It depends on many factors.”

The most obvious factor is his contract situation. The 23-year-old still has two years remaining on a three-year deal he signed with Yekaterinburg, and without a transfer agreement between the NHL and KHL – like what exists in other European leagues – he is obliged to fulfil his contract.

That leaves the option of a return for the 2020-21 NHL season, but Tryamkin isn’t willing to jump back into the same situation that he left a year ago.

“Would I be needed by the Canucks after two years when my contract will expire?”

With the Canucks stuck in the middle of a rebuild, it’s extremely difficult to predict what the roster will look like two years down the road. However, the club has been searching for long-term solutions on the blue line for years. And with the decline of Ben Hutton, an aging Alex Edler, and Chris Tanev potentially on the trade block, Tryamkin could quickly establish himself as a top-four defenceman.

He’s willing to give the NHL another try. It’ll be up to the Canucks to show him he’s wanted.