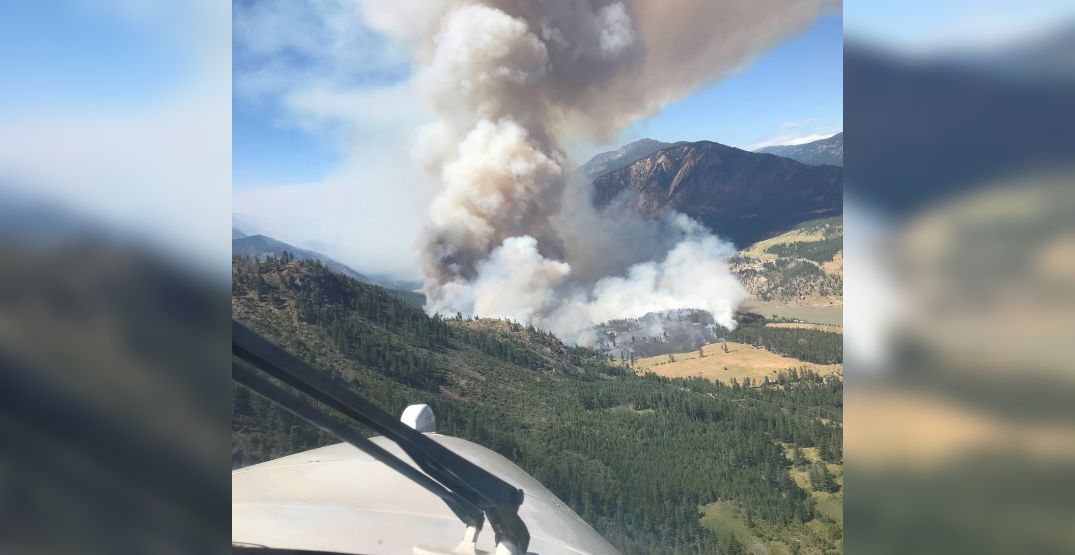 A growing wildfire near Lytton, BC has forced some residents to evacuate — just over a year after another wildfire ravaged the community and destroyed most of the town.

An evacuation order an alert have been issued for the Nohomin Creek wildfire, which is an estimated 800 hectares big as of Friday at noon. The wildfire is located about 1.7 kilometers northwest of wetlands on the west side of the Fraser River.

“At this time it is not posing a threat to Lytton as it is moving away from the town,” Katrine Conroy, Minister of Forests, said during a news conference Friday. “The fire is classified as ‘out of control’ which is a technical term used nationally that means the fires continue to spread, which means our BC Wildfire Service crews are fighting with aggressive suppression and control tactics.”

UPDATE: The #BCWildfire Service continues to respond to the Nohomin Creek wildfire (K70580). The fire has grown to 75 hectares and is now a Wildfire of Note. Lytton First Nation has implemented an Evacuation Alert and Evacuation Order for some areas. pic.twitter.com/acZpTJBolb

She added that overnight the fire made its way over the Fraser River but fire crews were able to contain it and stop the spread on that side of the river.

An evacuation order for about 24 properties northwest of Lytton on the west side of the Fraser River was issued by the First Nation and Thompson-Nicola Regional District Emergency Operations Centre.

“Individuals who are evacuating should take Spencer Road North to Lillooet for emergency egress. The route south to Boston Bar on the west side of the Fraser River has been compromised due to the spring freshet, and the Lytton Ferry remains out of service due to high water,” TNRD said in a statement.

The TNRD Emergency Operations Centre has issued an Evacuation Order for approximately 24 addressed properties northwest of Lytton on the west side of the Fraser River, due to the Nohomin Creek wildfire.

Just over 30 properties “north of Lytton along Hwy 12, as well as all properties on the west side of the Fraser River and north of Stein River to the Squamish Lillooet Regional District (SLRD) border,” are under alert.

The TNRD Emergency Operation Centre has issued an Evacuation Alert for approximately 31 addressed properties due to the Nohomin Creek wildfire.

Minister of Public Safety and Solicitor General, Mike Farnworth, is pleading for those under evacuation order to leave immediately.

He adds that Emergency Management BC and nearby communities are supporting displaced residents with emergency support services. Access to food, lodging and clothing will be provided until the evacuation orders have been rescinded.

On Thursday, TELUS told the province a widespread cell phone and landline reception outage was impacting the Boston Bar to Spencer Bridge areas. Lines cell towers and landlines were restored as of 4:30 am Friday.

“The outage was not related to the fire. At this time, again, we’re asking residents to continuously check for updates from their first nation, local government, the province and media as this situation evolves,” Farnworth said.

Lytton First Nation Deputy Chief John Haugen ensured, “We pretty much contacted everyone” despite the outage.

The province said about 321 person unit crews, and three initial attack crews on site are being supported by six helicopters, three air tankers and the bird dog plane, which is a small plane that coordinates all the firefighting activities for the air.

In total 80 personnel are on site including other operational and support personnel.

Access to the fire, weather conditions and terrain has proved to be a challenge, Farnworth said and Conroy added, heavy smoke accessibility is presenting challenges for crews.

Haugen added six and upwards of nine residential buildings have been lost so far.

“We’re working with trying to contact those community members that have lost homes,” he said.

There have been no reported injuries.

So far, there are 19 fires burning throughout the province. In comparison, Conroy said on this day last year there were a recorded 309 active wildfires.

“As we move into the second half of July and into August we will begin to experience more typical winter weather. The heat will increase wildfire risk and we can be seeing more fire on the landscape in the coming weeks. Be prepared, have a plan for wildfire and stay informed,” Conroy advised.

“And avoid all activity that may result in a wildfire,” Farnworth added.

Lytton made headlines around the world after breaking the all-time temperature record in Canada multiple times last summer.

Those temperatures served as the perfect storm for the devastating, deadly wildfires that destroyed nearly 90% of the town.

“I know that this is an extremely stressful and emotional situation as the community is still working towards rebuilding after last year’s devastating Lytton Creek fire. And I know that this has been challenging on BC Wildfire Service crews — many who responded to last year’s incident. I want to let you know that the province is here to support the Lytton First Nation and everyone affected by this fire,” Farnworth added.