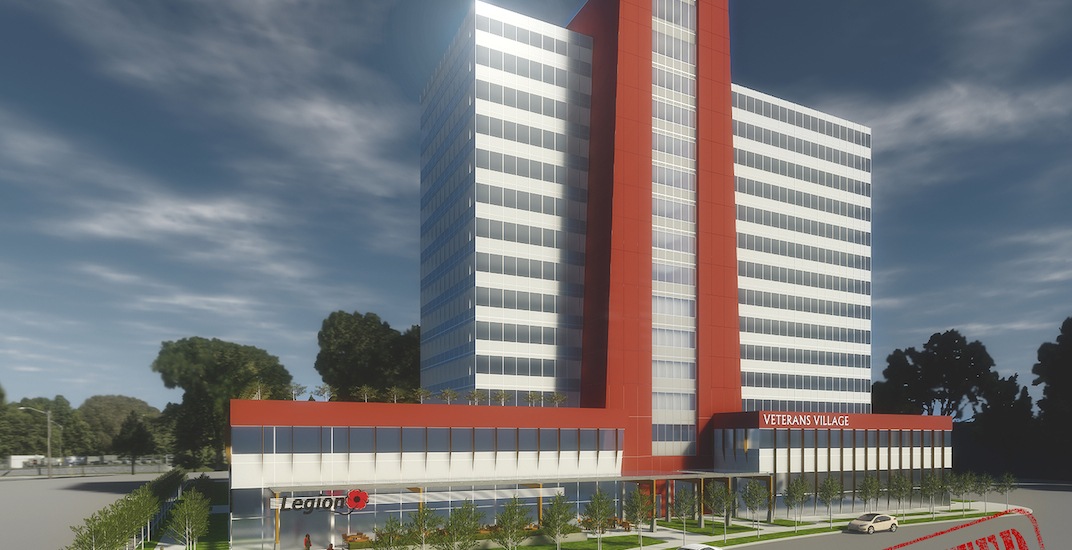 A proposed institutional development in Surrey City Centre, with an architectural design inspired by the Canadian National Vimy Ridge Memorial in France, is set to become the first of its kind in Canada – a centralized facility that provides physical rehabilitation, post-traumatic stress disorder (PTSD), and mental health treatment for veterans of the Canadian Armed Forces and first responders.

The Royal Canadian Legion BC/Yukon Command in partnership with local developer Lark Group have submitted an application to the City of Surrey to redevelop the current site of the Whalley Legion Branch 229 at 13525 106 Avenue into Legion Veterans Village.

The site is just south of SkyTrain’s Gateway Station and across the street from the BC Lions Training Centre. It is also on the southern end of the 135A Street Strip’s homeless tent city, but the project could become a catalyst for the area’s renewal and redevelopment. 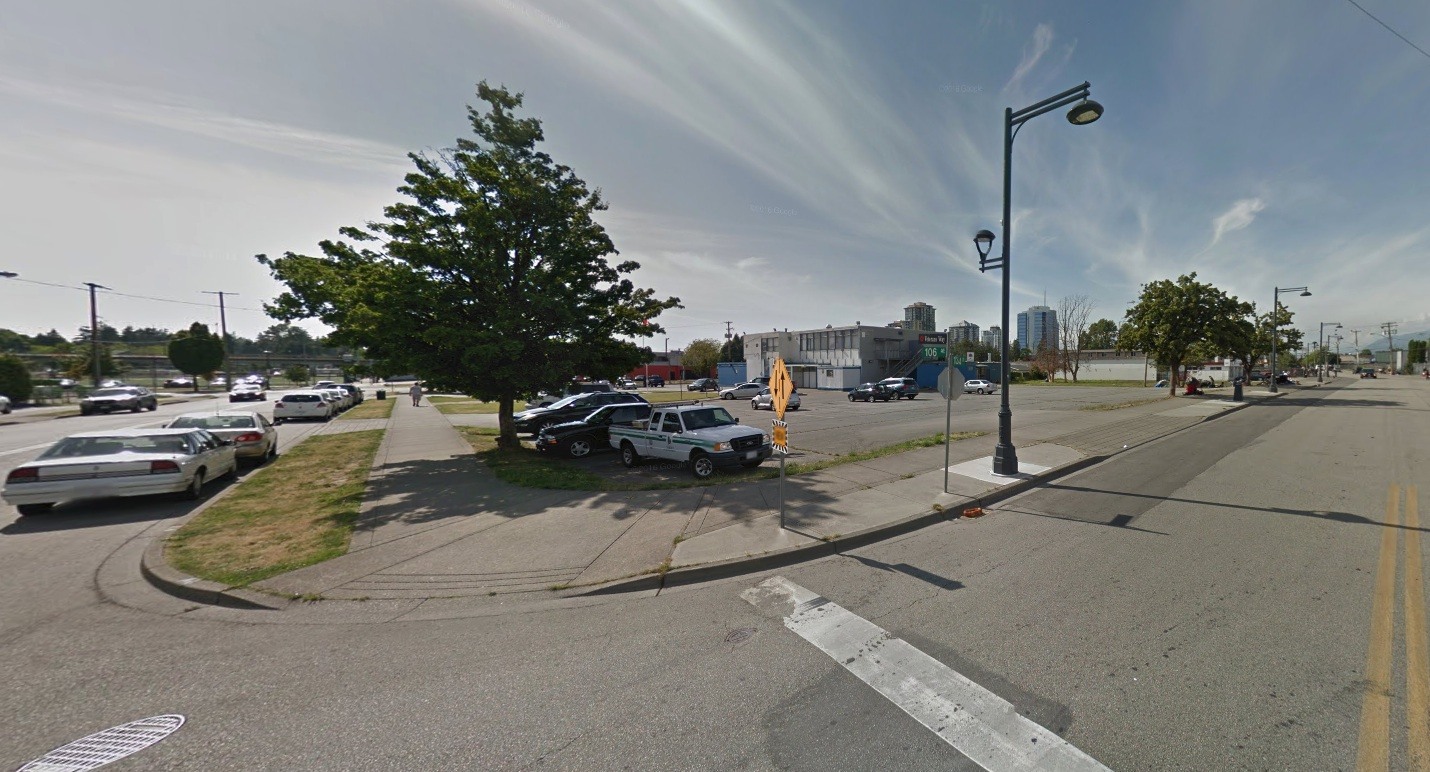 Whalley Legion Branch 229, the site of Legion Veterans Village, looking northwest from the corner of 106 Avenue and 135a Street. (Google Maps Streetview)

Legion Veterans Village’s Centre of Excellence in PTSD and Mental Health will provide PTSD and trauma counselling and research while the Innovation Centre for Rehabilitation will be a rehabilitation clinic with robotics and assistive devices for amputees. Work will be conducted to advance evidence-based services and programming in health, science, neuroscience, and engineering.

Various PTSD, mental health, mixed medical, and dental clinics will be found at the Village.

Additionally, the proposal calls for a new 10,000-sq-ft space for the Whalley Legion, with community and social lounge/dining space for members and their 150 cadets.

Another major component of the project is social and affordable housing for veterans, first responders, and seniors, including temporary transitional and crisis housing facilities.

Some retail and garden spaces will be located at the base of the building. 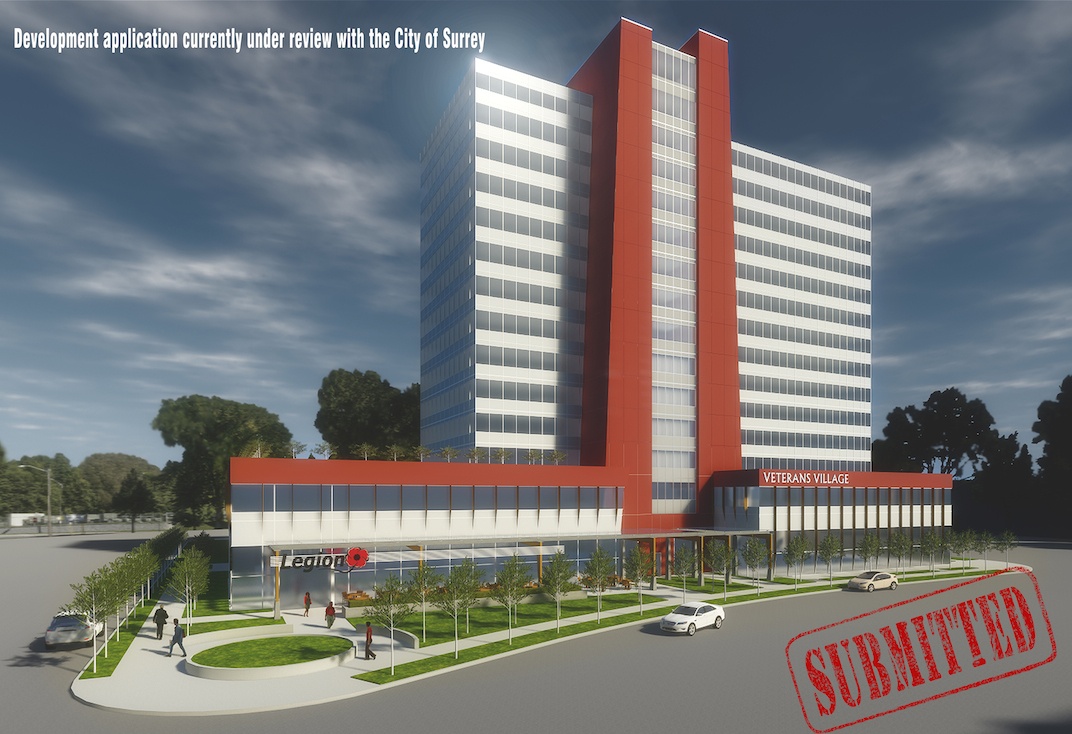 This phase of the Village is expected to cost about $60 million, and future phases could include more housing given the expansive size of the site. The Legion will own the land and most of the building, and various operators are expected to buy into the building, which will be operated as a strata title.

“We see this monumental building as the legacy of our Whalley branch into the future, as a cornerstone of the community where members and families go to socialize and bring together the neighbourhood,” Tony Moore, President of Whalley Legion Branch 229, told Daily Hive.

“Our vision for Legion Veterans Village is to change the current standards of care as a modern solution for veterans, first responders and citizens in the Canadian communities we serve.”

Rowena Rizzotti, VP of Healthcare & Innovations for Lark Group, added: “We began this project to specifically pull together these physical and mental health services, fill the gap in services, and improve services for veterans and their families all in one location, and hopefully create this as a model that can be replicated across Canada.”

Design scaled back to remain affordable

As for the building’s design, the latest architectural concept included in the proponents’ recent application to the City of Surrey is the project’s third design.

The project was first announced in 2015 as an ambitious, iconic two-building complex – 20 and 28 storeys – with a unique poppy pattern facade designed by Michael Green Architecture. 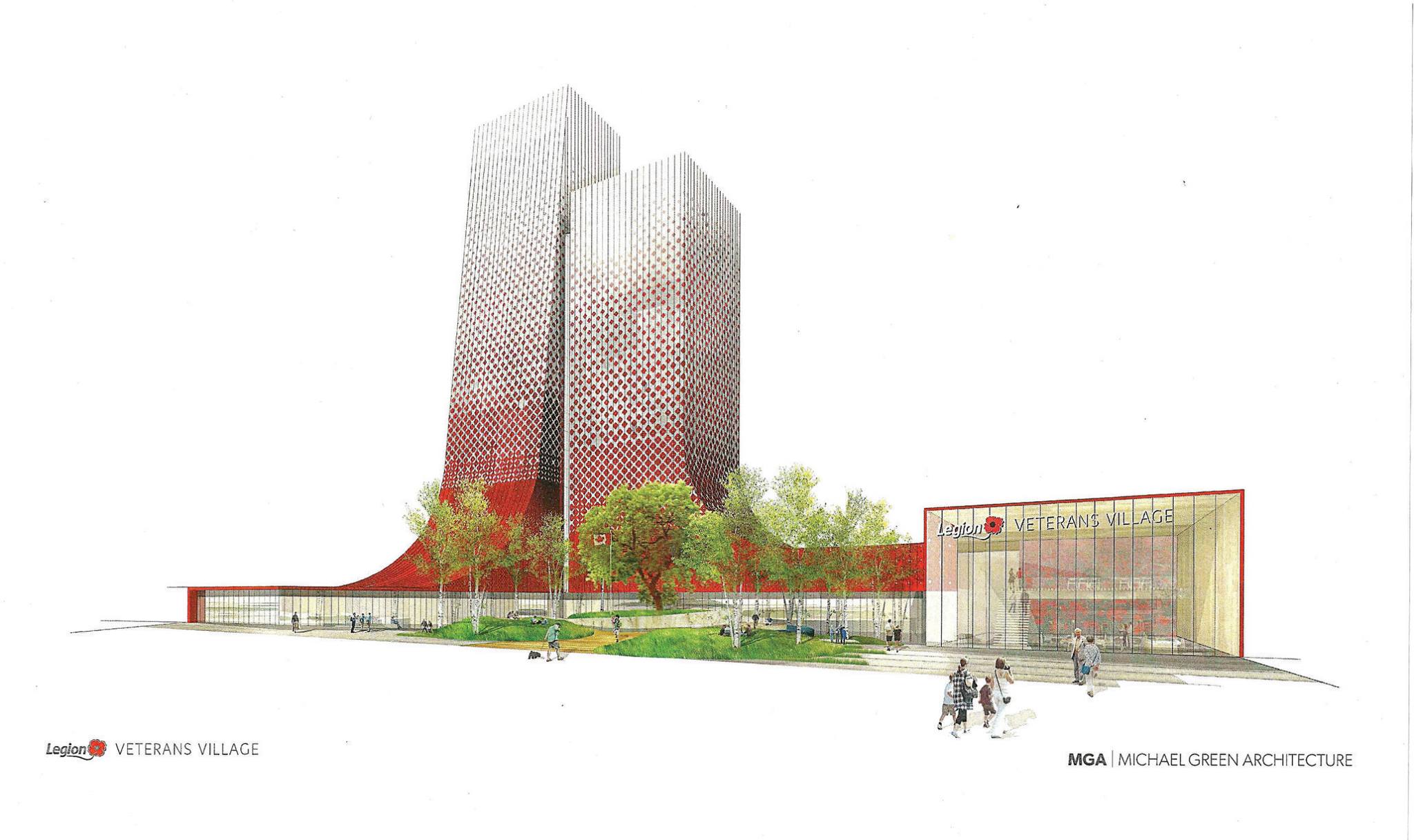 But a refined version of the project in November 2016 scaled back the design, removing the facade concept for a more standard design while retaining the scope and size of the complex. 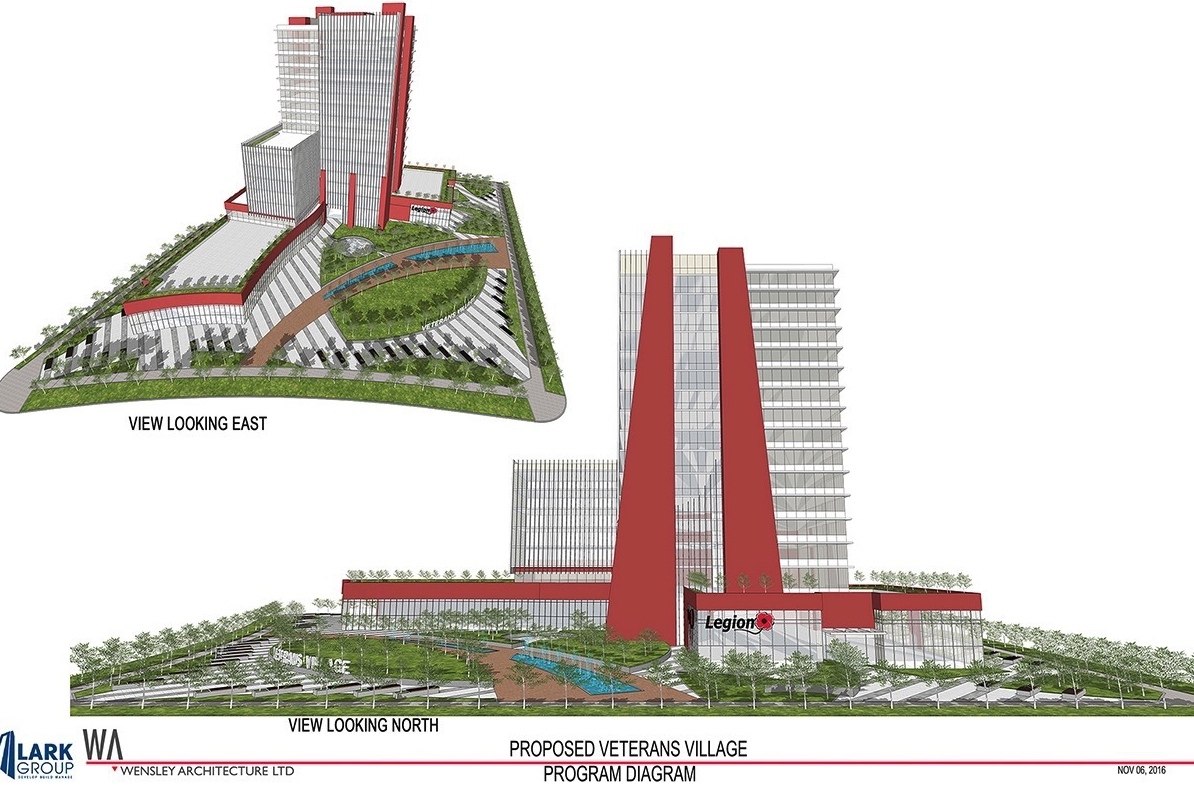 And the third and latest design, released this month, by Neil Banich of Wensley Architecture scales back both the size and the architectural concept even further.

Rizzotti says this was necessary to ensure the project remained affordable to not only build but also operate and maintain throughout its decades-long lifespan. Additionally, there is also an urgency to have the facility ready sooner than later to address the critical shortage in services for veterans, but a more complicated design would require more time to plan and build.

“If we had a building that was too expensive to support affordable housing and mixed-use clinics and different services for mental health, then it would have taken longer to create the building and given how important it was to the community, they really want to see it happen. So we tried to find the right balance in what could be affordable so that the clinics can continue to operate there and housing can afford in that community.”

Although the latest design is significantly scaled down from the initial design, Rizzotti maintains there is still an “absolute commitment to having that iconic Vimy Ridge look and feel to the building.” 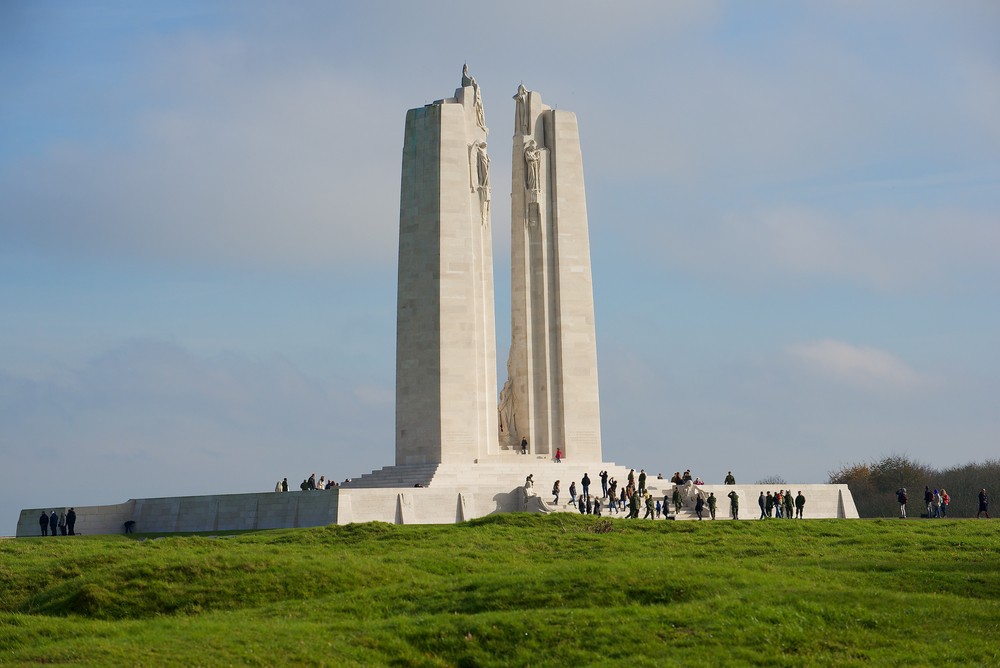 The Canadian National Vimy Ridge Memorial in France was built to honour the lives and sacrifices Canadians made during World War I. (Shutterstock)

The City of Surrey has deemed this project as a NEXUS project, which means the municipal government’s approval process for the proposal will be expedited. The first reading is currently scheduled for February 2018.

If all goes as planned with City approvals, construction could begin in spring or early-summer 2018 for a completion in 2020.