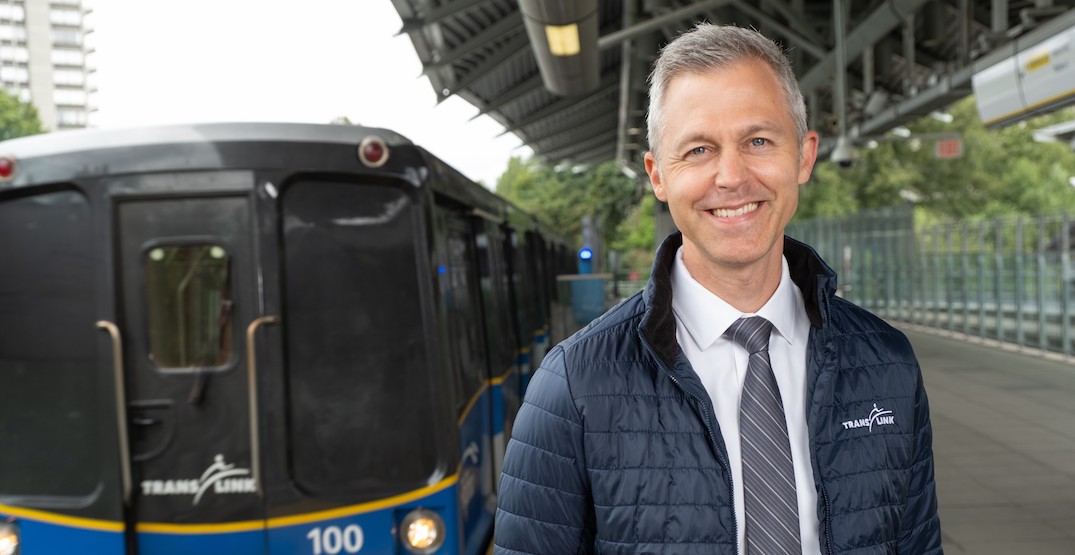 There is a new Kevin at the helm of Metro Vancouver’s public transit authority.

Over his first 16 days on the job, he met with mayors and other local leaders, toured depot and maintenance facilities, and met frontline staff on all the modes.

“I’m really excited to be here. At this point, I’m just learning a lot really fast. I’m really looking forward to meeting a lot of employees,” said Quinn during an interview with Daily Hive Urbanized on Tuesday.

“I come from a real strong philosophy that it’s our customers and employees who have the best ideas.”

He says he has an accessible, transparent, and “down to Earth” leadership style and believes it is important for the public to know how a public transit authority makes its decisions.

“I think transit agencies, in general, can be these black boxes of decision making, where people don’t know how decisions are made. It’s really important to me that people know how we make decisions, and we get feedback on those decisions. I think being accessible and transparent is going to be really important,” he said.

Quinn arrived in Metro Vancouver after spending over six years with the Maryland Transit Administration (MTA), located in the Baltimore-Washington DC region, one of the US’s largest multi-modal public transit authorities.

He previously visited Vancouver in Fall 2019, when TransLink was the host of the major Railvolution public transit conference, which showcased the region’s public transit network to North America’s public transit leaders both in the public and private sectors.

“I’m coming from the CEO role on the MTA, which has a very similar model profile to TransLink in terms of buses, rail, commuter rail, and accessible transit. It’s a very similar suite of modes,” said Quinn.

“I also want to say that TransLink is very well respected throughout the transit industry, and winning the 2019 transit system of the year award really help put TransLink on the map. But TransLink is also known for making smart investments, expanding the system, and growing ridership. It’s just a cool place to be a part of.”

Of course, Quinn is tasked with initiating strategies to help rebuild ridership over the short- and medium-term, which is not a problem unique to TransLink given the impact of the pandemic.

He says the TransLink side of addressing the ridership problem deals with making adjustments and meeting demand now that people are returning on different schedules and times of the day. TransLink staff previously stated the pre-pandemic peak rushes have softened and are now more spread out.

The public transit authority is ready to adjust its services as employers welcome back their office-based staff and as more of the economy reopens, and everyday life with constraints resumes. This is already happening under BC’s restart, with ridership returning to about 50% of pre-pandemic volumes as of the middle of July 2021 — the highest since the onset of the pandemic in Spring 2020. Ridership will eventually fully rebound; it is just a matter of when.

Near-normal service levels during depressed ridership conditions are currently being sustained with the help of $644 million in operating funding from the federal and provincial governments, but this is only intended to cover the revenue losses through the end of 2021.

“Looking at customer experience, especially as people are coming back from 18 months from working at home, many people haven’t set foot on a bus or train in quite some time, so I think it’s really important that we continue to monitor services, ensure there is a good customer experience, keep an eye out of things like overcrowding, which is key coming out of a pandemic with people focusing on physical distancing.”

Quinn is joining TransLink at a time when major expansion projects are underway, specifically the Millennium Line Broadway Extension to Arbutus currently under construction, and the federal and provincial government’s recent funding commitment for the Expo Line’s Surrey-Langley Extension to Langley Centre.

Both projects are currently the provincial government’s responsibility, which will hand over jurisdiction to TransLink for operations upon completion.

Quinn is also tasked with guiding the final leg of TransLink’s Transport 2050 process of creating a new 30-year transportation strategy for the region. This new plan will identify key projects and priorities for investment, such as identifying specific corridors for SkyTrain extensions. With the future completion of the Broadway and Surrey-Langley extensions, the region will have accomplished its previous set goals under the previous transportation strategy.

He says that service expansion and capital projects will continue to be balanced with a state of good repair — conducting critical maintenance on existing infrastructure to better ensure reliability.

“I’ve heard loud and clear that we need to keep thinking regionally, and that the investments we make and improvements we prioritize all need to be considered with the whole region in mind,” he said.

“Some things come to me when it comes to regional equity. We need to make sure we’re able to focus on projects throughout the entire region. We’re not just helping one area or the other. We need to spread it around, and I think we have to recognize some areas are where major projects will be the key to success, but in other areas, it will be smaller improvements like sidewalk accessibility or a new queue jump for buses.”

Quinn commented that public transit expansion decisions need to be considered holistically with housing and active transportation. In his eyes, the region already excels at transit-oriented development.

“As an outsider coming in, I’ve been pretty impressed with the density around rail stations. Perhaps there is more work that can be done there, but on its face, I think the region has set up transit to be really successful,” he added.