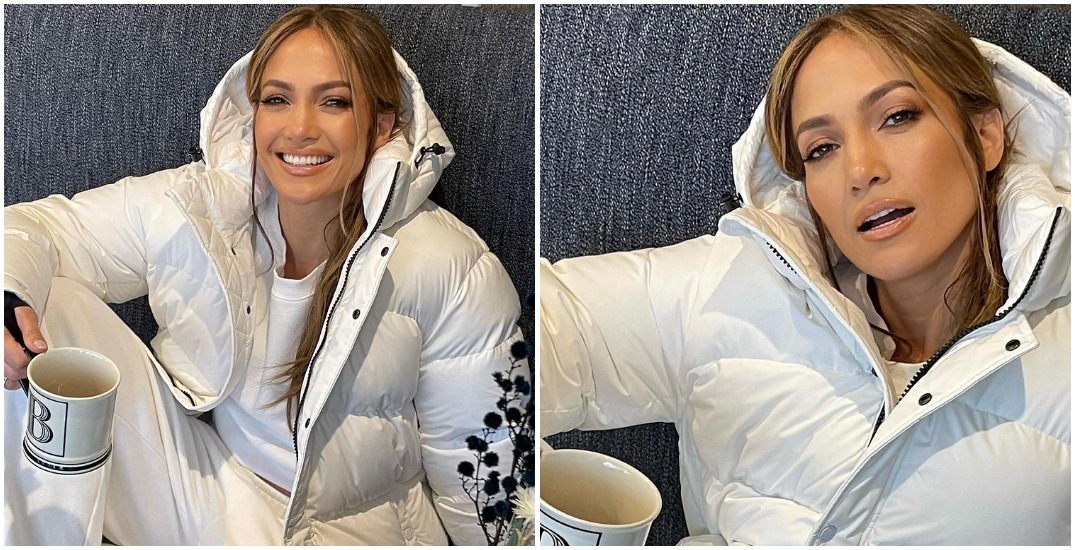 Jennifer Lopez is a fan of Aritzia.

She opted for a white “CliMATTE” version of the Canadian-designed puffer in the Original length ($250).

“Cozy morning in my Super Puff,” Jennifer wrote in the caption of the photo. “Thank you @Aritzia…I love it! #TheSuperPuff,” the On The 6 singer added, shouting out the retailer.

She wore the jacket over top a white sweatsuit from Aritzia’s TNA label, going with the Cozy Fleece Mega Cargo Sweatpant and Cozy Fleece Perfect Raglan Sweatshirt on top.

J.Lo was rocking her signature glow in the photo as she smiled holding a cup of Joe in a “B” mug — likely a reference to rekindled beau Ben Affleck, 49 (notably, the pair have a complicated history with Vancouver).

Aritzia’s social media team appeared to be thrilled with the shoutout, responding back to the star in the comments.

“Beautiful! We love it on you,” they replied with a white heart emoji.

Bennifer fans, however, couldn’t get enough of the “B” mug. “B AS IN BEN,” one fan gushed.

Several hours later, Aritzia’s official account re-posted the snaps. “@jlo in The Super Puff™ is the ultimate collab we didn’t know we needed,” they wrote.

She didn’t share where the photo was taken, however, Jennifer has been spending time in Vancouver as of late to shoot her Netflix series The Mother.

The series began production in the fall, filming action scenes around downtown’s Victory Square in mid-October. She also posted a social media update from the town of Smithers — which has a population of 5,000 people — just ahead of Thanksgiving. The project is expected to wrap on Jan. 22.

Jennifer has apparently been a fan of Aritzia’s Super Puff style for a while, rocking the cool Cushcord Birch version just after Christmas last year with a Christian Dior bucket hat.

An eagle-eyed Pinterest fan also ID’d an olive green jumpsuit as Aritzia’s Babaton label back in 2014.

The brand has been making a splash with the Super Puff in recent wears, with stars like Kendall Jenner, Hailey Bieber, Karlie Kloss, Shay Mitchell and Bella Hadid donning the style, just to name a few.

Ahead of Giving Tuesday, Aritzia also donated $1 million worth of winter coats — including Super Puffs — to those in need.

The brand recently introduced a second style of the jacket dubbed the Super Puff 2.0, which is totally water proof and windproof.