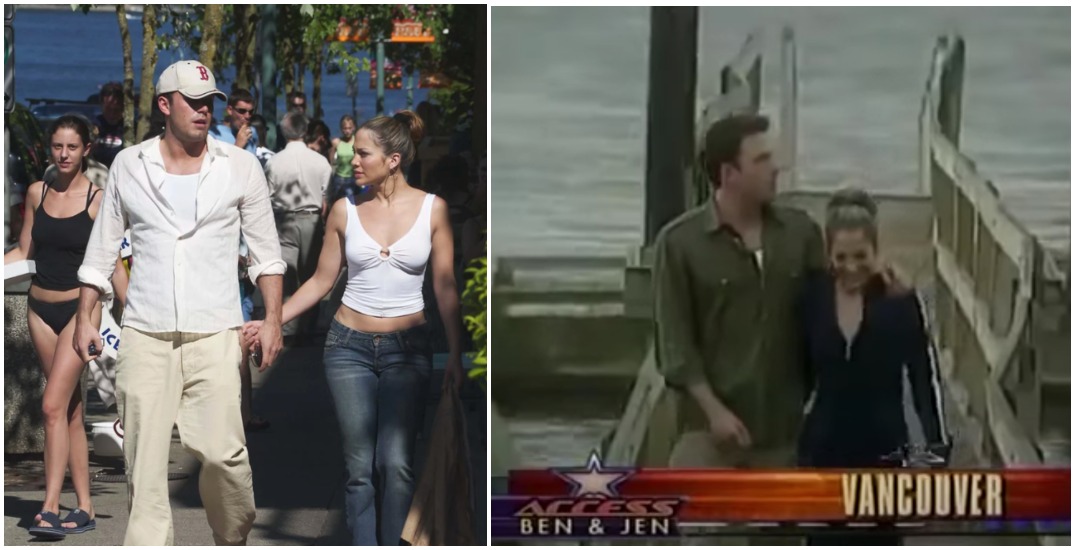 Get out your Juicy tracksuits and Louis Vuitton multicolour bags, because Bennifer is (apparently) back in fashion.

In case you’ve been living under a rock, it seems that the newly single Jennifer Lopez has rekindled her past romance with Ben Affleck. Yes, you just read that right: Jennifer Lopez, who was engaged to Alex Rodriguez about 3 weeks ago — and Ben Affleck. 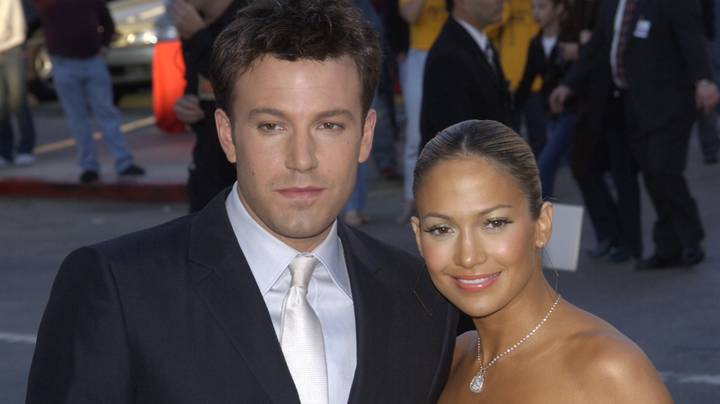 Ben Affleck and Jennifer Lopez are apparently back together 17 years after splitting because of his visit to a Vancouver. strip club. (Credit: Shutterstock)

While I had to make sure I wasn’t waking up in 2003 last weekend, the gossip genie delivered with not only photos, but video of the formerly engaged couple on a (seemingly romantic) getaway to Big Sky, Montana published by the Daily Mail.

From 2002 – 2004, the pair were colloquially known as Bennifer. Media frenzy hardly describes the hoopla that surrounded these two, making them one of the most iconic celebrity couples ever. 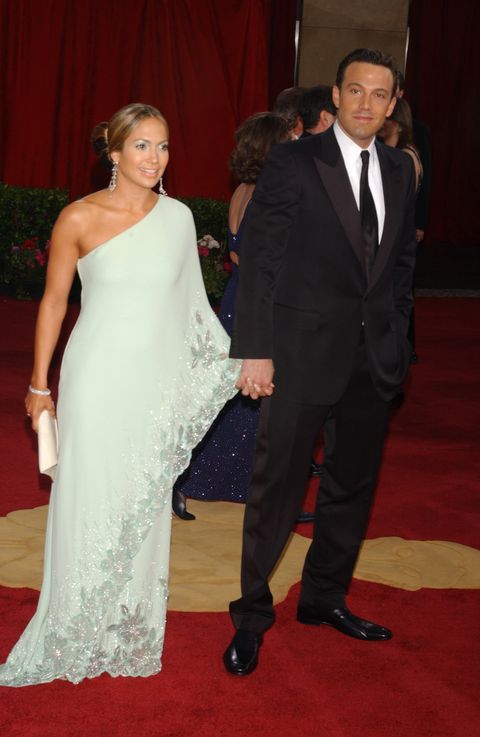 Between the Harry Winston pink diamond, an iconic Jackie O inspired Oscars dress and that “Jenny From The Block” video (where Ben paid an on-camera homage to her famous derrière), Vancouver was centre stage for a large part of their romance… and later, unfortunate demise. 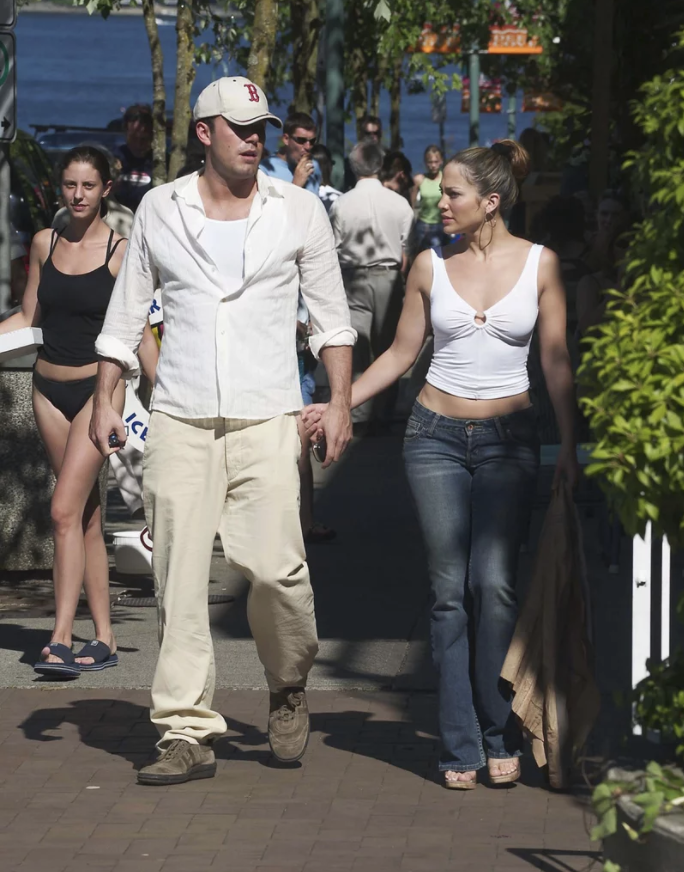 To rewind, the two met on the set of box office bomb Gigli back in 2002 when she was still married to back-up dancer turned reality star Chris Judd. Even if you love Ben and Jen, this film is not worth watching because, let’s face it — the real movie was in the tabloids.

By November of that year, he proposed to her with that $2.5 million pink diamond and platinum ring at his mom’s house in Boston.

After Gigli wrapped, the two signed onto their next films: Ben was set to star in 2003’s Paycheck, while Jennifer was cast in An Unfinished Life alongside Hollywood icon Robert Redford. Both films had one thing in common: BC shooting locations. Jennifer shot in Kamloops, but would return to Vancouver weekly to stay with Ben. 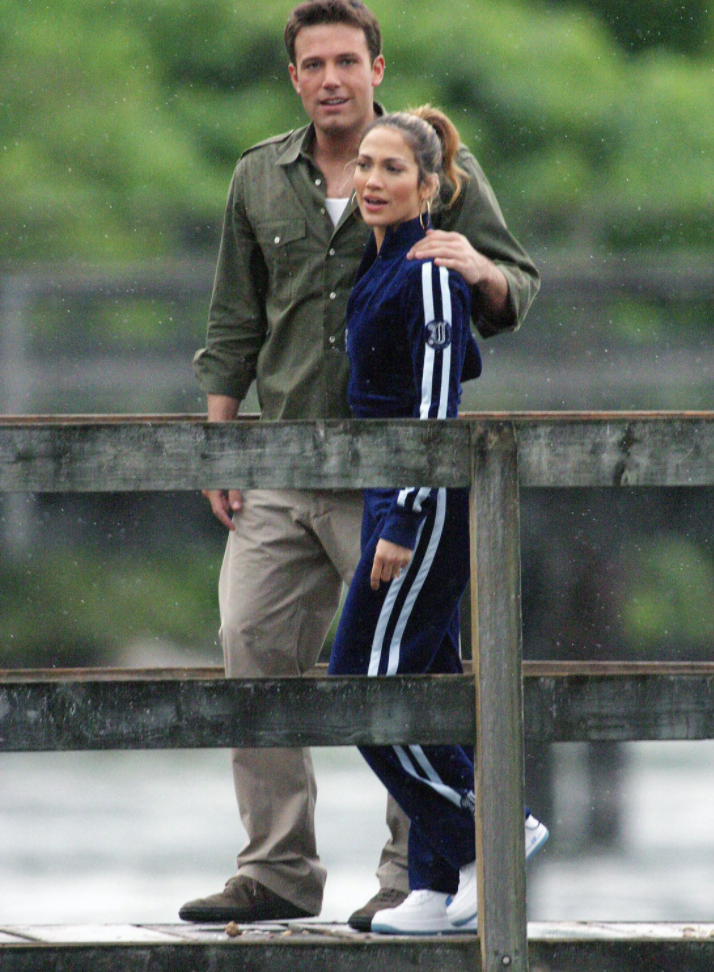 Ben Affleck and Jennifer Lopez are seen taking a stroll outside of their Deep Cove rental (Credit: Jeff Vinnick/Getty Images)

The Bennifer circus soon found itself taking over downtown Vancouver — more specifically, the Sutton Place Hotel. Sightings at the Sutton spa, Robson Street‘s Cin Cin and Opus Hotel sent local media and teenagers like myself into stalker mode. In fact, I even planned an entire sweet 16 birthday party at the Opus because of Bennifer.

Following J.Lo’s ABC sit down with Diane Sawyer where she confirmed the rumoured engagement, the two agreed to a joint interview together for NBC in July 2003. 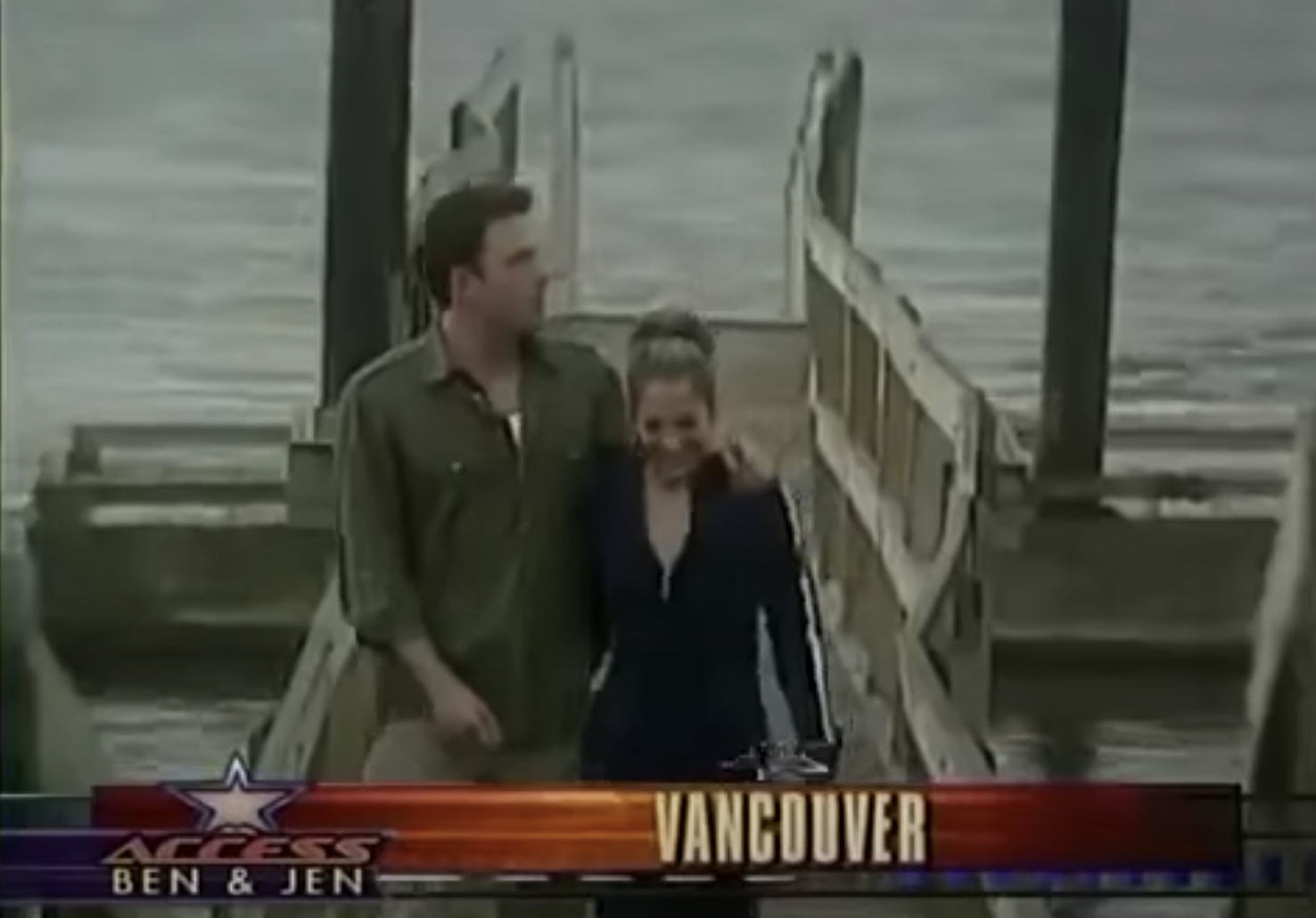 Their Deep Cove home was the location of a televised special on NBC’s Access Hollywood. (Credit: NBC)

Access Hollywood host Pat O’Brien flew up to conduct the chat at a rental home in Deep Cove. The two talked about wedding plans and paparazzi pressures inside the waterfront home, which included a secluded pier, private basketball court and breathtaking views.

“Do you realize how fascinated America is with you?” Pat asks at one point. “No, we don’t sit around and think about that — I make dinner,” Jennifer replies, later taking Pat into the kitchen of their “Canadian hideaway.”

“I like to cook on the weekends, that’s been my thing since we’ve been up here in Canada,” she explains.

Hours after the interview aired, Ben made an unfortunate (and ill-fated) visit to downtown Vancouver strip club Brandi’s with Christian Slater…and Tara Reid.

By Aug. 2003, details began to emerge about Ben’s not-so-kosher night out. Of note, that outing happened a week after buying J.Lo’s 34th birthday where Ben surprised her with a Rolls Royce.

According to stripper Tammy Morris, she and three other dancers took Ben into a private booth at Brandi’s. She alleged that Ben cheated with her in various interviews with The National Enquirer and the Daily Mail. Apparently, the party continued back at the Opus Hotel and then the rental home.

Days later, Jennifer had arrived in Winnipeg to begin working on Shall We Dance? as conflicting reports began to swirl that she had possibly removed her engagement ring. 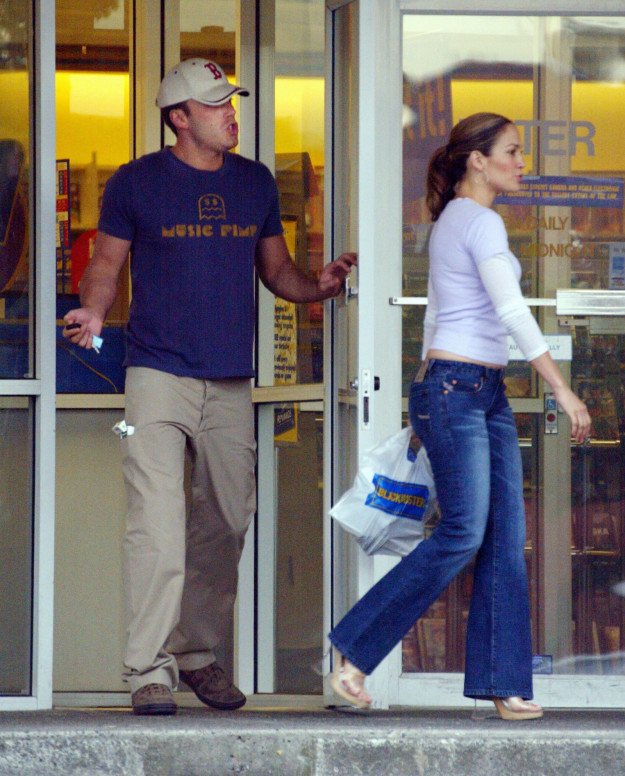 It wasn’t over for Bennifer just yet, but the writing was on the wall when they called off their Labour Day weekend wedding due to “excessive media attention.”

Eventually, they worked things out for a few more months before calling it quits for good in Jan. 2004.

Vancouver (and Brandi’s) is often cited as the reason for Ben and J.Lo’s break-up. What could have been if he never went to the strip club?

A chance at redemption for our pretty city isn’t out of the question, either: Ben’s next movie project Hypnotic has been moved to the Lower Mainland — at least as of Oct. 2020 — meaning there’s a chance Bennifer could be back here.

The film has experienced a number of delays due to COVID, but it seems director Robert Rodriguez plans to keep filming here (at least according to iMDB Pro) at some point.

Ben was also rumoured to have loved Deep Cove so much, he bought a home there. No word on if he still has it, but, hey — at least they’d have a place to stay.