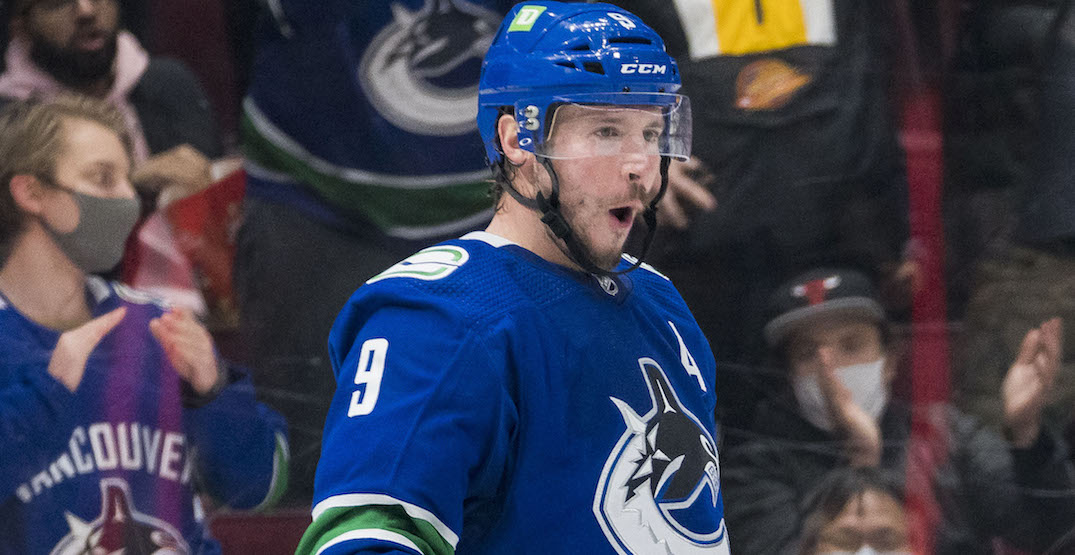 Over the past three seasons, J.T. Miller has easily been the best skater for the Vancouver Canucks.

So, if the Canucks plan on keeping Miller in the fold, how much is that going to cost them?

Miller is under contract for one more season beyond this year on a bargain contract carrying just a $5.25 million cap hit. He can begin negotiating a contract extension this summer.

Sportsnet’s Elliotte Friedman put a potential contract for Miller into perspective during an appearance on CHEK TV’s Donnie and Dhali.

Elliotte Friedman on the next JT Miller contract : It is going to be in Mika Zibanejad area. (8.5 million a year)

The Mika Zibanejad comparison makes a lot of sense. Since 2019-20, Miller is 13th overall among NHL players with 198 points. Zibanejad ranks 15th with 193.

In terms of age, both skaters were born a month apart. The main difference is that Zibanejad’s his mega-extension begins during his age 29 season, whereas Miller will be 30 by the time his next deal starts.

While Zibanejad is a solid comparison for Miller, here’s a look at three other contracts that were signed by other highly rated forwards in the same age bracket over the last 12 months.

If one thing is clear here, it’s that all of those contracts represent the absolute floor for Miller.

One thing to note here are the ages of each player when the contracts expire. For each of Hertl, Zibanejad, and Landeskog, the last year of their respective contracts is during their age 36 season. Couturier’s contract expires when he’s 37.

Even when looking at other forwards in that age 28-30 age bracket that have signed long-term contracts in recent years, it’s clear that most of them aren’t quite on Miller’s level.

There are players who do represent the ceiling for Miller. Those would be contracts like Mark Stone ($9.5 million) and Aleksander Barkov ($10 million).

When looking at deals signed before the 2021-22 season, we have to consider what percent of the cap the contract took up at the time.

That’s important to consider because the NHL recently announced that the salary cap will increase to $82.5 million for next season.

While that’s not much more breathing room for the Canucks to sign Miller, you can bet that the extra cap space will play a factor in negotiations.

With that being said, here are some players who profiled similarly to Miller based on production during their age 26-28 seasons.

From age 26-28, Miller’s 1.05 points-per-game is a level above Martin St. Louis 0.91 PPG rate. That being said, St. Louis was arguably more valuable than Miller when he signed his extension. By that point, he had helped Tampa Bay win a Stanley Cup.

Blake Wheeler is one of Miller’s strongest comparables. They’re both elite, big-bodied playmakers who experienced offensive breakouts in the latter half of their 20s. The main difference is that Wheeler’s first signed contract as a UFA occurred just prior to his age 33 season.

In terms of both the player and contract, Marc Savard might be one of the best comparables for Miller. Savard had scored at a point-per-game pace for three seasons before signing with Boston as an unrestricted free agent at the age of 29.

Although his deal was worth $5 million/season at the time, the contract took up 11.3% of Boston’s cap. That would equal a deal worth $9.2 million per season based on a salary cap of $81.5 million.

Term vs salary for Miller

This is the biggest question the Canucks must consider if they do sign Miller to an extension.

With his next contract set to kick in when he turns 30 years old, do the Canucks really want to sign him to a deal that takes him to 38 years old?

The Zibanejad comparison makes sense only if the Canucks were to extend Miller for eight years. If they do, then something in that $8-9 million ballpark makes sense.

However, based on the risk of signing players after the age of 35, the Canucks should consider if a five-year extension might make more sense, even if the cap hit is larger.

If that’s the case, then a Miller extension could be somewhere in the $9 million to $9.5 million range, similar to the deal that Savard signed with Boston at the age of 29. Although Savard was a superior offensive play driver, he also didn’t boast the physicality and penalty killing prowess that Miller does.

As Miller continues to score at an elite rate, the Canucks will have to grapple with the debate to extend him or trade him in the upcoming offseason.