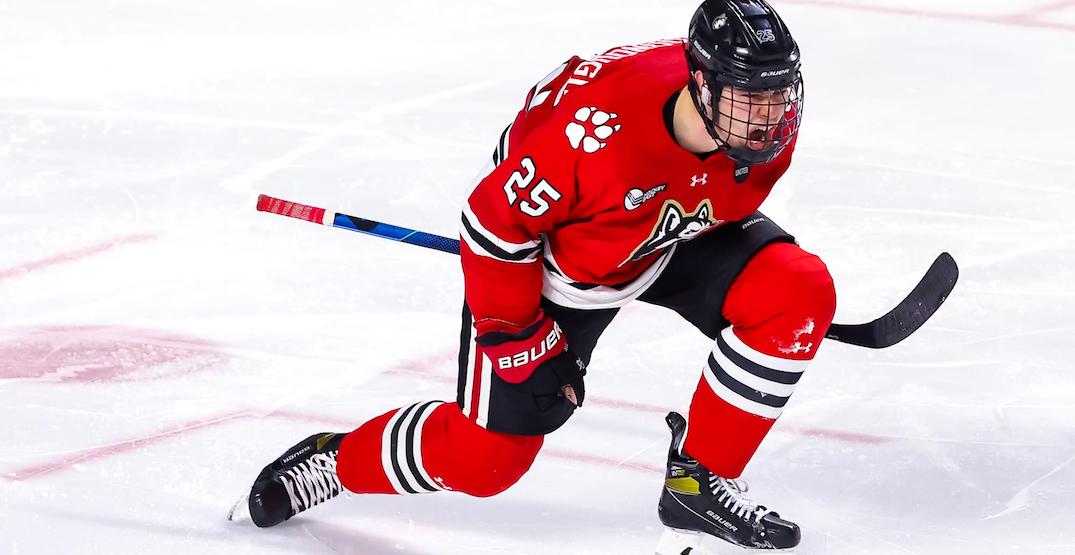 If Aidan McDonough is planning to leave the Vancouver Canucks organization as an unrestricted free agent next year, he’s a terrific actor.

The 22-year-old Canucks prospect has opted to return to Northeastern University for his senior year next season, rather than turn pro right away, as first reported by CHEK’s Rick Dhaliwal and Thomas Drance of The Athletic yesterday. The Canucks wanted to sign McDonough after his season came to an end on Friday.

The organization would have been able to get him into pro games right away, just like it did for Adam Gaudette four years ago. But McDonough chose a different path, and will now be able to sign with whatever team he wants to in the summer of 2023 if he chooses.

That’s the bad news, from a Canucks perspective.

The good news is McDonough said all the right things in an interview with Dhaliwal and Don Taylor on CHEK TV this morning.

McDonough said on Donnie and Dhali that returning to Northeastern was a “necessary step” to give himself the best chance at having a long pro career.

“I feel like the game nowadays is so fast and I feel like I still have a step to make… to get stronger and faster for another year,” said McDonough.

The 6-foot-2, 201-pound left-winger has a powerful shot but needs to improve his foot speed. He says he’ll be working with a power skating coach this offseason.

Completing his education, as well as getting a chance to be a leader for a championship-contending team next season, were good reasons to stay at Northeastern, according to the Massachusetts native.

“It was just not the right timing for me to feel comfortable with starting my professional career… I want to do what’s best for my development, and I think I’ve taken some steps over the last few years.”

McDonough said his goal is still to sign with the Canucks, the team that drafted him in the seventh round (195th overall) of the 2019 draft.

“I’ve been a loyal person my whole life,” McDonough explained. “Really loyal to the team that drafted me, especially taking me in the seventh round. They’ve treated me unbelievably. I think this is a great spot.”

While the management team that drafted McDonough has changed, he did speak glowingly about the new regime.

“The management’s vision for the club and the prospects, in the way that they want to develop guys and get a bunch of prospects into the system and develop them, and bring them along and let them be the best players they can be — I’m really excited for that vision,” he said.

“The Canucks were unbelievable… The GM Patrik Allvin was amazing. Ryan Johnson was amazing, Chris Higgins [too], they’ve all been so awesome with telling me what they think is best for me, but also really being respectful and supportive of my decision.

“We were amazed with the way that the new management and everyone has handled the situation, so nothing but amazing things to say about them… it’s really comforting to know that they have my back.”

Also working in the Canucks’ favour is that McDonough’s best friend, Jack Rathbone, is a member of the organization. He referenced Rathbone during the interview, saying that Rathbone had good things to say about the organization.

“I think this is a great spot for me… you want to go somewhere where they’re going to push you to be the best version of yourself, and I think that’s in Vancouver.”