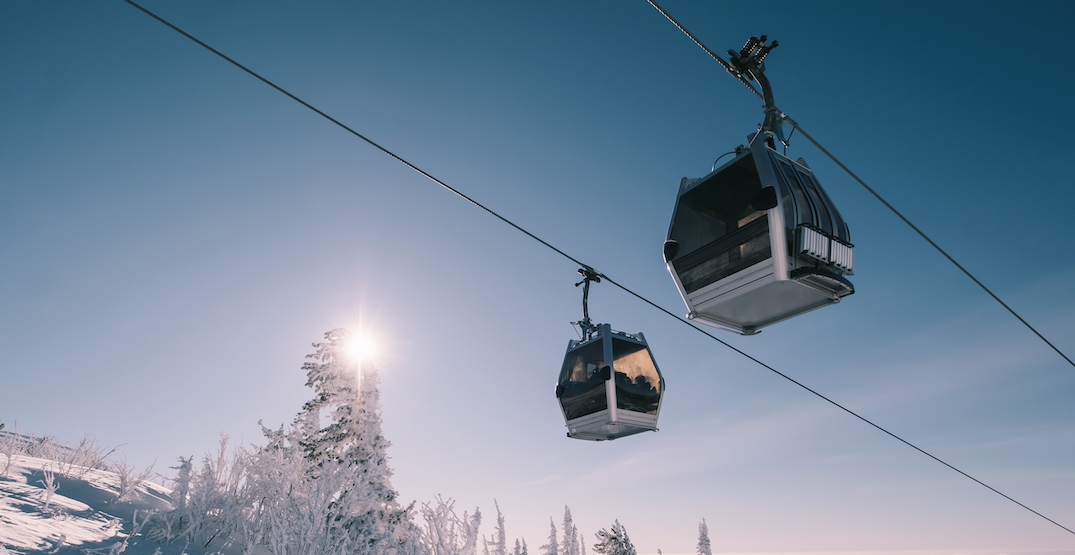 Example of gondola cabins at a ski resort. (Shutterstock)

The new owner of Grouse Mountain Resort is preparing to make major investments to greatly enhance access to the mountaintop attraction and visitor experience.

Operators have announced their plans to construct a new gondola linking the base area and parking lot with the plateau level. A preliminary development application was recently submitted to the District of North Vancouver.

This would be a full replacement of the 1966-built Blue Tram, which has been rarely used for visitors for decades, and is currently mainly only used to transport freight and in case of emergencies.

The gondola’s travel time is about 5.5 minutes each way, significantly shorter than the 10-15 minute travel time of the Red Tram.

Planned route of the new Grouse Mountain gondola (red), which crosses under the Red Tram. The Blue Tram, which will be decommissioned, is also shown. Click on the image for an expanded version. (Grouse Mountain) 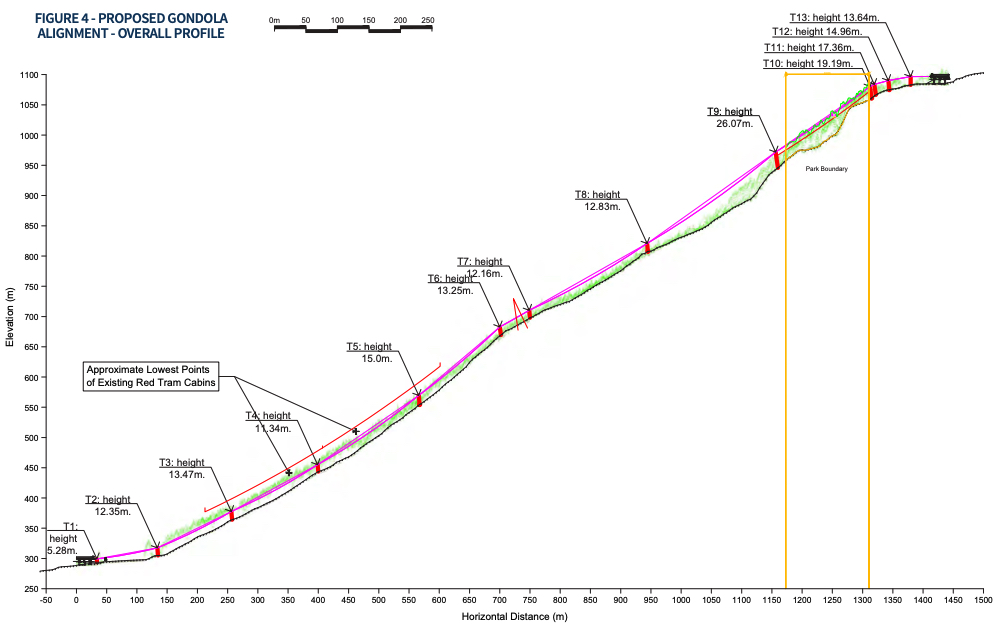 Elevation of the new gondola. Click on the image for an expanded version. (Grouse Mountain)

Described as a “state-of-the-art, world-class lift,” the new gondola consists of 27 cabins, with each cabin holding up to eight passengers. Unlike the existing trams, which use two large cabins, the gondola provides the ability for continuous boarding, helping reduce wait times and crowding. With only the use of the Red Tram, mountaintop lines for a ride down can sometimes stretch all the way to the Lumberjack Show area during busy periods.

Grouse Mountain has been operating at 50% of its original design capacity ever since the Blue Tram ceased being used for visitors, with the Red Tram only providing a capacity of about 900 passengers per hour. 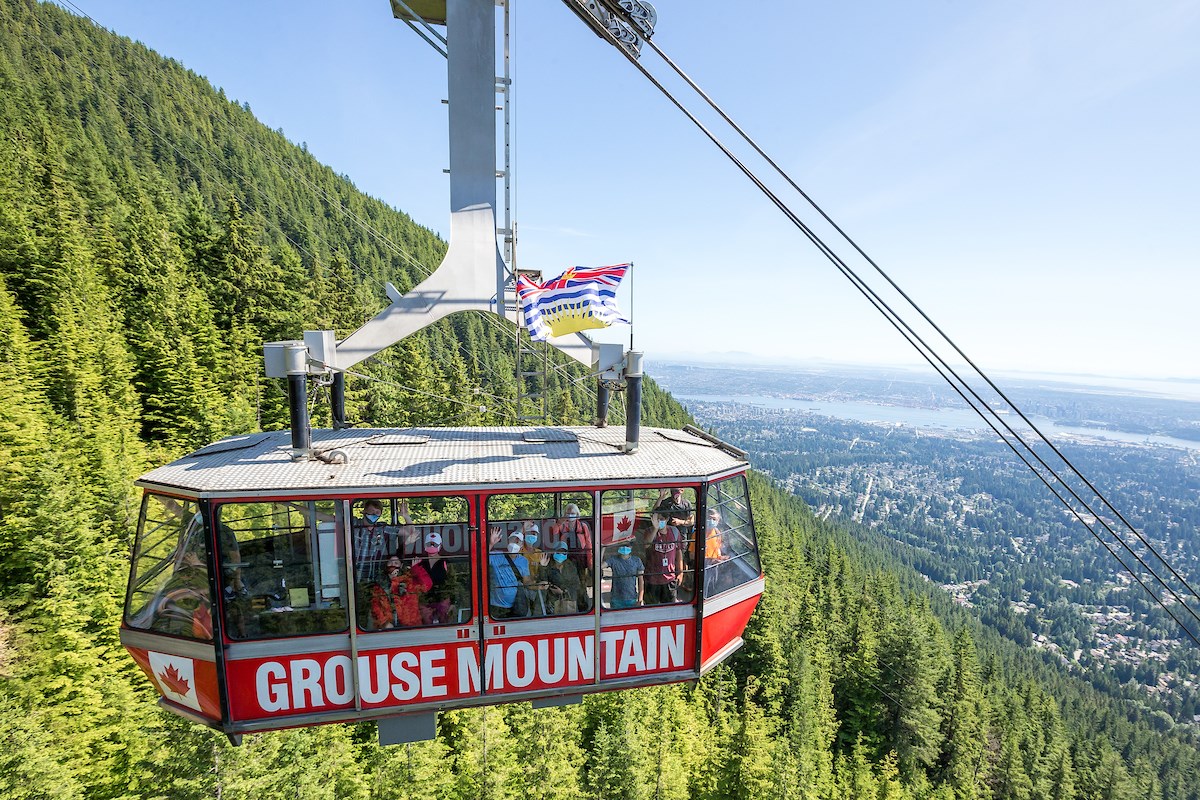 In addition to significantly improving the guest experience, the new gondola provides much-needed lift redundancy from potential mechanical failure, weather, and emergencies such as an evacuation. The need for seasonal closures of Grouse Mountain due to Red Tram maintenance would also be eliminated, most recently the week-long closure in November 2020.

The new gondola is also expected to allow for faster turnover in the parking lots.

The entire gondola project carries a budget of about $35 million and includes major improvements to the base facilities to improve the arrival experience.

The parking lots will be reconfigured to accommodate the gondola terminal, a new drop-off zone for the resort’s complimentary shuttle service to downtown Vancouver, and tour buses. The parking lot will also be expanded, with capacity increasing by 193 additional parking stalls — from the existing 925 stalls to 1,118 stalls across four lots. Improvements will be made to the existing area for TransLink’s public transit buses.

Existing configuration of the Grouse Mountain base area and parking lots: 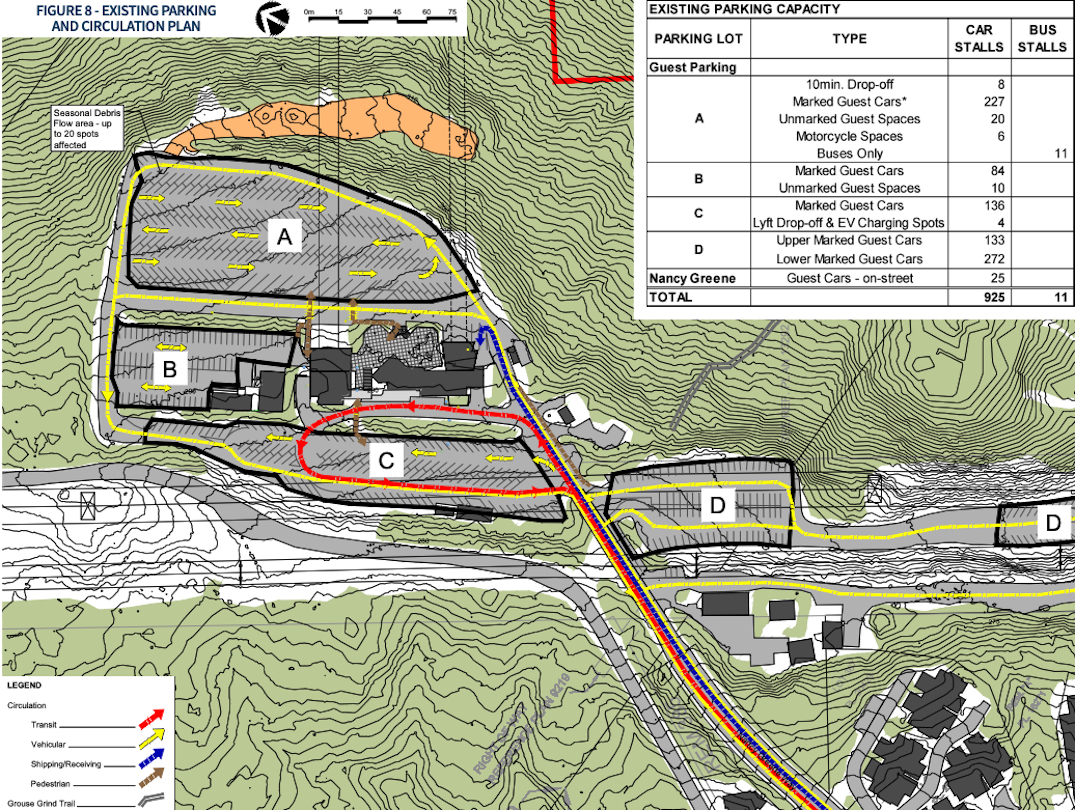 Existing configuration of Grouse Mountain’s base area and parking lots. Click on the image for an expanded version. (Grouse Mountain)

Future configuration of the Grouse Mountain base area with the new gondola and expanded parking lots: 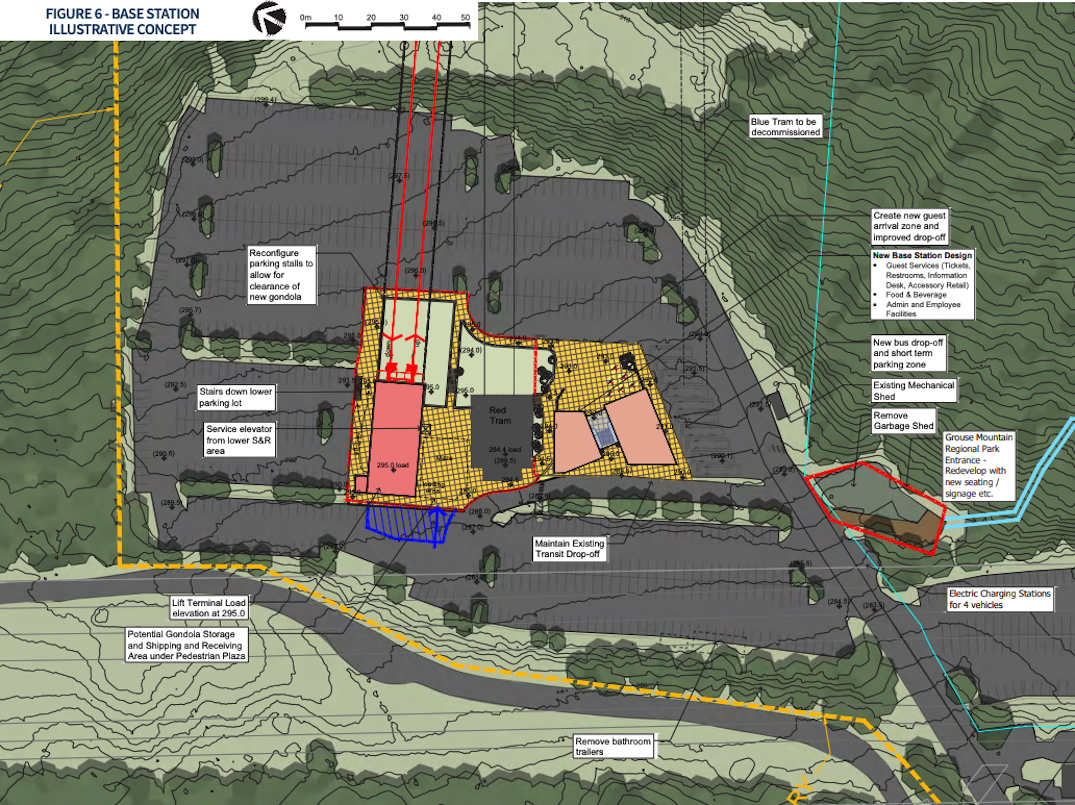 Future configuration of Grouse Mountain’s base area and parking lots. Click on the image for an expanded version. (Grouse Mountain)

An environmental review performed by project consultants shows a minimal impact, given that the gondola’s route is located within the existing tram corridor and previously disturbed areas.

Following approvals, construction is expected to 18 months to reach completion, with a December 2023 opening targeted.

The Blue Tram will be fully decommissioned and removed as part of the project. Its peak terminal is integrated into the mountaintop chalet. 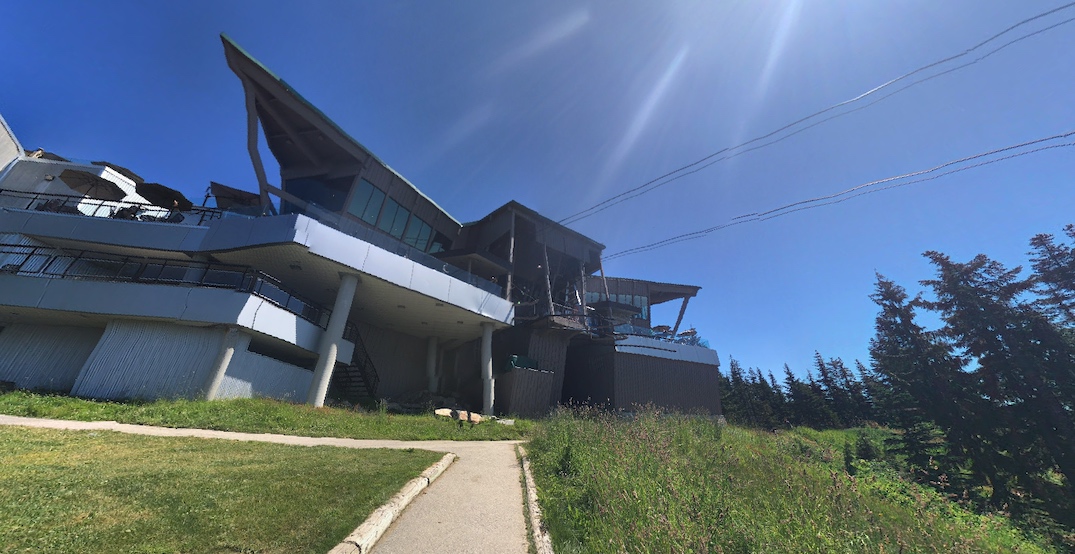 In early 2020, Grouse Mountain was acquired by Northland Properties Corporation, a Vancouver-based company owned by the Tom Gaglardi family. They own the NHL Dallas Stars, three restaurant chains (Moxie’s Grill & Bar, Chop Steakhouse & Bar, and Denny’s Restaurants), and over 50 hotels across Canada, including the Sandman Hotel Group and The Sutton Place Hotels brands.

Additionally, they own a number of ski resorts, including Revelstoke Mountain Resort and Selkirk Tangiers Heli Skiing, and are a key partner with Aquilini Investment Group in their plans to build the long-envisioned $3.5 billion Garibaldi at Squamish ski resort.