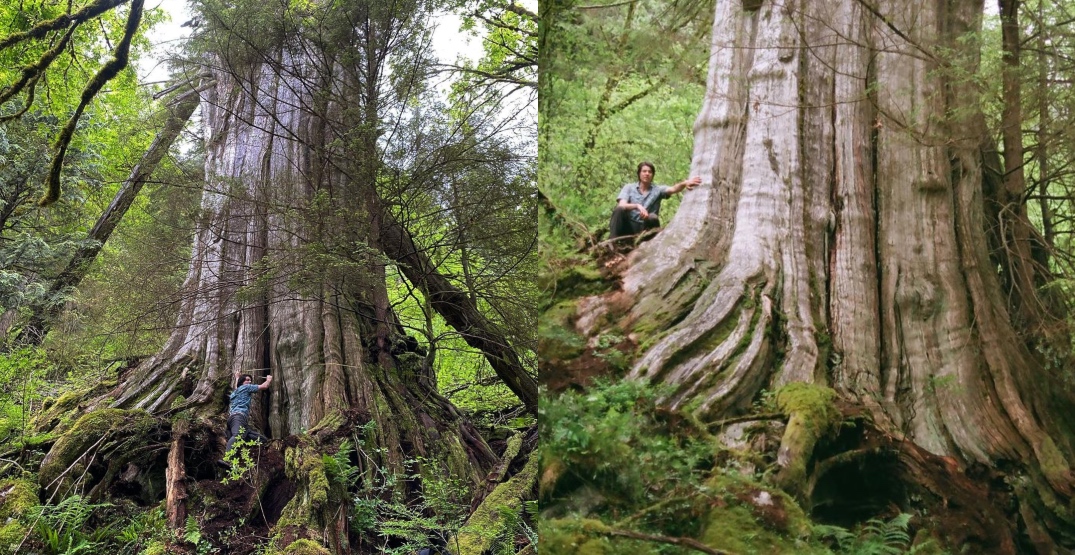 A giant cedar has been discovered in a remote part of North Vancouver and it’s one of the largest left of its kind.

According to a release from the Ancient Forest Alliance, two big tree hunters – Ian Thomas and Colin Spratt – found an ancient western red cedar nicknamed “The North Shore Giant.” It’s estimated to be about 5.8 metres (19.1 feet) in diameter.

Spratt posted photos of the find on social media. “This cedar has been growing for easily 2000+ years,” he wrote in a post.

“My goal has been to show people that in Vancouver it’s still possible to find Canada’s largest trees still alive and growing,” he said.

“I’m glad to keep the dream very much alive that much bigger trees still hiding out there (waiting) to be found.”

They found the tree as they were exploring Lynn Headwaters Regional Park in North Vancouver.

The Ancient Forest Alliance said in a release that the tallest trees on earth might have once grown in Lynn Valley, “but aggressive logging in the 19th and early 20th centuries eliminated most of those superlative forests.”

“Luckily this incredible being and the impressive grove in which it stands is safe in a park. Most of our richest ancient forests are still unprotected and in danger of being logged.”

“Even now in Canada, in the year 2022, trees as old as this giant, and entire groves like this one, are still being cut down on an industrial scale,” said Thomas.

The pair of tree hunters found this beast after 10 hours of bushwhacking, so don’t expect to find it on your next hike in Lynn Valley. Still, it’s magical to know that there are giants in the mountains nearby.

“Finding this tree is an incredible reminder of what is still out there in the less explored old-growth forests,” said Spratt.