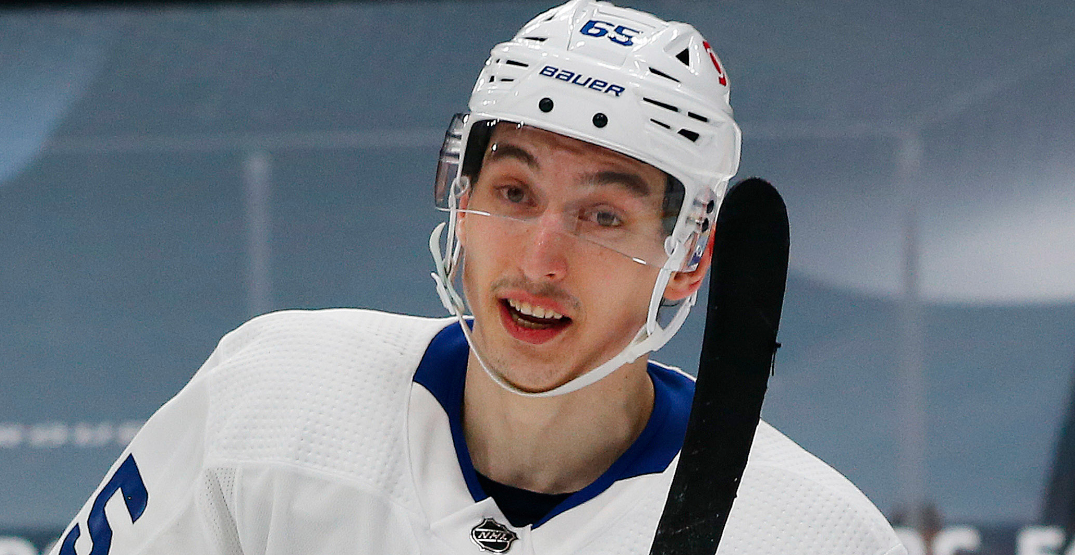 Although we previously wrote about Mikheyev as a potential UFA target for the Vancouver Canucks, the team’s lack of cap space made it appear unlikely that they’d be in the market to make a splash during free agency.

So much for that logic.

The Canucks made Mikheyev their big addition during the first day of NHL free agency by signing the speedy winger to a four-year deal worth $4.75 million per season.

Here are seven fun facts about the Canucks’ big addition in free agency.

During one of Mikheyev’s first press conferences as an NHL player, he gave an offbeat response when asked about the challenges of moving from Russia to Toronto.

At first, he talked about the language barrier.

Then, he dropped this nugget.

Mikheyev said it's been a bit of a culture shock living in Canada. He said he doesn't understand why we don't like soup more.

This led to him earning the nickname “Souperman.” His handle on Twitter is currently @Souperman65.

Mikheyev’s agent, Dan Milsten, had an epiphany after his client’s soup comment.

“As soon as he said what he said, the light bulb went off,” Milstein said in an interview with Forbes. “And I basically said, ‘I’ve got to find him a soup company.’”

Four months after his soup-loving confession, Mikheyev inked a deal with Campbell’s Canada to become their “Chief Soup Officer.”

Since then, he’s appeared in a number of soup commercials for Campbell’s.

After goaltender Jack Campbell joined the Maple Leafs, he started hearing “Soup” chants from the crowd whenever he’d make a save.

Just when there was about to be some nickname confusion between Mikheyev and Campbell, the Russian winger discussed his new nickname, “Cobra.”

Here's the full Ilya Mikheyev clip talking about his "cobra" nickname and being afraid of snakes. pic.twitter.com/YWGg2ign4u

The nickname stemmed from comments about Mikheyev’s injured wrist resembling a cobra.

Ironically enough, Mikheyev admitted that he’s not a fan of snakes.

There’s a good reason why Mikheyev’s arm resembled a cobra.

Back in December 2019, the rookie NHLer had his wrist accidentally slashed by falling New Jersey Devils forward Jesper Bratt.

Mikheyev was rushed to hospital in Newark, New Jersey, where he had to have emergency surgery to repair a severed artery and tendons in his wrist.

Leafs General Manager Kyle Dubas reportedly went “above and beyond” following Mikheyev’s injury. According to the winger’s agent, Dubas spent three days with Mikheyev in hospital right around Christmas.

You tell me, is this foot speed worth $4.75 million per season?

That’s yet to be determined, but Mikheyev’s straight-line speed is utterly impressive.

Ilya Mikheyev as he beat Connor McDavid to the puck pic.twitter.com/4uQgUSZ1YJ

The undrafted free agent from Omsk, Russia played with his hometown team during his four seasons in the KHL.

It wasn’t until the 2017-18 season that he began to hit new heights offensively. Mikheyev led his team in scoring in two consecutive seasons before signing with the Maple Leafs.

During his last KHL season in 2018-19, the second-leading scorer on Omsk behind Mikheyev was former Canucks prospect Sergei Shirokov.

Shirokov was a training camp phenom with the Canucks back in 2009. He beat out top prospects Cody Hodgson and Michael Grabner for roster spots prior to puck drop on the 2009-10 regular season.

However, his hype was short-lived, and he played just eight total NHL games across two seasons, scoring once.

Aside from Shirokov, Mikheyev played with some other familiar names in the KHL, including BC native and former NHLer Cody Franson, along with the Canucks’ sixth-round pick in 2018, Artem Manukyan.

Although Mikheyev’s contract might be a bit rich based on his true value (The Athletic’s model pegged his true value at $4.1 million), the winger reportedly turned down offers that would have paid him more.

Ilya Mikheyev had paired his list down to 8 teams and picked the Canucks after that. He had better offers money wise but likes the direction the Canucks are going in.

Agent Dan Milsstein says Mikheyeh is in Russia now and will arrive in VAN in August.

Apparently, this isn’t the first time the Russian has taken a pay cut. At least, that’s the case according to his agent.

“Ilya decided to step off a little bit from an already agreed number to help the team fit under the cap,” Milstein told Sportsnet back in 2020.

“For Ilya, it was less about the money, but more about the role in the organization. He wishes to win the Stanley Cup. It’s been a lifelong dream.”