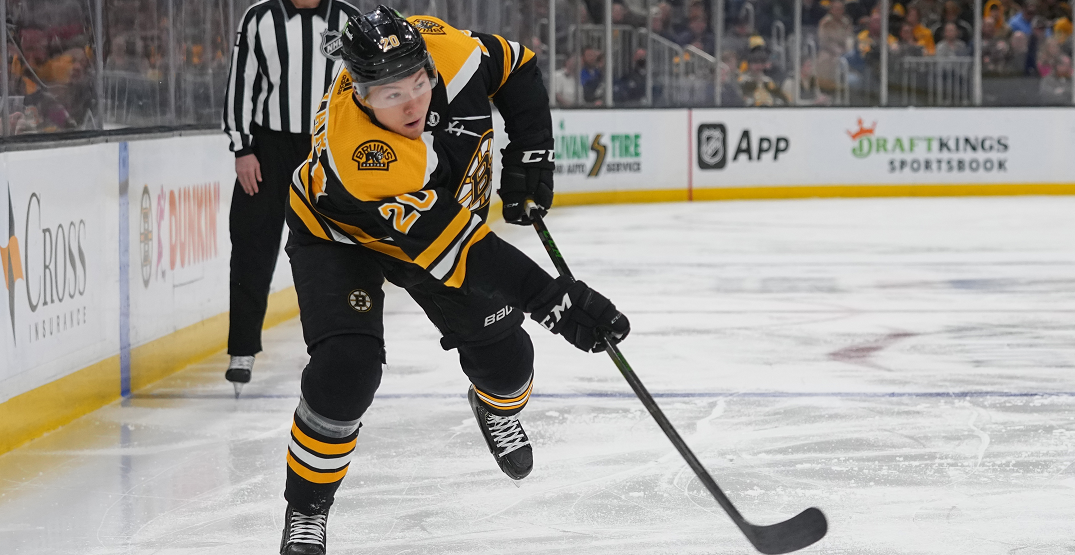 Salmon Arm, BC native Curtis Lazar is coming home to play for his favourite team growing up after signing a three-year, $3 million contract with the Vancouver Canucks on the opening day of free agency.

“Being a home province kid, I grew up cheering for the Canucks,” Lazar told the media on Wednesday.

“I got a very big soft spot for [the Canucks] and the organization. My passion towards the game was all generated watching the Canucks over the years growing up.”

Get to know more about the Canucks’ new addition with these seven fun facts.

That’s one way to endear yourself to this fanbase.

When asked by the media about Canucks players he liked growing up, here’s what Lazar had to say.

“[Matt] Cooke, [Raffi] Torres, the late Rick Rypien, watching those guys inject that energy out there was pretty fun.”

Lazar went onto mention Kevin Bieksa, Ryan Kesler and Alex Burrows as some of his other favourite Canucks.

In a 2013 interview, Lazar also cited Ryan Getzlaf as his favourite NHL player, and Joe Sakic as his hockey hero.

From a young age, Lazar set a high bar for himself.

Although Lazar’s NHL career began in 2014-15, the Ottawa Senators allowed him to play for Team Canada during the 2015 World Junior Ice Hockey Championships.

Lazar and the Canadians beat Russia 5-4 in the gold medal game.

So much for being shown the ropes.

As a 19-year-old Lazar made his NHL debut for the Senators in 2014, then head coach Paul McLean put him on a line alongside two other Senators rookies: Mark Stone and Mike Hoffman.

The trio was soon called “The Kid Line.”

In fairness, both players were a few years older than Lazar. Stone was 22, and Hoffman was 24.

Ironically enough, both Stone and Hoffman had breakout seasons for the Senators that year. Stone posted 64 points and Hoffman scored 27 goals.

Lazar finished his rookie season in Ottawa with six goals and 15 points in 67 games.

5. Ate a hamburger off of the ice

During Andrew “The Hamburglar” Hammond’s incredible run in 2014-15, Senators fans through McDonalds hamburgers on the ice after a 6-4 win on March 19, 2015.

Lazar infamously picked up one of those burgers off of the ice and ate it.

“It was disgusting. I’ll never do anything like that again,” Lazar said during a 2021 interview with The Athletic. “

“I love a nice burger. But who knows the backstory behind that one? They didn’t buy it during the game, so it was at least a couple hours old depending on when they got it — the day before, lunch or whatnot. It was a little stale.”

Despite an illustrious junior career that resulted in him being a first round pick, Lazar’s journey through professional hockey hasn’t been smooth.

After regressing in Ottawa, Lazar was traded to the Calgary Flames at the 2017 trade deadline.

Then, after continuing to struggle with the Flames, Lazar ended up in the AHL with Calgary’s affiliate in Stockton for the entire 2018-19 season.

“It took me a while to figure it out,” Lazar told Canucks media on Wednesday. “My career got off to a pretty slow start. Being a first-round pick, you’re selected to put the puck in the net and be that top-six presence.

“Ultimately, [it] just didn’t turn into that.”

That year in the AHL did help revitalize Lazar’s career. He signed with the Buffalo Sabres during free agency in 2019 and hasn’t played an AHL game since December, 2019.

The Lazar family will never forget this eight-day stretch back in April, 2021.

Lazar and his wife Reanne welcomed their first child, Owen Beckham Lazar, into the world on April 4th.

Eight days later, Lazar was part of a blockbuster deal when he and Taylor Hall were traded from the Sabres to the Boston Bruins to Anders Bjork and a second-round pick.

Lazar spent the entire 2021-22 season with the Bruins, cementing himself as a fourth-line, penalty killer while scoring a career-high eight goals.