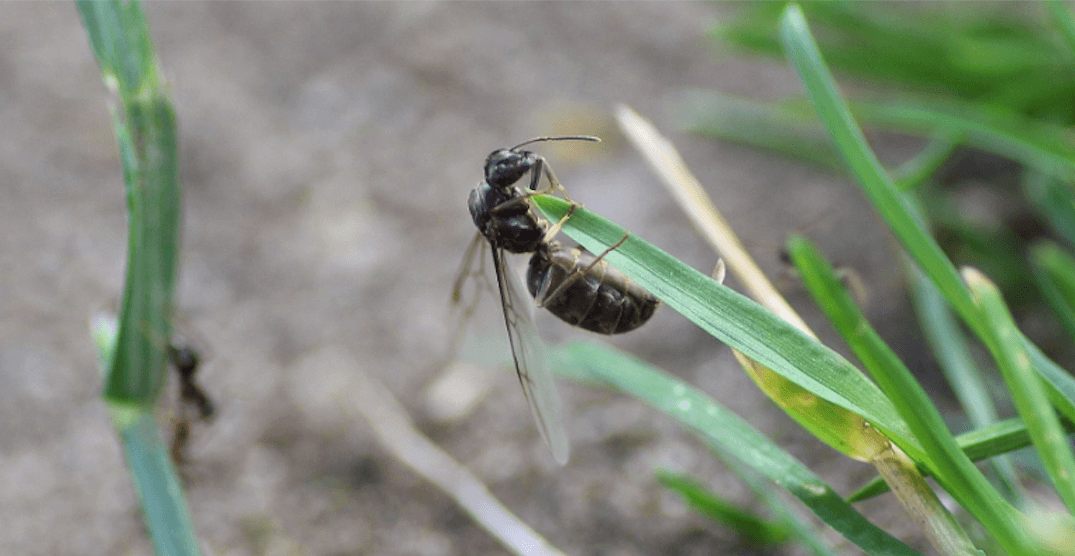 A flying ant on a blade of grass. (Danielle Hoefele / Twitter)

This week, residents throughout Metro Vancouver have been dealing with visits from one of Mother Nature’s weirdest pests: flying ants.

And on Wednesday, the situation was particularly creepy.

On Reddit, people asked if it was officially  “Flying Ant Day” in Vancouver and judging by the comments, it might have been.

“Swarms” of flying ants were reported in various locations throughout the city, including near 41st Avenue and Victoria Drive, West Broadway in Kitsilano, Queen Elizabeth Park, and SE Marine Drive. Flying ants were even reported in places like Burnaby.

Others expressed their experience/observation/terror of the situation on Twitter.

I knew nothing of flying ant day? Wtf? #vancouver

Ok so I wasn’t going crazy. It was flying ant day in Vancouver today.

There’s literally thousands of flying ants out in Vancouver today and I am NOT having it. 😷

Oh right… giant flying ant season.
My favorite time to be a cyclist in Vancouver.

Happy Flying Ant Day to the Vancouver area! Here’s 30 queens I caught only on the short path in my yard. pic.twitter.com/Q8DK76Tnfz

Wtf is with the swarms of flying ants in #Vancouver?? Is it the second coming of the plague of locusts? 😩😩😩 they are EVERYWHERE

I’m no ginger and 28 degrees is enough to make me sweat. That’s hot for Vancouver Island. Can we please not all just gloss over the FLYING ANTS though!!

According to those in the know, Vancouver’s unofficial, official ant day in the city is the height of the ant mating season.

Danielle Hoefele, a Masters of Pest Management student at SFU, tweeted that it’s the day “when winged queens and winged males fly, mate, and find new nest locations. Good day to be an ant, great day to be an ant-eating bird.”

She added that while flying ants can be a disturbing experience, residents needn’t worry too much.

“These are not fire ants. They are Lasius [species] which are harmless.”